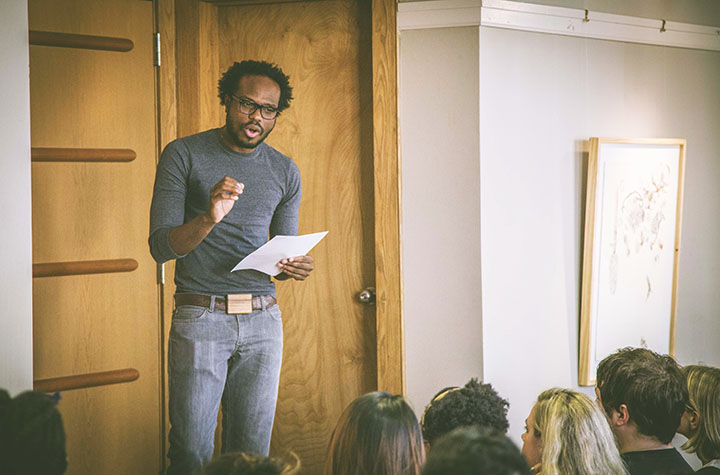 The hum of machinery, automobiles, and the beating pulse of life within oneself are the prominent themes running through Detroit native Jamaal May’s 2012 Beatrice Hawley Award-winning book of poetry, Hum. The rhythmic vibration of language and alliteration bleeds through the page, allowing readers to feel the beat of emotion as the poems reveal urban settings tainted by crime, drugs, and machinery.

Dark pages scatter the book, starting with black and gradually lightening to gray, each showcasing a poem written about a phobia. The first phobia poem, “Athazagoraphobia: Fear of Being Ignored,” dives into a list of ways the speaker tries to gain attention from peers, parents and significant others.

I pierced my eyebrow, inserted

a stainless steel bar, traded that for a scar in a melee, pressed

tongue to nipple in a well-lit parking lot, swerved

into traffic while unbuttoning my shirt –

The poems explore city life where bullets scatter the ground, needles are found in the grass, and children watch “the teeth / of the handcuffs close around your wrists the way / a perched bird watches: quiet, flinching at slight sounds.” With such a harsh environment, it is realistic to live with the phobias depicted in “Hum,” each child growing up seeing and knowing more than they should.

May sets some poems in couplet stanzas, prose and concrete formats, each fitting the message and making the voice thrive. In one poem, “I Do Have a Seam,” he arranges the words of the poem to look like ribs, illustrating the seam that the speaker wants a woman to stitch. The speaker allows his heart to hum for this woman, saying “I’ve always wanted / to be the thread, spooled through / the sewing machine of your hands.”

The poet digs to the bottom of inner-city culture and reveals acts with such vibrancy that the emotions and actions can be felt through the pages. May unveils broken Detroit and the struggle for life, love and happiness with undeniable passion.