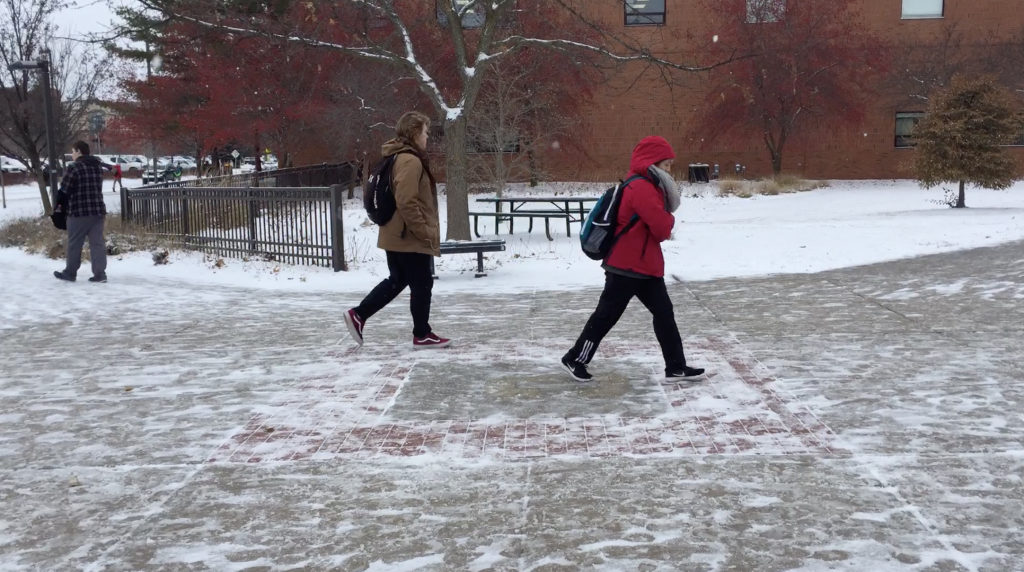 Finals week can be a stressful time for many students at Central Michigan University.

One reason to worry about finals that most may not think about?

Stepping on the ‘C’ near the Dow Science Building.

There are many myths about what could happen to those who steps on the C.

“Supposedly you will fail your finals if you step on the C,” Matthew Boak, a CMU senior majoring in political science said. “I do not believe that superstition is real—I have stepped on that C many times and have yet to fail a final exam.”

Boak, who found out about the myth his freshman year after a few older students told him to be careful of it, has intentionally stepped on the C multiple times.

“One time I actually laid down on the ground and rolled over the C with my body to prove that it was just a myth, no lie,” Boak said. “Maybe stepping on the C is lucky, because I’ve done very well on all of my final exams so far and this is my fourth year stepping on the C.”

Other students like CMU senior Anna Macdougall majoring in biomedical science won’t even risk getting bad luck by stepping on the C.

“I’m a very superstitious person. I through salt over my shoulder, spin around three times, all of that,” Macdougall said. “I always avoid the C by the science building. As a biomed major I do not want to take a risk with any of my science grades. I also avoid the circle by Grawn Hall; I never walk inside of it, I always walk around.”

As myth would have it, if you walk inside of the Greek circle outside of Grawn Hall where the seal used to sit, you are allegedly doomed to do one of two things. If you are a senior and you step within the circle, you could unfortunately be a super senior, spending a fifth year on campus. If you’re not a senior, then you could fail your next exam.”

“I haven’t heard of anyone stepping on the C and failing their finals, or stepping inside of the Greek circle and staying hear an extra year or anything like that,” Jordan Scrimger, a junior majoring in sociology said. “I think when you’re worried about something you’re quick to attribute bad luck to things that are completely unrelated. Correlation is not causation. It may just be coincidence.”

Whether this superstition is true or not, it’s certainly true that finals week can be a source of stress and worry for CMU students as the semester comes to a close.

“If you believe that stepping on or in these spots on campus will give you bad luck, then don’t do it,” Scrimger said. “Minimize your stress and avoid them. Finals week is already stressful. Do all that you have to in order to stay relaxed and do the best you can.”

Can you tell who stepped on the C and who avoided it?