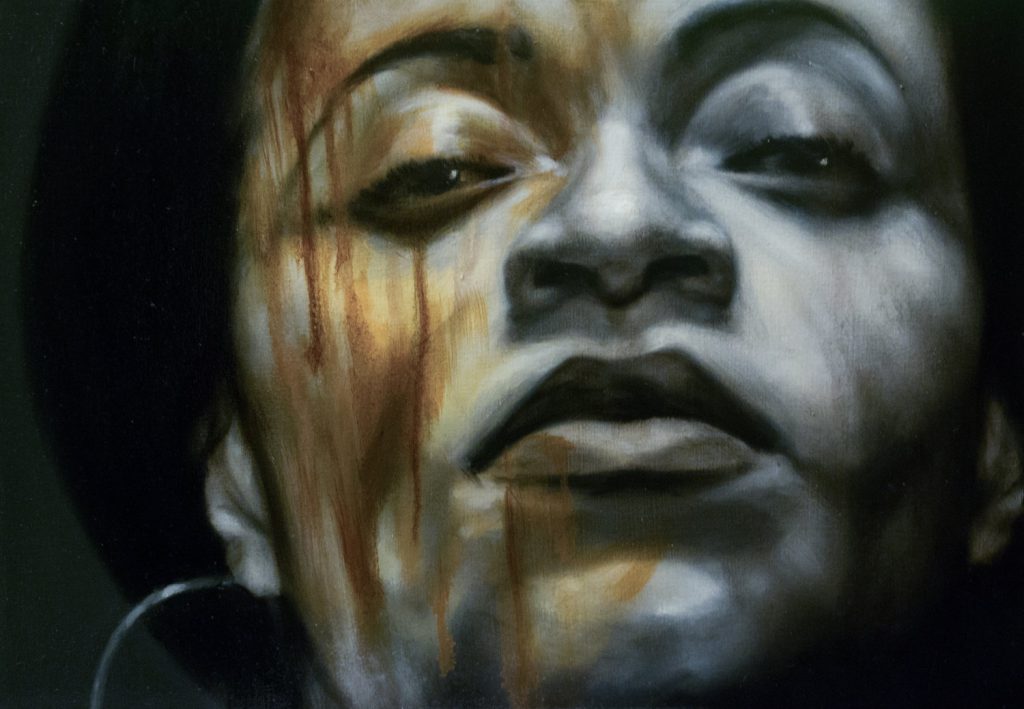 The Center for Inclusion and Diversity is showcasing several paintings by Detroit artist Waleed Johnson for the duration of Black History Month.

The paintings from Johnson’s “Misconceptions” series are portraits meant to show the effects that a lifetime of marginalization has on a person’s sense of self.

“I wanted to use those faces to represent the emotions, like sadness, pain, and fear, all of that, that are the result of being marginalized,” Johnson said. “I wanted to capture that story.”

Each piece is dominated by the face of an African-American whose skin seems to be dripping off of their face. As the rich brown tones of their skin are washed away, their faces are left nearly colorless.

The expressions in the portraits are stoic, but infused with a sense of unease. Many gaze out of the side of their eye, or seem to be pulling their faces away from the viewer.

“I viewed the faces with dripping paint as representing stains on skin that some people view dark skin as,” Lauren Grotkowski said, the Graduate Assistant for the Office of Diversity Education who selected Johnson’s work for display.

Johnson’s art focuses on people of color and his hometown of Detroit. His series “Speramus Meliora; Resurget Cineribus,” Latin for “We hope for better things; it will arise from the ashes,” consists of frenetic paintings of decaying Detroit homes and churches.

Each painting’s frame is made of wood salvaged from actual Detroit buildings destroyed in fires. An ongoing series of portraits called “Reflections” features faces painted on acrylic glass and mounted on a reflective surface, so that unpainted portions will reflect the viewer’s face and demonstrate the idea that anyone can see part of themselves in anyone else.

The goal of Johnson’s art is to “create emotional, thought-provoking pieces that the viewers are able to connect with.”

“I feel like a lot of people can connect with emotion and our shared humanity,” Johnson said.

Johnson wanted to be an artist from a young age, but before high school ended he hadn’t advanced much beyond pencil drawings. He settled somewhat unwillingly for an engineering degree from the University of Notre Dame.

Just as his degree was nearly completed, he was encouraged by friends to enroll in a five-year program that would earn him a Bachelor’s degree in studio art on top of his degree in computer engineering.

The program is meant to give the creators of tomorrow’s technology a better chance to understand the world they’re creating it for.

“I didn’t really think of it as something I would use,” Johnson said. “It was just like, I learned some stuff about art, and kind of in some ways fulfilled this goal I had when I was younger about studying art, and that was pretty much it.”

He returned to Detroit to work as a software engineer at Ford Motor Co., but the itch to create art returned.

Using some leftover hand-stretched canvases from college, he began painting after coming home from work. He approached Detroit Fiber Works, a boutique fiber art store and rotating art gallery to display some of his pieces. To his surprise, they accepted.

“The Detroit community is so small, people are receptive to new artists and they will send your name around,” Johnson said. “There are opportunities. It’s easier to get engaged within the community than if I was in some other giant city like Chicago.”

Johnson sold a piece at the Detroit Fiber Works show, and since then his art career has been “snowballing.”

He’s been influenced by the growing art community and the sense that anything is visually possible in Detroit.

“There’s a lot of art in places you wouldn’t expect, and I feel like that’s kind of how Detroit operates,” Johnson said. “It kind of does its own thing. People are like ‘I have this idea, doesn’t matter if it’s in the downtown area, I’ll put it wherever I want to.’ I feel like there’s a lot of cool hidden art.”

Going forward, Johnson is hoping for more opportunities to make art that can be a part of public life.

“[The Parker Village mural] got me thinking of the power of public art, and what you can do in that space and then in relation to Detroit, just thinking about where I grew up at and how those areas would benefit from having public art,” Johnson said.

Johnson is dipping his toe into the art community. It’s a hobby he does in addition to his work with Ford, and before that balance can shift, he wants to learn more about how to conduct himself as a businessman in the art world. He’s learned not every opportunity is a good opportunity; not everyone is willing to pay you what you deserve.

“People don’t really value the time of creatives, so you really have to be your own advocate,” Johnson said.

You can find more of Johnson’s art on his website and Instagram. His pieces from the series “Misconceptions” will be in the Center for Inclusion and Diversity in UC 108 until Feb. 28.