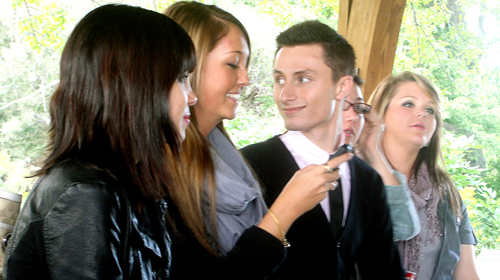 Although extra chairs were brought in for the first Fashion Association of Merchandising and Design (FAMD) meeting on Tuesday, there still weren’t enough seats for the 118 members and 4 e-board members in attendance .

Students had to share seats while covering the steps of Pierce 138 Tuesday as second-year President Ben Touchette talked about the events in the upcoming semester. This fall, FAMD will be sponsoring a design competition for the Clothing Closet, a non-profit organization that provides the Detroit Medical Center with gently used casual clothing for children, teens and parents.

Volunteers for the contest will be required to design a functional children’s outfit complete with a top, bottom and accessory, which can include quilts, hats, gloves and scarves. FAMD will provide volunteers $5 to $10 dollars to help with fabric and supply costs.

Finished garments are due on November 2. The FAMD e-board and faculty members will judge each garment and the winner will be announced during the November 18 charity banquet which is open to friends and family.

Another fall activity FAMD will be participating in is a candle fundraiser with Great Lakes Soybean Candles. The candle sales generate the most profit for the association and each member is required to sell at least four candles. Order forms and money are due October 19, so that the candles will arrive in time for the holidays.

E-board elections were held this past spring and the following positions were filled: Ben Touchette as president, Laura Czupinski as vice president, Claudia Miculici as secretary and Renee Rothgarber as treasurer.

At the next meeting, September 21, members will vote on FAMD chair positions. Open positions include fundraising, social, historian, public relations, and SGA representatives.

Candidates are required to give a small speech at the meeting explaining why they would be a good choice for the position and voting will take place after.

Below are meeting dates and upcoming events for FAMD. Information for the upcoming social, FGI Conference in Chicago and charity banquet will be discussed during upcoming meetings.

Touchette encourages students with a major or minor in Apparel Merchandising and Design to come check out FAMD and see what the organization is all about.