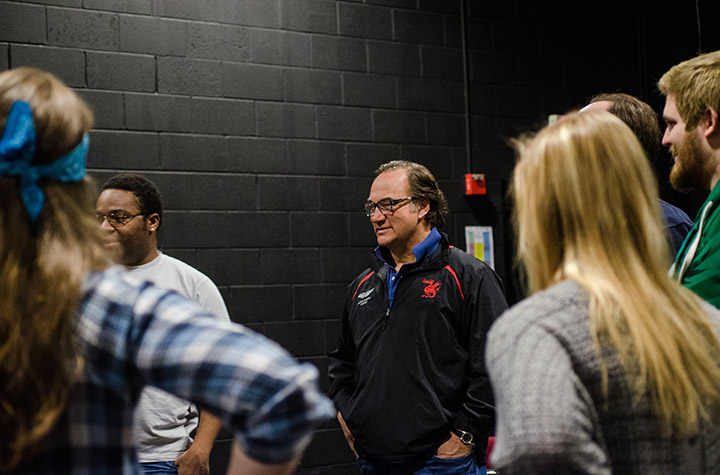 Jim Belushi, star of the hit TV series “According to Jim” on ABC, arrived at Central Michigan University’s Plachta Auditorium Friday to bring the audience to tears with his comedy.

As an actor, director and musician, he does it all.

He was joined by the Board of Comedy to perform improvisations for the audience.

Before the show, senior Eric Kierszkowski said he was looking forward to seeing Jim Belushi because he loved the K-9 movies and thought he was hilarious in “According to Jim.”

“I like to watch ‘According to Jim’ and this should be really funny,” senior Zach Aranyos said. “I also like coming to the different events at CMU.”

Belushi introduced his co-star, welcoming him as “the best partner [he’s] had in [his] career, Larry Joe Campbell.” Campbell played Andy in “According to Jim,” was in “Pacific Rim,” “Hall Pass” and “Wedding Crashers.” He is also a Central Michigan University alumnus.

The stage was set with two chairs and a piano in front of an audience made up of mostly students and adults. The opening act started with Belushi singing, with the Board of Comedy joining. They did a series of short improvisations that took conflicts, relationships, locations, moving and music lines to create dialogue on the spot.

“We’re going to have some fun, that’s all,” Belushi said.

Belushi and Campbell were accompanied by Megan Grano and Josh Funk to make up the Board of Comedy.

All four comedians took turns engaging with the audience to gain topics for the skits. Their improv locations were set in The Cabin bar, in a car as a mother and son and set during the time of Abraham Lincoln’s assassination.

During one skit, Belushi asked for two females that were experienced in yoga. As they showed Belushi their yoga moves, he snuck to grab his phone to snap fake pictures, creating a roar of laughter from the audience.

Campbell and Funk performed blues, rap, country and reggae musicals as the audience yelled out types of music genres that they wanted the skit to be performed in.

“We’re having a ball, we hope you are, too,” Belushi said.

One of the last skits the Board of Comedy performed was a debate. The audience contributed a verb, adjective and noun that created the topic Grano and Funk had to figure out. Two  improv students joined Campbell and Belushi as they acted out the three words.

“I was excited to see Larry Joe Campbell on campus again,” senior Mark Fairbrother said. “His education at CMU equipped him with the tools to really make a splash on stage.”

Senior Ashlyn Hill said she wanted the humor to be a little sharper, but said her and junior Kourtney Wissink laughed during the whole show.

The entire night consisted of constant clapping and laughing from all in attendance. Belushi and the Board of Comedy signed autographs on CD’s, T-shirts and books following the event.