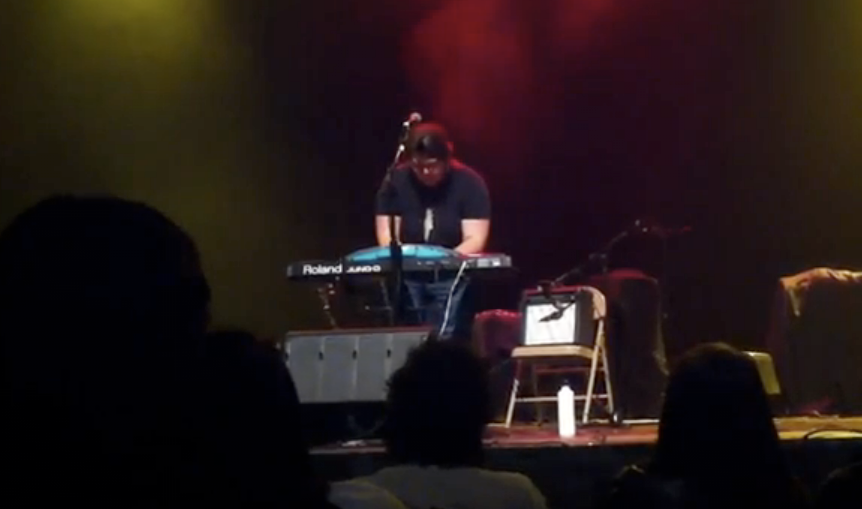 The stage is set. Fog billows and swirls under the red and blue lights. Guitars, keyboards, drums and countless cords litter the platform. About 150 audience members of all ages chatter excitedly from their seats. Suddenly, the house lights go out and a watermelon-sized disco ball starts to spin, casting a rainbow of light around Central Michigan University’s Plachta Auditorium. The crowd starts to cheer.

The emcee was “The Set List” host Rick Westover. This was Westover’s first experience planning an event. If he was experiencing nerves, he didn’t show it. He confidently approached the microphone and opened the concert at about 7:30 p.m.

The singer-songwriter festival opened with a solo act. Ann Arbor based Nathan K came out with long, curly hair, a green sweater, a yellow cap and big glasses. He specialized in haunting riffs on his acoustic guitar and a steady, thumping beat. He recorded his background sounds right on stage with a tom tom drum and a tambourine using a bass drum mallet.

His scratchy voice had a sad undertone, but his falsetto was impressive because of how low his natural voice was. His songs were largely pessimistic. The highlight of his performance was a folk-tinged version of Eminem’s “Lose Yourself.” The sign language interpreter’s hands were a blur.

After Nathan K’s performance, there was a 10-minute break to reset the stage. Most of the audience exited the auditorium to check out the merchandise in the Plachta lobby.

“I saw this event advertised on poster in Anspach Hall,” attendee Liz Brass said. “I really like this kind of music, and I wanted to see what Michigan has to offer.”

Jes Kramer was next to perform. The keyboardist, guitarist and singer hails from Grand Rapids. She came out in a black t-shirt, white tennis shoes and a low ponytail. Her unique voice and fast fingers made for a crowd-pleasing performance; she even bobbed with the beat as she played her keyboard.

Her song “Something,” about wanting someone to like you back, displayed heartbreakingly true lyrics and a beautiful selection of notes. Kramer was largely peppy and hopeful, a sharp contrast to Nathan K.

Joe Hertler and the Rainbow Seekers took the stage next. Hertler used to head a solo act, but recently he fused with CMU student band Jetpack On! The three instrumentalists were suspender-clad, and their drummer looked straight out of the 50s – in a powder blue suit and dark sunglasses.

The bass player was the stereotypical rock’n’roll drummer from the 70s, with bare feet and pants so tight they looked like a second layer of skin. Hertler donned an American flag, which he tied around his neck like a cape. When he broke into song, a general swoon swept amongst the ladies in the audience, who placed their hands over their fluttering hearts. His voice was breathy, soulful and passionate, and he had spectacular pitch. He also played the acoustic guitar and harmonica.

None of the band members stayed still, and neither did the audience for that matter. A couple in the crowd with their fingers laced together tapped the band’s cadences out on each other’s knuckles. Their best-received song was “Best Friend,” their newest number. Hertler invited the audience to put their arms around each other – “But not in a sexual way.”

“I haven’t heard of any of these bands before tonight, and I’m so impressed!” attendee Kayla Dennis said.

The last two bands were both comprised of adults. Drunken Barn Dance squeezed their six members onto the stage. They were dressed casually with business accents, like blazers. The lead singer’s voice was a twangy tenor, and the performance can best be described as visual and aural anarchy.

The band members were flying all over the stage – it was a miracle their legs stayed free from the tangle of cords. The crowd clapped incessantly along with the frenzied beats. Their only slow number of the night was “Low, Probably,” a song about the chase in relationships.

They ended with the statement “So, where’s the after party?”

The final band to take the stage seemed to be the most awaited. When the three-member group Breath Owl Breathe took the stage, the crowd cheered loudly despite the fact that it was after 11 p.m. – the time the concert was supposed to end.

The band performed their songs in the form of storytelling. They also used costumes like a knight facemask and a winter hat shaped like a wolf head. The band was very unorthodox, wearing sweats and kicking around their instruments. At one point, the female member impressively played a cello, tambourine, keyboard and tom drum all in one song. For a song about a dragon and a princess being pen pals, the group transformed the auditorium into a cave and invited the crowd to help them with the sound effects of the song, like clapping, snapping their fingers and whistling.

The event ended over an hour after it was supposed to, but very few people got up to leave before the house lights came on again. The audience’s faces were tired but happy as everyone shuffled out of Plachta.