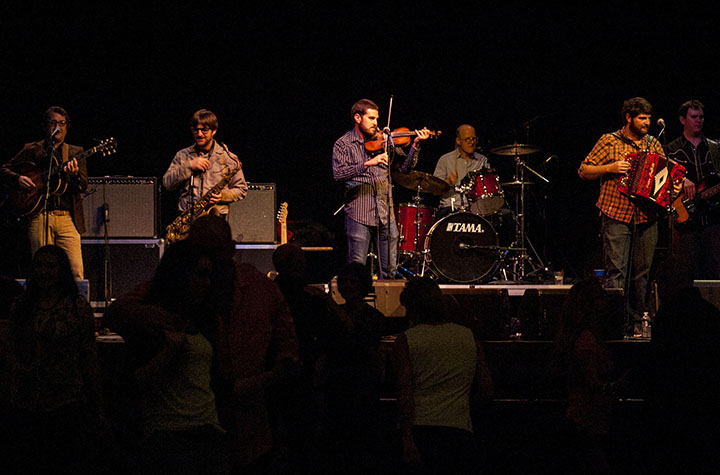 Cajun and zydeco music roared from Finch Fieldhouse Saturday as people joined to celebrate the 23rd annual Night of Louisiana, despite the frigid temperatures whirling outside.

Globe lights hung from the center of the dance floor, cascading over the tables filled with attendants eating Cajun food and conversing with those around them.

“This is like a block party for people,” said Bob Ebner, director of University Events. “People bring four, five, six, ten, all gathering to come to this. Some people have been coming for years.”

In 1989, Ebner went to New Orleans, attended Mardi Gras and that experience sparked the idea to bring the culture of Louisiana back to Central Michigan. University Events and CMU Public Radio united to present the Night of Louisiana, a place where people from the community could come to get a splice of what Ebner found so enjoyable.

The event had always been scheduled for the last Saturday in January so that it could be recorded and broadcasted on Fat Tuesday.

“We stopped taping it a few years ago. It’s a shame it’s not being documented anymore, but at least I’ll remember it here,” Public Broadcasting Director of Radio John Sheffler said pointing to his head.

Night of Louisiana is more than just an event for those who attend, it is a night where they can let loose and have fun on the dance floor.

“It’s like a big celebration,” Ebner said. “You can’t help but tap your toe.”

As many people sat watching couples on the dance floor including an alligator king and his golden queen hop to the beat of The Revelers and Jeffery Broussard & The Creole Cowboys.

Jim Scott, Central Michigan business information systems professor, wearing a green furry alligator costume with a crown came to the event previously and saw someone dressed in a themed costume. He knew he had to have an outfit for the next Night of Louisiana.

“I was looking for a costume and this one just jumped at me,” Scott said.

After he found the alligator suit on Amazon, he had to then orchestrate a corresponding outfit.

“He picked out everything,” Diane Majkowski Piontkowski said. “He told me I was going to wear a gold dress and got me the crow and [Mardi Gras] mask.”

For the other attendees, this was the first Night of Louisiana they had been to.

“It’s a very unique and different crowd. It’s no Wayside, definitely no twerking,” Dartt’s date, Jake Arns, said laughing as he looked around at the families. “I don’t go to school [at Central Michigan], but I’m a townie and this is a yearly tradition in Mount Pleasant. It’s one of the things I wanted to knock off my list.”

Night of Louisiana is an event that people from the community look forward to annually, a time where they can immerse themselves in a taste of the South for a night.