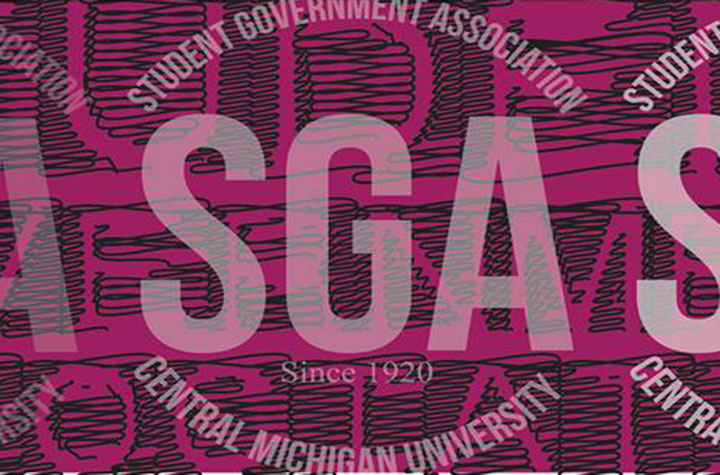 A line curled out the door filing students into the Student Government Association presidential and vice presidential debate Monday, as four students discussed their platforms for the election. With a full room, Marie Reimers and Maggie Blackmer sat at one table, while their opposition, Chuck Mahone and Mariah Urueta sat at another, ready to tell the audience what they will accomplish if elected.

With a warm round of applause, they dove into the debate, each given two minutes to answer questions with a 30-second rebuttal, if desired. After the questions had been answered, they would be asked questions from the audience via Twitter.

RSOs, students, and money became prime topics for candidates throughout the debate, each showcasing how they would communicate and help the student body grow in the next year.

During her term as SGA president, Reimers said she has listened to student voices about food allergies in residence halls, extending in-state tuition for out of state fifth-year seniors and a prayer room in the library.

“[Being involved with RSOs] has allowed me to get feedback and hear student ideas,” Reimers said.

Reimers said the changes she has made during her term as president have all come from concerns students had on campus. Being open to communication with the student body helps them positively, so that they have a voice at Central.

Striving for RSO and SGA communication was one of Mahone’s main platforms for election. Although there is some communication between RSOs, the smaller organizations frequently feel that they are being swept under the rug and do not know how to become thriving organizations.

“We want to make face-to-face contact with RSOs on campus. It’s not OK to see us only when we want your vote,” Mahone said. “If I was president, students would come to me, I would connect with administration and strive to not only create new relationships, but foster the ones we have and make more.”

Reimers rebutted Mahone’s statement, making the point that communication with the administration does not simply happen when someone becomes president, but should be something that is happening before being elected to president.

“I’m in very close relations with President Ross,” Reimers said. “We meet for dinner at his house every month.”

She also said she has close relationships with Sherry Knight of University Communications and others at Central Michigan University. Knowing who contact in order to get particular thing done is essential to the job, she said.

“As the house leader [of SGA], I am in constant communication with RSO leaders,” Urueta said.

Communication, a main topic throughout the debate, benefits not only the members, but the student body in order to create successful relationships within SGA, with RSOs and the university. Urueta said that an increase in communication would also increase efficiency. She mentioned a disconnect because of cliques within SGA that could be overcome.

Blackmer agreed that communication should be present and she would like to keep committee meetings the hour before the SGA meeting.

Mahone and Urueta voiced doubts about Blackmer and having the experience necessary to fulfill her potential role as vice president. Blackmer, a sophomore, has various positions since she has been involved in SGA,  spending two years in leadership positions.

One of Reimers and Blackmer’s platforms is increasing the Campus Programming Fund.

“It’s cut vital programming that we are no longer able to put on,” Reimers said. “[The Campus Programming Fund] would lower costs for alternative breaks, lower greek life dues, increase the amount of concerts we put on. Only positive would come from this.”

Mahone and Urueta said they intend to create transparency within SGA and help student organizations get noticed, grow and be productive within the university. They recognize that first-year student organization SGA representatives are not fluent in the jargon used during meetings. Since this can be frustrating, they intend on making the meetings and terms easy to understand for newcomers.

Reimers said that she has the experience and momentum to make the next year successful because of the changes she has made this year and the ones she is currently working towards.

If Mahone and Urueta were to win the election, they said they would like to help RSOs in any way they can.

“We would like to put RSOs in the spotlight,” Mahone said.

In this spotlight, the featured RSOs could tell others about what they do, have a slideshow on monitors throughout Central Michigan University, and give exposure to organizations that otherwise are not well-known.

Reimers said an RSO program is currently in place within the Student Activities and Involvement Center. “RSO of the Month” highlights an organization through video, as well as a program that helps RSOs communicate with each other. She said she has been working with SAI to get students involved in programming for student organizations as well.

“The fact that [a RSO program] is already there is great,” Mahone said. “I want to make it so RSOs know, because I wasn’t aware.”

Being the student body president is more than just the required 15 hours of work. Reimers said reaching out and being available is important to gain gain relationships within the university.

“Talking to RSOs is important,” Reimers said. “Also, there was a lack of diversity in SGA. There were the same students with the same friends, so I went to various organizations who I thought would make good leaders and asked what SGA could do for them.”

Knowing what the students want helps make the best choices for the university and those attending. All the candidates voiced that they believe interacting with students is essential.

“We want to go to every organization, and there are around 416, and ask what their concerns are,” Mahone said.

Mahone discussed SBAC reform and touched on the reimbursement process of RSOs. Currently, RSOs have to pay for conferences, speakers, and activities they participate in initially and are reimbursed after the event. He said that this process is a hindrance to smaller organizations that cannot afford the up-front costs required. If SBAC could front the money, it could help smaller RSOs grow and establish themselves.

Reimers had concerns about the reform. Giving money to organizations outright could be taken advantage of, when currently they are reimbursed after they see receipts and actual costs.

With a standing ovation, the candidates were applauded for their debate.

“I liked that [Mahone and Urueta] were talking about giving smaller RSOs a voice and fronting the money to help [go to conferences and aid growth],” senior Robert Bidner said.

Bidner is a member of Take Back the Tap and the Student Environment Alliance. He thought the monthly RSO attention was a great way to bring more emphasis to organizations on campus. Senior Caitlin Richards was also impressed by the ideas involving the growth of smaller RSOs, because she has been a member of a RSO with low membership costs for activities has made it difficult to grow.

“We felt like we were washed over,” Richards said. “We couldn’t afford to go to conferences because we couldn’t front the money. Also during the debate, I did think that the worship room in the library is a great idea, even though I don’t support that candidate trope.”

For other audience members, the growth of the candidates was apparent.

“Chuck has always wanted to be president,” Senior Shontasia Bass, a former SGA member said. “His goals are idealistic, realistic, and he does want to make things better. I think they appeal to everyone.”

For the candidates, they were all pleased with the debate.

“I was refreshed by the support,” Urueta said.

Reimers said she thought the debate went smoothly and that she is looking forward to the election.

“It was a great demonstration that we are the right candidates,” Reimers said. “It was transparent who the winner was.”

As the room emptied, Mahone said he was happy with the night and is fired up about helping and representing all students who attend Central Michigan University, whether it be on-campus students or those attending the global campus.

“It’s been my goal for awhile to represent every student and create a positive change for all,” Mahone said. “I hope the audience saw which card they aligned best with tonight.”