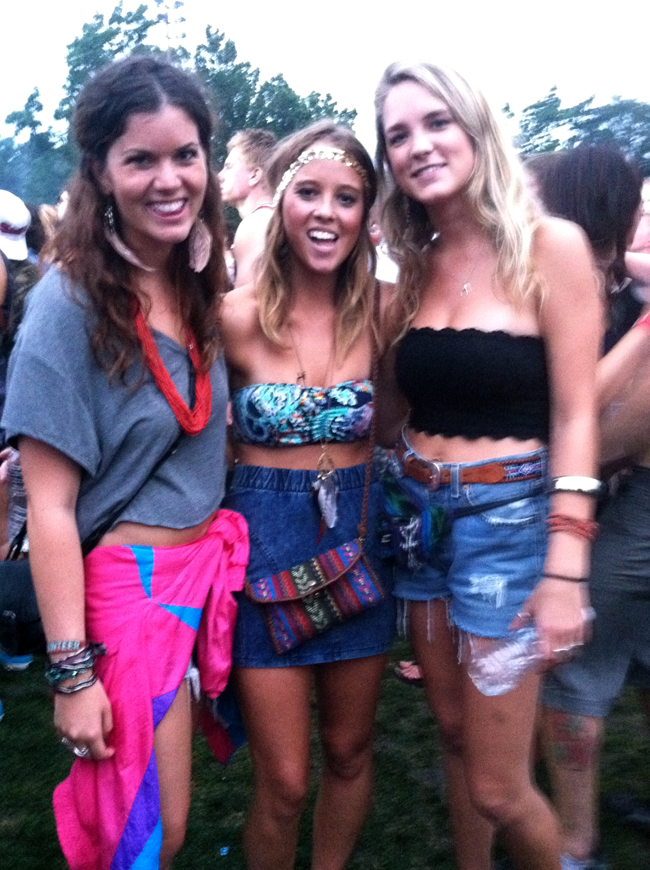 When remembering the women of the early and mid 1990s, we think of acid washed jeans, neon colors, leggings, oversized sweatshirts and endless amounts of denim. Many of these styles are no longer worn on a typical day, but at music festivals such as Electric Forest, Lollapalooza and North Coast, women are bringing back the odd fashions of the 90s.

Over Labor Day weekend from Sept. 2 to the 4, thousands of people swarmed the streets and trains of Chicago to attend the North Coast Music Festival in Union Park. Techno, dubstep, and the headlining artists such as Bassnectar, Zeds Dead, David Guetta and Wiz Khalifa played throughout the weekend.

From the first moment of entering the gates to taking the subway home, it was as if the days of the 1990s were being relived.

Bright neon colors, long floral dresses, crop tops, high wasted shorts, feathers and bandanas covered the women of North Coast. Many of them were decorated with massive amounts of glitter and brightly colored body paint. One of the most frequently seen pieces of clothing were small bustier tops in all colors and patterns. Windbreakers, long hippy dresses and neon snap backs were also very popular. Glow sticks and interesting light up accessories were also seen.

Some of the wilder styles seen at North Coast were big bright tutus and high furry boots. Many girls wore animal hats and mascot costumes were also popular.

“I can’t really say exactly what inspired me to wear what I did to North Coast, but my friends definitely influence my fashion a lot, as well as just reading magazines,” said Trubshaw,  “I have gone to North Coast twice now and Lollapalooza for three years. I just love everything about festivals. The people, the music, just the overall atmosphere is the best.”

When asked why girls dress the way they do at the festivals, Trubshaw said because it’s a place where you can truly express fashion and no one judges you for it.

“I kind of feel like festivals are free for alls, and you can do what ever you want! That’s why I love them! For clothes I wore shorts from Urban, the belt was my mom’s from high school and the bandeau was from Francesca’s,”

“It was really hard to sleep in an apartment with no AC and almost 20 other kids, but it was so much fun in the concerts I ended up not caring about it,” said. Morey.

She has also attended Electric Forest and Detroit Electric Music Festival both during the summer.

“Overall it was a really amazing, crazy time and I would definitely do it next summer,”

North Coast Music Festival tickets for 2012 can be purchased online at http://www.northcoastfestival.com/ . There are also videos and photos of all three days.