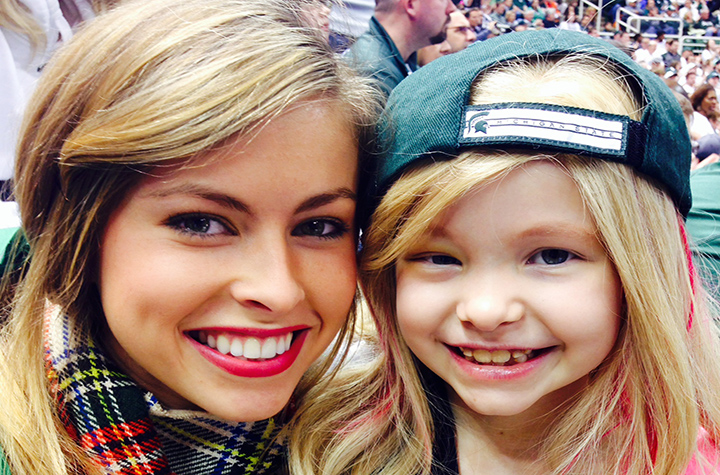 It has been one month since Michigan State’s eight-year-old princess, Lacey Holsworth, passed away from cancer. Lacey was well-known for her special relationship with her “big brother,” Adreian Payne, basketball player for the Michigan State University Spartans. However, what many do not know is that Lacey also has a “big sister,” who is a student at Central Michigan University.

Dignified, chatty, selfless and optimistic are just a few of the several characteristics that Lacey’s big sister, Betsie Hundt, uses to describe Lacey. Despite Betsie’s ongoing battle with depression, it is obvious that these characteristics also  illustrate Betsie.

Lacey came into Betsie’s life during one of the darkest times she has faced since she was first diagnosed with depression. They met in November 2013 at Lacey’s eighth birthday party at Betsie’s family-owned bakery in downtown Dewitt, Mich. called Sweetie-licious. Similar to most girls at the age of eight, Lacey loved to play with baby dolls, which is why Betsie gave Lacey the most real life baby doll for her birthday. Although they had just met each other, Lacey already decided that she would name the doll “Baby Betsie.”

The girls played with fairies and dolls, painted nails, ate ice cream and baked when they had a chance. After a few play dates, Lacey realized that she had four brothers, including Adreian but what she was really missing was a big sister.

Betsie did not fall short of playing the big sister role. She had connections with Zeta Tau Alpha, a sorority on Central Michigan’s campus and within the sorority, new and old members connect, creating a bond of sisterhood. Within the pairings, the older member is called the “big” and the new member is called the “little.” When Lacey decided she wanted Betsie to be her big sister, she immediately started calling her “biggie.”

There were a few times when Lacey had the best of both worlds. She had the opportunity to hang out with both her big brother, Adreian, and her big sister at the same time. Lacey once invited Betsie to the Michigan State basketball game with her to watch Adreian play. Betsie knew this was a special moment in their friendship because Lacey never invited anyone outside her family members to go with her to a game. After the game ended, Lacey and Betsie were allowed back into the Spartan’s locker room where they visited Adreian.

Although Lacey loved being called a princess, being in front of the cameras and loved the attention from her Spartan family, she still remained the most selfless person in Betsie’s eyes. Betsie recalls the time when she was lying in bed with Lacey when she did not feel well. The room was pitch dark and she thought Lacey was sleeping. Suddenly Lacey wrapped her arms around Betsie, opened her eyes and told her, “If you are bored we can go play babies or dolls. The light just hurts my eyes, but we can do whatever you want to do.” Betsie was speechless at the fact that Lacey was recovering from a recent seizure but was unconcerned about her well being and more concerned about making sure Betsie was not bored.

There are a numerous amounts of pictures and videos that went viral of Lacey. These made her look like royalty and few show her vulnerable. Lacey was known to hide whenever she was not feeling well because she had too much dignity to show that she was hurting. The bond between Lacey and Betsie strengthened the most when Lacey would allow Betsie to help her when she needed it. Buffalo Wild Wings held a fundraiser for Lacey in March and as they sat at the table, Lacey did not feel well. Betsie rubbed her back, asked her what she could do to help and then set Lacey on her lap. These little gestures when she let Betsie help her are some of the favorite memories that Betsie will hold onto forever.

Betsie made a point to go home and visit Lacey at least once a week, with only one exception when Lacey was busy following the Spartans around. The weekend of April 4, Lacey was in Dallas for Adreian’s slam-dunk contest and she was expected to return back home on Friday to have a sleepover, watch fairy movies and eat cheesy popcorn with Betsie. Her flight was unfortunately delayed and she did not make it home until Saturday. When she did arrive home, Lacey was exhausted she slept the rest of the weekend. Betsie went to visit her on Monday with a fairy movie and a Barbie. She promised Lacey that once she was feeling better they would play fairies together. She smiled big as Betsie snuggled her tight, rubbed her baby soft skin, giving her a lot of kisses. This was the last conversation that the two shared.

Lacey and her immediate family all wear matching blue, yellow and red legacy bracelets. The bracelets started off as one long string, and then it was cut into smaller pieces to fit around the family member’s wrists. Within the family, the bracelets symbolize that “Even when we are apart, we are still tied together.” Betsie revealed her piece of the legacy bracelet on her wrist as she explained the story behind it.

Betsie and Lacey only knew each other for a half a year, but their sisterhood will carry on forever. Lacey had an upcoming dance recital that was supposed to be held in May. The song that Lacey picked out for her dance was from her favorite fairy movie that Betsie and her watched together. The dance was going to be dedicated to Lacey’s biggie.

“Now when I see girls complain about getting pimples on their face, I think of how Lacey had visible tumors,” Betsie said. “She knew with certainty that she was still the most beautiful girl in the world and did not fear facing the public.”

Although Betsie is having a hard time grasping the fact that Lacey is gone, she said that from the day she met Lacey, she truly believes that she was touched by an angel. Staying in touch with Lacey’s parents and being at their house puts everything into perspective and has a way of making Betsie feel a little bit better. Although the pain will be around for a while, Betsie can look down at her wrist and realize that even when they are apart, they are still tied together. Betsie and many others who knew Lacey all miss their princess. However, the only thing that is better than being a princess is being an angel.