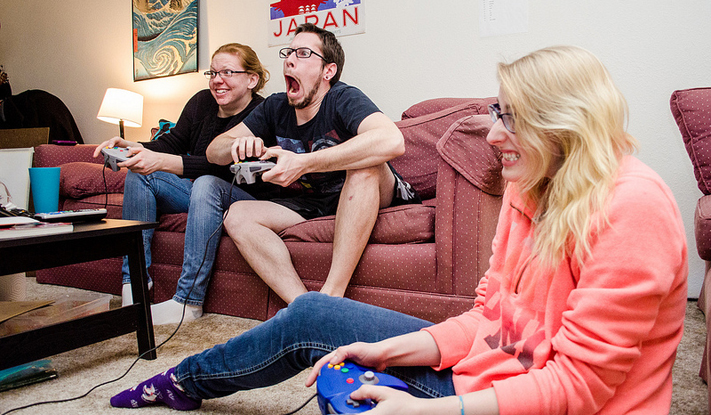 Remember the days when playing video games with someone meant actually hanging out together?

Advancements in technology have evolved the way people interact and communicate. The video game industry has continually taken advantage of said advancements, not only to connect players across the globe but also to create unique interactive experiences that aren’t possible in other entertainment mediums.

In order to examine the evolution of social interaction via gaming, I’m going to reflect upon my own experiences, after all, I grew up alongside this industry and the two of us have never strayed very far from one another.

Let’s start with the 16-bit era of video games, considering these are my very first gaming memories. The Super Nintendo Entertainment System (SNES) and the Sega Genesis were deeply embedded in American culture throughout the early 90s. Back then, playing video games with others meant sitting on the couch next to each other. Classic games such as “Super Mario World,” “The Legend Of Zelda: A Link To The Past,” and “Super Metroid” brought people together to relish in their state-of-the-art visuals and gameplay, while other titles like “Donkey Kong Country” began to introduce the notion of cooperative play (co-op).

I remember spending countless days at my girlfriend’s house playing “Donkey Kong Country” when I was in the second grade. (For the record, she was significantly better at the game than I was.)

However, at that point, most games were designed around a single-player experience and it was not until the 64-bit era when playing video games with others took on a new meaning.

The Nintendo 64 (N64) may have had disappointing sales figures, especially when compared to its direct competition, the Sony Playstation (which outsold the N64 at a ratio of 5:1), but it will always be remembered for one main reason; local multiplayer. The N64 doubled the standard amount of controller inputs on a home console from two to four, allowing up to four friends to play games simultaneously, both cooperatively and competitively.

These additional controller inputs wouldn’t be worth mentioning if Nintendo didn’t have the software to demonstrate their value. Thankfully, the N64 had some of the most beloved multiplayer games ever created, like “GoldenEye 007,” “Mario Party,” “Super Smash Bros.” and “Mario Kart 64.” Chances are you have played at least one of these classics with friends.

Thus, the 64-bit era was deemed as the golden age of couch co-op, an age where friends would have to hang out together if they wanted to play multiplayer games. Even today, in an age filled with online gaming, some people prefer the local multiplayer experience.

My roommate Mike Piotrowski jumps at any opportunity to get a few of us together and fire-up his N64. To him, there is nothing better when it comes to gaming. The Nintendo 64 is special to me because all of the memories that I have playing video games with my dad took place on N64, memories that I will always cherish.

Once the new millennium began, technology had significantly improved and thus allowed for a revolutionary shift in the video game industry. I’m speaking, of course, about the birth of online gaming.

During the era of the Playstation 2 and Xbox, online gaming began to change the way people played games together forever. Friends no longer had to physically be in the same place to play games together.

Game developers began allocating resources to create multiplayer modes that contained servers, lobbies, and voice chat. Players could log onto a server via an ethernet port attached to the console and join lobbies, in order to play competitive games against players around the world with friends as their allies. At the time, it was mind-blowing.

I remember getting “Socom II”  for Christmas when I was 13. It came with the Playstation 2’s add-on peripheral to allow an ethernet connection. I spent the entire Christmas break in our computer room, where my Playstation 2 was set up, making new friends, and barley moving an inch.

Shortly after what I refer to as the Socom days (I played a lot), I got an Xbox and a membership to Xbox Live. I remember wanting an Xbox because my best friend, who was also my neighbor, had one. The two of us were inseparable growing up and we played video games together every day.

Once we both had an Xbox and Xbox Live, we would frequently split up to go to our Xbox’s and play together for hours. Going on Xbox Live became a nightly thing for kids at my middle school and games like “Rainbow Six 3” and “Halo 2” set the foundation for the online multiplayer we enjoy today.

With “Halo 2,” Bungie Software created a lot of the systems that we take for granted today. “Matchmaking” was a behind the scenes process that would place players into online game sessions and considered factors such as rank, skill level, and connection in order to create fair matches. The “Party” system allowed friends to join a private lobby together and then use the matchmaking option to travel from match to match together, seamlessly and with minimal effort.

Throughout the seventh generation of consoles, consisting of the Playstation 3 and Xbox 360, online multiplayer flourished and became part of our pop-culture. The “Call of Duty” franchise is worth noting because of its impressive sales figures and emphasis on online multilayer.

That Game Company created a unique online multiplayer component in their 2012 indie-darling “Journey” that is worth mentioning. In “Journey,” players encounter other players along their trip, one at a time, and this other player remains anonymous until the game is over. There is no chat, no way to communicate besides musical notes acting as Mores code that players can belt out at each other in order to garner attention. This created a truly unique experience to share with another person, and communicating without words made me appreciate this anonymous traveler far more than I would have if I were playing with a friend (which the game prohibits).

From Software, infamous for their incredibly difficult “Souls” series, implemented a clever use of player interaction in “Dark Souls.” In “Dark Souls,” players will find notes littered throughout their game world that were left behind by other players. These notes can be incredibly helpful, such as a warning of an impending trap, but players can’t always trust the notes left behind by others. Some players will intentionally mislead others with notes because, let’s be honest, it’s funny.

Today, memberships to the Playstation Network (PSN) and Xbox Live (XBL) are common among console owners and even necessary to play games online. Party chat is embedded at the hardware level, instead of the software level, allowing friends to chat even when they’re playing different games or not playing games at all.

The Playstation 4 contains a news feed, similar to that of Facebook, regarding all of your friends’ recent activity. Players can even post screenshots and game clips for their friends to see with a push of the share button (something I am guilty of abusing). In fact, the Playstation 4 automatically records the last 15 minutes of gameplay at all times, allowing players to show off those, “did you see that” moments while playing alone. The Xbox One has a similar feature, although it is much more difficult to manage and share.

Social interaction in video games today is diverse and local multiplayer will never become obsolete. There’s something inherently awesome about sitting next to someone and playing a game together. But as online gaming continues to expand in popularity, the ways in which gamers connect with each other expands as well.

The new generation seems to be focusing on social connectivity, implementing asynchronous ways of connecting with friends even when they’re not playing games.

However, in my opinion, the most exciting things about the future of interaction between gamers are the things that nobody has thought of yet. The clever implementations of interconnectivity that game developers will use to further their game design and once again change the way that people interact via gaming.