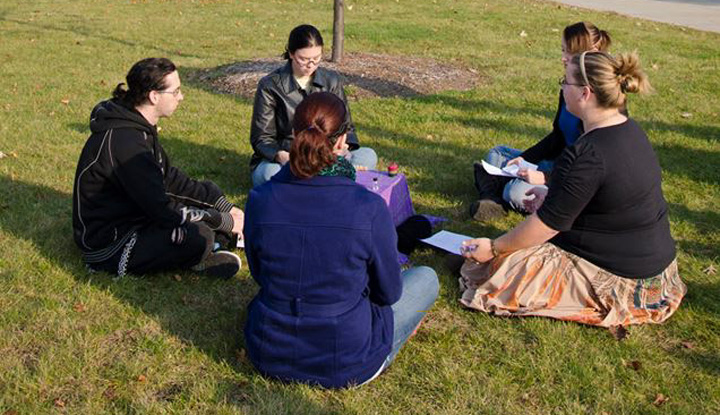 Witches have the connotation of evil, spell-casters like seen in the movie Hocus Pocus. Open Grove Society, a registered student organization that promotes religious diversity on campus, is hosting Witch Week in order to dissolve misconceptions revolving around witches and the practice of witchcraft.

“Some people think witches sit around and eat children,” Mariah Higgins, a member of the organization, said laughing.

Higgins assured those stories are not true. Wild tales such as those have given the Open Grove Society an opportunity to teach others what being a witch is all about.

“I am a witch,” Higgins said. “But the majority of members are not.”

The pressing question is, what constitutes someone being a witch?

“I worship the earth,” Higgins said. “I plant a garden with plants such as herbs and thank the earth for nourishing me.”

Higgins was introduced to witchcraft when she was 14-years-old as she walked through her local library.

She was walking through an aisle with her friend when the shelf started to tip. Higgins instinctively pushed the shelf back, but a book written on witchcraft fell.

Not having a library card, she took the book with her to read.

“It was back when libraries didn’t have the alarms when you took a book,” she said.

Higgins would return the book to the library, but go back later to read it again.

Higgins said that she keeps a Book of Shadows, which holds the recipes and spells she has written. She wrote the Samhain ritual that the Open Grove Society practiced between Anspach and Pearce Hall Monday as part of Witch Week.

“We perform the Samhain ritual in a public place so people can walk by and watch,” Higgins said.

Sitting in the grass was a box with a purple cloth covering it.

“Twice a year the veil between this world and the other is believed to be thin,” Higgins said. “This allows our loved ones to join us once again. The first is in the spring and the second is now.”

The people circled around the area and sat by the element they felt attuned with during the Samhain ritual.

Participants were told to close their eyes and call onto someone who had passed recently. Higgins then passed black yarn around the circle to connect the partakers.

The group circled around the elements, meditating as they connected with the person they called upon until they were told to say goodbye. The group then passed the yarn counter-clockwise, releasing the circle.

Higgins said that she practices rituals similar to the one shared for Witch Week on a regular basis.

“I’m more of a solitary worshiper,” Noe said. “I get in groups for full moons and the Sabbaths, but that’s about it.”

Noe said she doesn’t go by a strict religion, but considers herself as eclectic.

“I practice a little Buddhism, Hinduism, Greek Pantheon,” she said.

According to Open Grove Society’s website, they stand for the “freedom, education, and support of all spiritual students and community members including practitioners of alternative spiritualties.”

One of the original goals of the organization was to create understanding of Wicca and Witchcraft and to sway the popular negative opinions. This goal remains, being the showcase during the week of Halloween.

Witch Week continues through Saturday. Open Grove Society will host a Psychic Fair Friday from 11 a.m. to 6 p.m. where people can experience Tarot readings for $5. Saturday will be a night of dancing with the Day of the Dead Dance starting at 7 p.m. with $2 admission. Both events are at the Veteran’s Memorial Library.