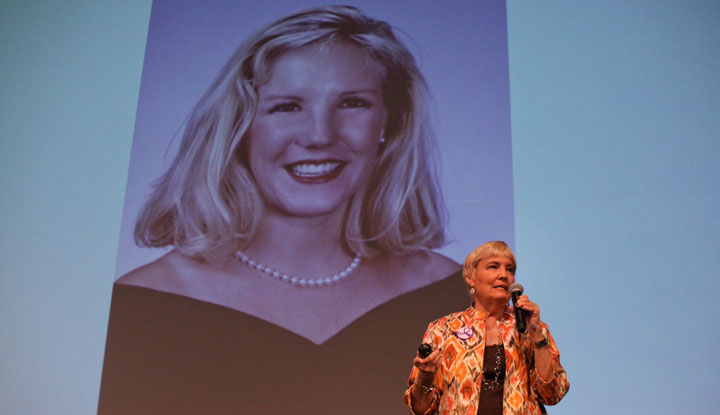 Taking the Plachta Auditorium stage with poise, Andrea Cooper made it clear through her personal story why October’s Domestic Violence Awareness Month is important.

Cooper came to Central Michigan University after the Alpha Chi Omega at Central received a grant they applied for, according to Vice President of Philanthropy Ashley Williams of the sorority.  The Program Board also contributed to the event.

According to statistics Cooper provided, one in four women will be sexually assaulted, while 30 percent contemplate suicide after rape.

Even with the statistics being high, people don’t believe sexual assault or suicide could happen in their family.

“I never dreamed I would lose a daughter to suicide,” Cooper said.

In 1994, Cooper drove her daughter to Baker University in Baldwin City, Kansas, a small university of about 900 students.

“I never would have dreamed that a year and five months later, she would be dead,” Cooper said.

Kristin was excited to embark on a new journey in going to college.

“She was very thrilled to go away to school,” Cooper said. “She chose Baker because she wanted to be important, wanted to know the teachers.”

She became a part of the Alpha Chi Omega sorority at Baker University and began to settle in.  Kristin also met a man and fell in love with him.

“She fell so hard, so fast and I knew her little heart would get broken,” Cooper said.

After about a year of dating, Kristin’s boyfriend broke up with her, leaving her distraught.

On the weekends she would come home after the breakup, keep her door shut as she cried and wrote in her journal.

“When she came home during Christmas break, she was so happy and she told us she was over him,” Cooper said.

In a school so small, Kristin was bound to have an encounter with her former boyfriend, so her parents suggested her take a semester off.

On New Year’s Eve, Cooper and her husband left for a party they were attending.  Kristin told them she would be leaving later to go to a party with her friends.

When Cooper and her husband returned around 2 a.m., they saw that Kristin was home and were relieved that she was “safe and sound” under their roof.

“Kristin was lying in the family room, looking very peaceful,” Cooper said.  “Music was just blasting from the speakers.”

When Cooper approached her daughter she thought she had passed out from drinking too much, saying she was a naïve mother who didn’t think Kristin drank very often.

Kristin’s depression had overcome her, which led to her suicide that night.

During the investigation, police had recovered Kristin’s journal.

Her entries revealed that she had been raped by a close friend, who was not named.

“I was not a snoopy mom,” Cooper said, “I wished I was a snoopy mom because then I would’ve known.”

Cooper had not known about what Kristin was dealing with, but Kristin had told some of her close friends and her boyfriend.

“She got all her nerve to go back to school to tell [her boyfriend at the time] she got raped and he dumped her,” Cooper said.  “I think she could have recovered from the rape if the boyfriend would have stayed with her.”

Kristin had been showing every sign of depression, Cooper said, but since Kristin was away at college, Cooper wasn’t able to observe all the signs first-hand.

During this semester, Kristin’s grade point average dropped to 1.8 and she was skipping classes.

Cooper urged the audience to be good observers and listeners, but not to overwhelm with advice.

“Whatever you do, don’t tell the parents.  If you tell without that person choosing themselves, you are taking that choice away from them,” she said.

Cooper told the audience that her opportunity to tell Kristin’s story has helped her immensely.

“It has been a blessing,” she said.  “It has really helped me heal.”

“She blew my socks off,” Reeves said, “and it was relevant and applicable to us.”

The statistics Cooper showed, said that 50 percent of women college students have experienced sexual aggression from an acquaintance and every two minutes a woman is being raped in the United States.

“Sexual assault is rampid on college campuses,” Cooper said.  “Students are very receptive to hear it.”

Reeves is a member of the Alpha Chi Omega sorority at Central.

“I heard from fellow greeks that this was one of the best events that we’ve had,” Reeves said.  “I felt really touched by how honest and poised she was.”

Cooper contributes her strength to three things: faith, her husband of 46 years and counseling.

Everything Cooper learns, she shares with those in her audience, raising awareness and creating a line of communication.

“This has changed my life so much,” she said. “I’m 50 times smarter since she died.  I’ve learned so much about sexual assault and suicide.”