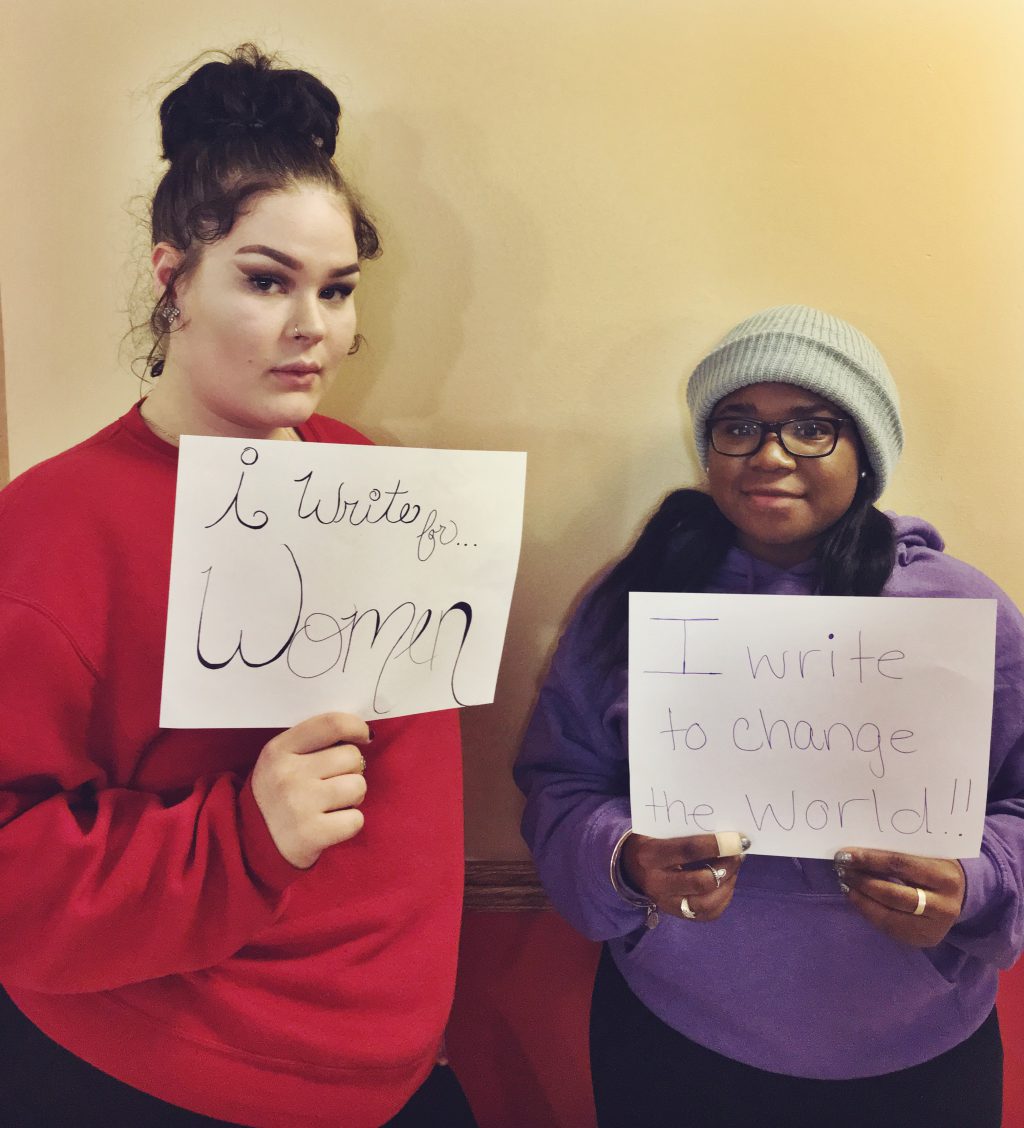 Story and Photo by Jasmine Pope

Justus League is a registered student organization that focuses on promoting a vibrant and authentic hip-hop culture on Central Michigan University’s campus, and encourages artists who want a future in the music industry to share their music with students.

However, a majority of their events are based around local male hip-hop artists, which leaves the women of Justus League shying away from displaying their related skills and talents.

We sat down with Justus League President Ahsha Davis and Social Media Coordinator & Secretary Saceila Gonzalez, revealed hidden talents and the motivations behind them.

Ahsha Davis’ Passion for Poetry
Ahsha Davis is a Detroit native studying broadcasting and cinematic arts and has been an active member in Justus League for approximately two years, holding her position as president of the organization for one year. A full-time student, Davis is also an avid hip-hop dancer and a poet.

While she has been dancing in a variety of disciplines since she was a young girl, Davis has not been able to share her passion for dance within Justus League yet.
However, she has been able to display her performance skills through poetry. Davis began writing poetry in the fifth grade, and her passion only continued to grow throughout high school with Maya Angelou as her primary inspiration. Since then, she has participated in many poetry slams which she said, helped her to develop her writing technique.

Upon arriving at CMU and joining Justus League, she has been given the opportunity to further expand on her poetry.

Davis named many reasons why she continues to write and share her poetry with her community, but her ultimate goal is to impact everyone around her. More recently, Davis has been using her talent as a poet to speak out on issues that concern her and her community.

“The reason I write is to change the world,” Davis said.

Saceila Gonzalez’ Spoken Expression
Saceila Gonzalez, also from Detroit, is a senior studying social work and has been a member of Justus League for two years. Her chosen skill? Spoken word pieces, to which she refers to as a “form of expression.”

“Justus League provides me with a platform to express myself and how I see the world in an artistic way,” Gonzalez said.

Growing up, the poet Shel Silverstein is who Gonzalez cited as her main inspiration.

“Although they’re simple little rhymes, they contain so much,” said Gonzalez. “There could be a whole story told in four lines.”

As she’s gotten older, her inspiration behind her form of expression has shifted.

Admitting to being bullied as a child, Gonzalez said this has only aided in her inspiration behind spoken word. Not having a solid voice for that period of her life made her realize that there’s nothing she can change in the past, but she can carry on the lessons that translates into her poetry today.

The Future for the Women of Justus League
According to Justus League members, the organization is currently in the process of expanding their focus. Although they won’t stop encouraging male artists to share their creativity, they want to branch out to other forms of hip hip engagement such as graffiti, hip-hop dancing, women artists, slam poets and spoken word pieces among other topics.

While that dream hasn’t turned into reality just yet, Gonzalez says that she, along with Davis and the four other women in Justus League, refuse to remain silent.

“I notice a lot of things that are unjust that are still not spoken about,” said Gonzalez. “All I want is to use my voice to create my pieces and speak out on these topics.”