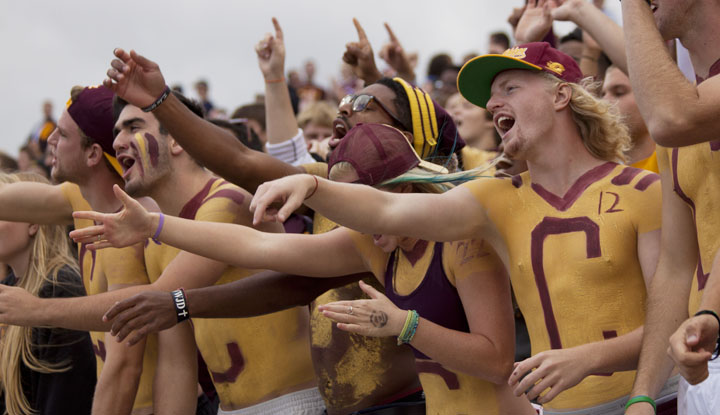 Homecoming is a time for unity, whether it is being celebrated on a high school or college campus. The activities may differ, but the school spirit remains.

With the homecoming game against Northern Illinois University looming, the festivities have begun, getting students excited about being a Chippewa.

Amy Walling, a freshman, has been experiencing a new homecoming environment.

“At my high school we had dress up days, but that’s it,” she said. “I feel like there’s a lot more to get involved with here.”

Walling is participating in activities with Larzelere Hall, whose goal is to defend their title of the Maroon Cup.

The Rock Rally on Friday is one of the events that organizations will compete in.  They will prepare a performance, which is scored and added to their chances of winning.

“I’m a dancer, so the Rock Rally is totally my thing,” Walling said. “Our theme is Lion King and I’m a part of the enemy side.”

The Rock Rally is comparable to a high school pep assembly according to Alexa Snyder, program assistant for the Student Activities and Involvement Center.

“In my high school, they called it Mock Rock,” Snyder said. “Every Friday of homecoming for the last hour or hour and a half, football players and cheerleaders went out on the floor.”

Central’s Rock Rally is different because of their focus on registered student organizations, allowing more students to get involved.

Although Keith Dozier, senior and member of the Grappling Club, will not be competing for the Maroon Cup or Golden Goblet, he acknowledges the resemblance between high school and college homecomings.

“[Central’s homecoming is] not too different,” Dozier said. “The scale is. There’s a lot more students, but the types of things done for homecoming week are similar to high school.”

The 2013 homecoming theme is “Forever Maroon and Gold,” which was chosen to initiate school spirit.

“The goal for this year’s homecoming was to get more participation. We thought that students could relate to maroon and gold,” Snyder said. “Everyone has either bumper stickers or beads or clothes that are CMU colors.”

The homecoming production team put “a little twist” on the requirements for participants involved in the competitions.

Since the theme revolves around school pride, they incorporated the Central Michigan University crest into the competition.

“Sapientia, Virtus, Amicitia” is written on Central Michigan University’s crest, which translated from Latin says “wisdom, virtue, friendship.” Each of these three words need to be incorporated into the competition by participants.

With the 2013 theme being centered on school pride, the Student Activities and Involvement Center have been looking at the history of Central Michigan University.

Snyder revealed an envelope of pictures from previous homecomings, some showing students being crowned king and queen.

The terms “king” and “queen” have since been replaced by Gold Ambassadors.

“I think they changed it to better represent student community as a whole,” Snyder said. “All ambassadors together are represented equally.”

Ambassadors are chosen to represent the university and therefore go through a process to ensure that they will be a good symbol for Central Michigan.

Ambassadors are not chosen as part of a popularity contest, like some high school king and queens.

The participants are required to apply, where their grade point average and involvements on campus are reviewed. They also go through an interview involving a presentation and answering questions.

The ambassadors are weaned to five women and five men, who are that year’s ambassadors.

Based on a few facts about each, students then vote for the Gold Ambassadors, which are revealed at the Rock Rally and announced again at the football game.

Each school, high school or college, has different ways of engaging students in school spirit during homecoming week.

When people congregate to show their pride during homecoming week, at the parade and football game, they show their support for not only a school but for a bond between students, alumni and fans.