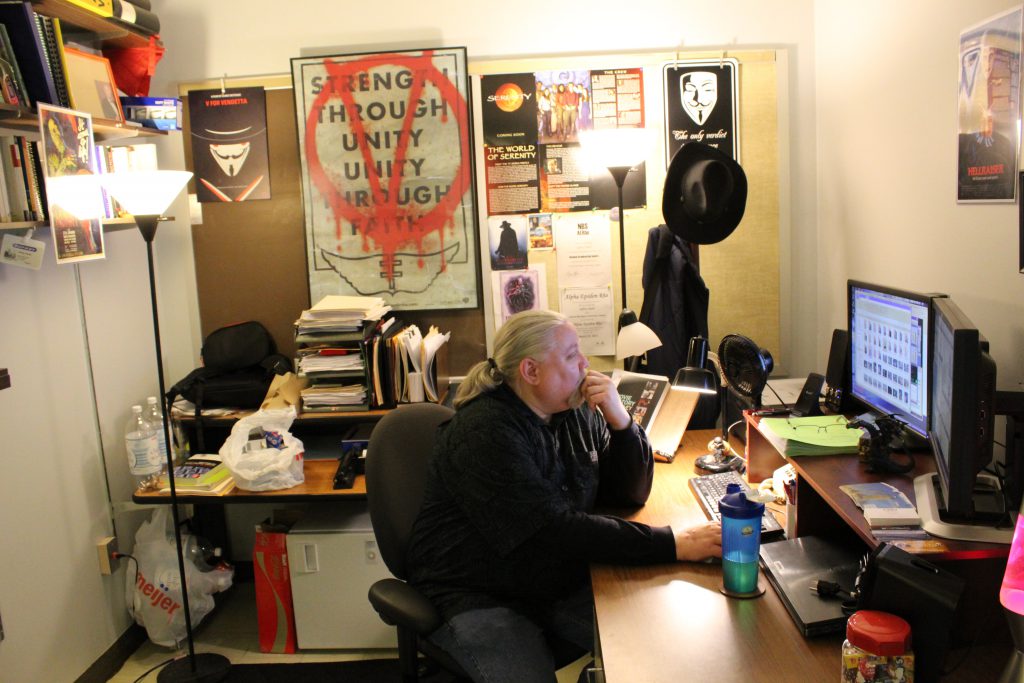 Story and photos by Justin Cooper

For the first time this semester, Central Michigan University students had the opportunity to take a class about Marvel superhero films.

The class, BCA 525K: The Magnificent Media of Marvel, had been requested by students for about three years, and film professor Dr. Jeffrey Smith was approached to teach it because no other film professor knew anything about the topic.

Smith, on the other hand, had been a fan since middle school, collecting Marvel comic books that developed his appreciation of the characters and stories. 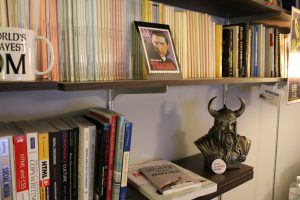 “You’re reading about characters with these extraordinary abilities, things that as a kid you dream about, but they’ve also got incredible problems too,” Smith said. “They’re dealing with day-to-day things like school, and work, and relationships and family.”

Smith’s favorite Marvel character? Spider-Man. The web-slinging hero, Peter Parker, must maintain a super-powered alter ego vilified by the press on top of dealing with life as a nerdy high schooler.

Smith was also drawn in by Marvel’s treatment of social issues in the 1960s and 1970s, like civil rights and the anti-war movement. One of the first openly gay superheroes, Northstar, was a Marvel creation.

The collision of superhero conflicts with more human drama drew him to Marvel comics over any other publisher.

BCA 525K students begin their journey with a showing of the 1944  Captain America serial film, the first time a Marvel character appeared in a theatrical release. Now, it is winding its way to the modern day through the company’s many attempts to put superheroes on film before breaking into the mainstream with the Marvel Cinematic Universe.

The sheer existence of Smith’s class signals a shift in popular perception of comic books, and “geek” culture at large.

The class exists because Marvel has been able to make a multi-billion dollar behemoth out of media that used to be created on the margins of pop culture. Even Dungeons & Dragons, once the apex of all things nerdy, is now the subject of countless popular podcast series.

“Back then, [playing Dungeons & Dragons] was something you kept secret,” Smith said. “You didn’t tell anybody else, and you were very careful about broaching the subject to try and find out if the person you were talking to also played, or if they were going to think you were a colossal dork.”

Reactions to the class so far have been “very positive.”

Smith finds himself teaching a class where about 25 students proposed a field trip with him to see “Captain Marvel”, the latest Marvel film, released earlier this month. About 35 people ended up going with the group to see the movie at Celebration! Cinema.

“I was very flattered that they all wanted to go along and see it as a class,” Smith said. “I thought that was great.”

The class is well-timed, as “Avengers: Endgame,” the next Marvel film and the conclusion to over a decade of interconnected plot lines, is set to be released April 26, three days before the class’ final exam.

“Endgame” is the sequel to “Avengers: Infinity War,” the highest grossing superhero film of all time, and will see several Marvel mainstays leaving the series including Robert Downey Jr.’s Iron Man and Chris Evans’ Captain America.

Smith is approaching the pivotal film with curiosity.

“Before [‘Guardians of the Galaxy’] came out, I would have said that ‘Endgame’ would mark the saturation point, where it all goes downhill from there,” Smith said.

However, since Marvel Studios managed to adapt a relatively obscure comic into the hit film “Guardians of the Galaxy,” he believes there’s no telling what else they’re capable of pulling off.

After this semester, the opportunity to take a class on Marvel films at CMU may not present itself again for several years.

BCA 525K changes every semester, focusing on a different genre of film each time, and it may take three or four years for the class to return to Marvel. In the fall 2019 semester, the class will focus on exploitation films.