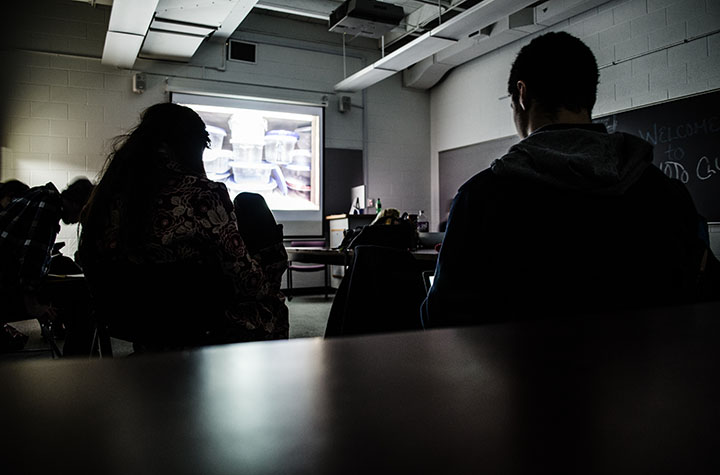 “Welcome to PC squared,” vice president of Photo Club Taryn Wattles said with a smile. “Get it? Photo Club and Poet’s Collective, both are PC.”

With Photo Club based in Wightman Hall and Poet’s Collective members having classes primarily in Anspach Hall, this collaboration, at first glance, might seem unusual. The use of photography as inspiration for writing, however, is not a new idea.

“My idea to collaborate came from E.E. Cummings,” Jake Montalvo, co-president of Poet’s Collective said. “Visual art and what we do are both creating images. We do it with words and they do it with photos.”

Each Photo Club member chose an image they created, which would then be used to inspire a poem written by the members of Poet’s Collective, resulting in ekphrastic poetry.

“Ekphrastic poetry is really just poetry written on the subject of another art form,” Montalvo said. “In class we read about the French movement in the 1900s and how much of its focus was on imagism, which brought forth the connection between the two arts in mind.”

Five poets and four photographers gathered in a circle. As they introduced themselves to the group, the poets instinctively started snapping their fingers, a show of appreciation and praise that commonly follows the reading of a poem.

“Oh yeah, I forgot you did that,” Wattles said as she joined the snapping.

As Burgess projected the first photo on the screen, the poets gazed at the image and hunched over their paper, scribbling feverishly. The photographers observed the poets write, not participating in the ekphrasis poetry right away.

“Having them write about your photo makes you kind of nervous.” Wattles said. “You just sit there twiddling your thumbs, waiting, hoping  they get inspired.”

Each week Photo Club members are given a topic or sentence that must inspire the photo they will share with the group. The word for this meeting was “confinement.”

Junior Paige Vanosdol’s image was a self-portrait of her trapped inside one of the plastic containers stacked within a cupboard.

“I had this idea about being physically confined in something, so I confined myself in a Tupperware container,” Vanosdol said. “I was going to make it like a prison cell but we didn’t have a lot of the same sized containers.”

The poems inspired by the Tupperware image referenced the water spots on the plastic container, entrapment and resulted in one poet naming his poem “A letter to my mother.”

“I love critiques from other people’s point of view,” Vanosdol said. “It was interesting to hear what they had to say, not knowing my point of view and then taking it in a totally different direction.”

Wattles’ image projected her self-portrait, sitting on a bathroom sink with her hands crossed. The reflection showed her hands by her face trying to gain attention, while alumnus Trevor Redford presented his photograph taken in a dark, abandoned Packard Plant garage. The photograph Burgess showed was of a candle that he sprayed with WD-40.

The sound of hands swishing across paper and the rapid scratching of the pens across paper was all that could be heard as Photo Club members joined the poets and began free-writing, inspired by the images.

“I liked the parking garage photo,” senior Riley Nisbet said. “Recently, I’ve been thinking about light as arms and fingers pulling plants up. In this photo, the light doesn’t go to the end of the garage, it isn’t strong enough. It brought out new ideas that I hope I can develop.”

One image can create viciously separate ideas that originated from the same photo. Burgess’ photograph, taken of a candle, inspired the poets to write about the devil, God, fire, nebulas and stars.

“My favorite one to write about was Mike’s,” Montalvo said. “Right away I thought of the corky perspective of the devil.”

Nisbet took the photograph in a different direction.

“I thought it looked kind of like a straw and thought maybe God was sucking the sun up through the straw,” he said.

“I’m glad that we’re expanding to other groups,” Wattles said. “This could be the start of a symbiotic relationship.”