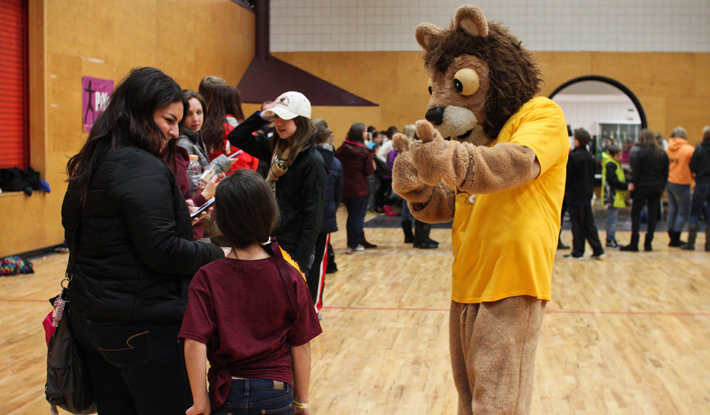 A line of students and their siblings stood in line, watching the participants in front of them climb the rock wall in Finch Fieldhouse Saturday, which was one of the many activities for SIBS Weekend at Central Michigan  University.

“Good Vibrations” by the Beach Boys played in the background, keeping an upbeat, invigorating tempo for those climbing the wall.

Junior Garrett Gahn asked if he could climb the advanced wall. The rocks, scattered, had part of the wall protruding, creating an obstacle that rookies would likely not overcome.

The crowd shifted their gaze to Gahn as he dangled and then gained his momentum to grab a rock above his head. As he found something to put his foot on and gain stabilization, those watching began to clap and cheer him on until he rang the bell at the top.

“I’ve rock climbed  before,” he said after returning to solid ground. “Up there, it’s all arm strength. You have to pull yourself up, not to mention I’m pretty sore.”

This advanced climb was a challenge he had to try, but without the help of his brother, it would have been more difficult.

“He showed me the green one I couldn’t see,” Gahn said.

For Witulski, he was only rooting his big brother on.

“I was just trying to help him make it to the top,” he said.

SIBS Weekend is not only about sibling bonding, but about extended family, too. Twins Miriam and Ian Etienne, both freshman, and their cousin senior Eleanor Etienne brought 10 year-old Ethan Traviss to enjoy the event.

“My favorite thing we’ve done is laser tag,” Miriam said. “We just ran around in the main kitchen in Finch. All the little kids were copying us.”

Traviss also enjoyed both laser tag and the rock wall.

“Laser tag was fun. I got a bunch of random people I didn’t know,” he said. “I’ve been on the rock wall five or six times and every time I made it to the top.”

One of the main events, the carnival that took place in the Student Activities Center, ran into a few problems due to the snowfall. The carnival was scheduled to begin at 2 p.m. with an inflatable castle and obstacle course, along with other activities for participants.

“The company [that was bringing the inflatables] got stuck in snow, so we had to push back the carnival,” said junior Stephanie White, member of the carnival committee. “It will be split in half.”

People could see and touch the animals from Whispering Pines Mobile Zoo at the original carnival time, while later, the inflatables, character artists and other activities would be available.

“I’m impressed on how they gathered themselves and took care of the situation. They didn’t cancel, but extended the carnival, allowing people to get dinner or something,” White said. “I actually think it worked out better.”

Although the snow delayed the arrival of the inflatables, participants weren’t shy to participate in the first part of the carnival and touch the animals.

A line of children and their siblings stood looking at the tables containing a Morelet’s Crocodile, African Pygmy Hedgehog, Legless Lizard and other animals.

The child in front of him shied away, not wanting to let the furry legs graze his hand.

When the second half of the carnival began, children stood in line to go down the inflatable slide, have caricatures drawn and get balloon animals.

“The turnout of students and siblings was very strong this year,” Marketing and Sponsorship Coordinator Rachel Quinn said. “We had many events and it was awesome to see sibs take over campus.”