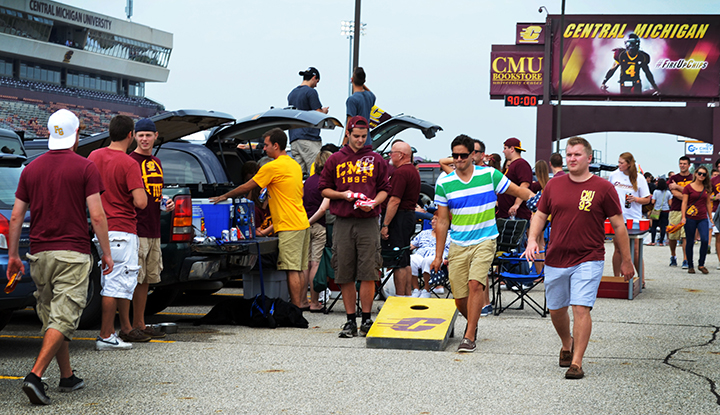 A sea of maroon and gold, blaring music and the smell of barbeque only equate to one thing: a Central Michigan tailgating party.

On Sept. 7, many freshmen and first-time tailgate attendees didn’t exactly know what to expect from the first tailgating event of the season.

“I expected to get lost in the crowd, but (tailgating) was lovely,” freshman Alex Keefer said.

Tailgating can often consist of middle-aged and elderly people sitting around the bed of a truck, watching a pregame show.

A Central tailgate is the exact opposite. The parking lot, filled with hundreds of people of all ages, is a place where dancing and laughing is encouraged, all in support of the Chippewas.

“My first tailgating experience was really fun. I had a good time celebrating team spirit along with having good food,” freshman Luke Cunningham said.

Fans crowded the aisles dressed in maroon and gold, with temporary mascot tattoos on their faces and beads hanging from their necks.

“I think the students showed a lot of school spirit and it made me proud to be a Chippewa,” freshman Jordan Nellenbach said.

“Fire up, Chips!” could be heard what seemed like every 1o seconds and strangers celebrated the home game together.

All of the pre-game festivities led up to the real event: the Chippewas facing off against the New Hampshire Wildcats in their first home game. As kickoff approached, fans headed toward the gates to find the perfect place in the bleachers to watch the game.

The parking lot cleared, leaving the lively area a remnant of what it was just a few minutes earlier. “Let’s go Chips,” was spoken in unison from inside the stadium, as the fans cheered their team to victory.