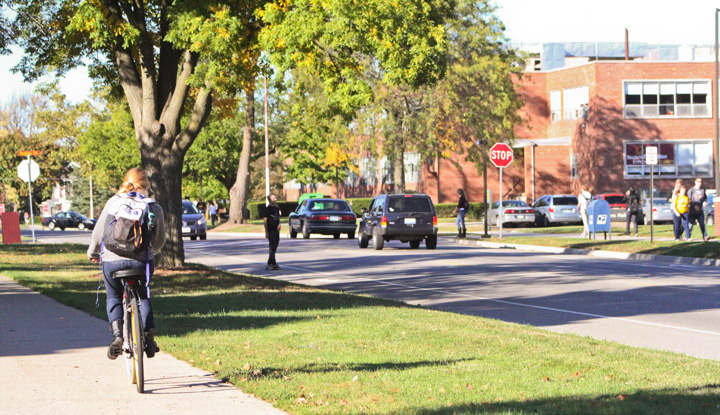 Students travel to Central Michigan University’s campus in a variety of ways.

Some people choose their form of transportation on the basis of health while others take into account the environment and some act out of convenience.

Samantha Bramer, freshman, sat at the bus benches outside the Music Building waiting for the bus to take her home.

“Riding the bus is easier; it’s faster,” she said.

“All of my roommates ride the bus,” Bramer said. “Parking permits are so expensive.”

Ryan Fuller, junior, agreed that purchasing a parking permit is a chunk of change as he locked his bicycle to the bike rack outside the Park Library.

“I will probably ride my bike a couple more weeks until the snowflakes start falling,” Fuller said. “I might have to buckle down and pay for a parking pass, though.”

Wearing a hat to keep his ears warm on his journey to campus, Fuller said his apartment complex is not too far from campus.

Being in a hurry to finish some assignments, he explained that riding his bike is a quick and convenient choice of transportation.

With temperatures dropping as the seasons start to change, the ways of getting to and from school change.

Audra Flores, junior, explained the variety of ways she gets to campus for her classes.

“I do occasionally drive to campus,” she said. “Taking the bus saves money on gas, though. Honestly, riding the bus is convenient. The fact that it picks me up at my apartment is nice,” Flores said.

She has also walked to campus from her apartment at Copper Beech.

“I have walked, but it sucks,” she said. “I prefer the bus or riding my bike.”

When the weather was warmer, she rode her bike three or four times a week. Since it has gotten colder, she rides the bus, which shuttles her from her apartment to campus.

“[The bus] actually does get busy sometimes, but I haven’t had to stand,” Flores said as she approached the bus that would take her home.