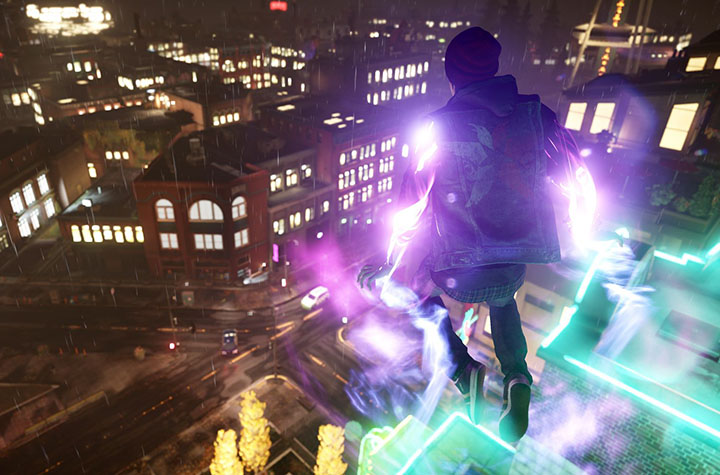 Since its announcement at last year’s Playstation 4 unveiling, “inFAMOUS: Second Son” has been under much of the next-gen spotlight. Viewed as perhaps the first major exclusive for the Playstation 4, “Second Son” provides validation for Sony’s early adopters by providing unparalleled visuals, silky-smooth gameplay and presentation that is leagues above anything Sucker Punch has previously created. It’s too bad that uninspired mission design and a lack of enemy variety hold “Second Son” back from being truly amazing.

“inFAMOUS: Second Son” is an open-world superhero action game that takes place in developer Sucker Punch’s home town of Seattle. Like its predecessors, the backbone of “Second Son” is morality. Embedded throughout every facet of the game is choice.

Players may choose the role of hero or villain and watch the game’s narrative and city evolve and react to the choices that are made. It’s disappointing, however, that besides drastically different endings, much of “Second Son” plays out the same way, regardless of the path chosen.

People claiming that this new generation’s visuals barely surpass that of the Xbox 360 and Playstation 3 clearly have not seen “Second Son”. It didn’t take long for me to stare in awe of just how amazing the game looks. The lighting in particular is unparalleled. Seeing the sun’s reflection glaze across puddles of water as Delsin, “Second Son’s” protagonist, unleashes bolts of purple neon from his fingertips is truly something to behold. The city of Seattle looks fantastic in its native 1080p resolution and textures are crisp whether Delsin is standing right next to them or peering at them from atop the Space Needle, some hundreds of yards away.

Alongside “Second Son’s” fantastic visuals are high production values, something Sucker Punch has lacked in the past. Troy Baker continues to add to his already impressive resume (cc. “The Last Of Us”, “Bioshock: Infinite”) by bringing the character of Delsin Rowe to life. His voice acting is fantastic throughout and the facial capture technology used for cut scenes is the greatest I’ve seen since “L.A. Noire”.

The narrative relies heavily on the relationship between Delsin and his brother Reggie, voiced by Travis Willingham, who happens to be Baker’s best friend. Their chemistry is undeniable and the back and forth banter between the two of them provides much the humor that Sucker Punch is known for.

Speaking of humor, Delsin does a great job of providing comments and observations throughout, keeping the tone light and the emphasis on fun. After all, that’s what the “inFAMOUS” games are all about.

When the story begins, Delsin is no superhero, just a rebellious punk with a beanie and a knack for graffiti. Things escalate quickly and due to circumstances I won’t spoil here, Delsin realizes he’s a conduit, Sucker Punch’s name for people with powers. A powerful villain is introduced in Brooke Augustine, leader of the Department of Unified Protection, and the stage is set for Delsin and his brother to travel to Seattle in order to save the people of their tribe.

Seattle has been seized by the Department of Unified Protection, a military-controlled army that imprisons all conduits and labels any not behind bars as bioterrorists. Humans fear conduits and it is completely up to the player to either reenforce that fear or completely eradicate it.

Seattle acts as a playground for Delsin and the four varied power sets that he acquires throughout the narrative are each unique and exciting. Unlike other conduits who only contain a single ability, Delsin can absorb the powers of others by touching their hand, turning him into a power sponge that is constantly becoming more diverse and powerful.

Smoke feels brutal and personal while neon provides precise, long-range attacks. The other powers, which I won’t spoil for you here, are equally as fun and the game benefits from the additional variety in powers that the previous, electricity-powered “inFAMOUS” games lacked.

Switching powers is as simple as absorbing a power source in the environment. Want smoke? Find a smoke stack on a nearby rooftop. Want neon? Find a sign hanging in a nearby storefront. The ability to freely switch between powers provides “Second Son” with a layer of strategy that was previously absent from the franchise and the result is a feeling of empowerment that few games can match.

The blending of combat and traversal is where the game really shines and watching a skilled player dispatch a group of DUP forces can become a true feast for the eyes. Each power contains a unique traversal move that significantly changes the flow of the game, and although I found myself usually sticking with neon, due to the ability to sprint straight up walls, every power is worth your time.

The supporting cast is not nearly as fleshed out as Delsin or Reggie and after a few missions involving each of them they are mostly absent from the remainder of the narrative, making way for the next one. This is disappointing because I particularly enjoyed Delsin’s interactions with the neon-powered Fetch and wish that she had more of a presence in the remainder of the game.

Thankfully, Seattle is ripe with secondary side missions and ample opportunity to gain karma toward whichever path you choose, although most of them can be completed very quickly. The graffiti activity is a particular highlight and whoever is responsible for coming up with the brilliant use of the Playstation 4’s controller, acting as a spray can, should be commended.

Superhero games are about enjoying your powers and having a good time and in this regard, “Second Son” succeeds. The city is dense and beautiful, the powers are varied and the movement is empowering. As an open-world game, “Second Son” is familiar. The repetitive and predictable mission structure as well as the lack of enemy variety tarnish an otherwise intoxicating experience. Regardless, if you own a Playstation 4, you owe it to yourself to buy this game. For now, “inFAMOUS: Second Son” represents the pinnacle of next-gen.

*Justin spent around 25 hours playing through both the good and evil sides of the campaign as well as obtaining the game’s platinum trophy.