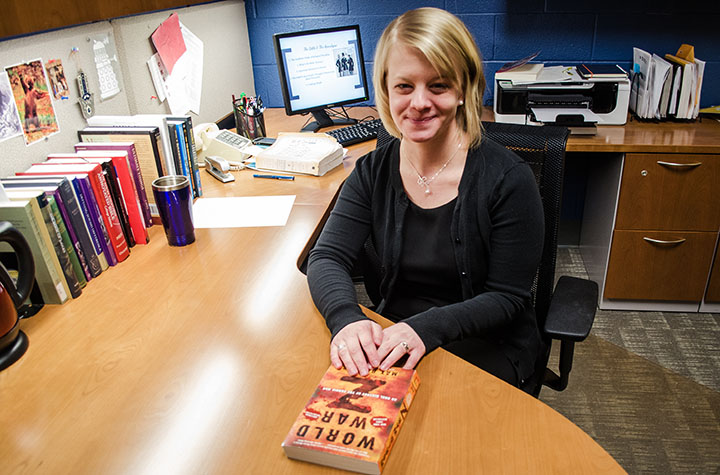 Zombies are everywhere. When walking through the film and book aisles of a store, it is clear that zombies are the new craze, but many do not know that apocalyptic literature goes as far back as biblical text.

The new course, REL 397D “From Revelation to the Walking Dead – Apocalypse Then and Now,” taught by Kelly Murphy, allows students to explore apocalyptic texts. These range from those found in the Bible to modern apocalypses that focus on brain-eating zombies such as “The Walking Dead,” “World War Z,” and “Warm Bodies.”

“In this class, we will be looking at biblical texts, but also more contemporary versions of zombies to keep the students interested,” Murphy said.

Being a first-year professor at Central Michigan University, Murphy was asked to create a course that would attract students.

“This isn’t an original idea,” she said. “There are courses on zombies all over the U.S., but I thought it might be interesting to bring it to CMU.”

Senior Emily Keith had been looking for a fun class to take ever since her friend, who studies in Southern California, started bragging about a “Star Wars” course that was offered at his school. She didn’t think there would be a class that interesting at Central Michigan until she spotted a flyer attached to a bulletin board.

“I was leaving psychology and saw a obscure little poster,” Keith said. “Right away I was interested, even though it had nothing to do with my major.”

Although the class revolves around the apocalypse, it is a religion course requiring reading from ancient Jewish and Christian biblical texts that can be hard to consume and understand.

“I didn’t know what to expect going into the class,” sophomore Marina Beelman said. “I haven’t studied the Bible on an academic level, so I was a little worried but Professor Murphy said that everything you need to know, you know. I told myself, ‘OK, I can do this.'”

Keith had a similar experience. She was also curious to find out how Murphy would be able to relate an apocalypse, zombies, and the Bible.

“She does a really good job tying them together,” Keith said. “Usually you say religion is boring but zombies eating brains is somehow gross and amazing. The readings can be long, confusing, and slightly boring but when you get to class and it’s explained, it’s so much cooler.”

Recently the class has been discussing Haitian culture. There were no brain-eating tales in this literature. The zombie persona developed from enslavement and the ultimate fear of being owned by another human. This enslavement meant they did not have the ability to think or do for themselves, leaving them as mindless workers.

“It’s interesting that zombies have evolved so much,” Beelman said. “In the original Haitian culture, you could bring someone back to life if they were a zombie. In the movie “Warm Bodies,” they can be brought back with love, but in other stories it’s different.”

The zombie entered Western culture during colonization and Haitian tales. The Western image of the zombie was ultimately transformed by the films of George Romero.

Before Western culture had evolved the apocalypse to involve zombies, the Bible discussed the end of the world.

“When studying the book of Revelation in its historical context, it is easy to see why some scholars think that this apocalyptic book was written as resistance literature,” Murphy said. “At the time that it is written, the land of Judea was ruled by the Romans.

“The book records one early Christian vision of how God might overthrow the Roman empire and create a new heaven and a new earth. At its heart, the author of Revelation is imagining what he thinks will be a new, better world.”

While Biblical apocalyptic literature’s core may sprout from yearning for a better life, modern zombie culture does not always have the same happy basis. In the popular AMC television show “The Walking Dead,” characters get worse each season.

“Our culture is obsessed with zombies bringing about the end of the world,” Murphy said. “So I wondered, what’s with all the different kinds of zombies and what can we learn about our culture from studying them?”

In modern renditions of the zombie, they are creatures that have previously been human. These creatures lose their vitality in life, with their only goal being to eat brains and flesh.

“We recently learned about the definition of ‘apocalypse.’ It means ‘revealing or uncovering,'” Beelman said.

Zombie and apocalyptic literature can reveal not only the fears of Haitian and Romans at the time of their tales, but also reveal the root of modern fears.

When comparing apocalyptic literature to society today, our culture is filled with mindless consumerism, like the zombie’s mindless consumption of brains. People can spend hours in front of their computers or television without realizing that they have wasted a day and have learned nothing.

Others indulge in shopping, mindlessly buying items that they will not use. Zombie literature could also branch from the fear that consumerism is ruining the intelligent minds of people in modern society.

Technology is becoming more of an integrated part of life and with this, there are questions arising about the ability people have to think for themselves. There is a reliance on the computer, smart phones and other electronics to answer all questions.

“Zombie literature might be commentary on the possibility that we can be our own worst enemy,” Murphy said. “My question is, who’s more dangerous, the zombies or the survivors?”