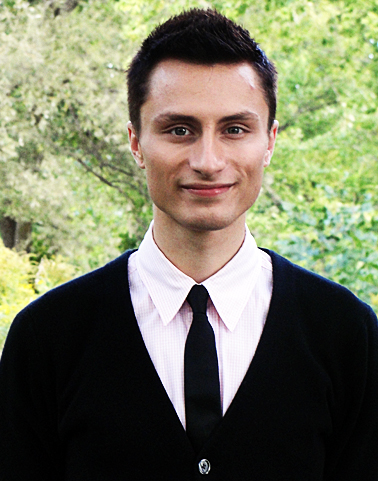 Ben Touchette describes himself as organized, structured, sarcastic and too sassy for his own good − evident from his tabbed text book, organized binder, and crisp black button down shirt, paired with a black and white stripe knit tie and cream button cardigan.

He was voted “Mr. GQ” at Troy High School, and President of the Fashion Association of Merchandising and Design, American Association of Textile Chemist and Colorist, and Kappa Omicron Nu.

From seventh grade until his junior year in high school, Touchette wanted to become a medical professional like his parents. It wasn’t until one day after struggling to click with his advanced biology teacher that he decided he didn’t want to do it anymore.

His parents were very supportive of his decision. But said he felt cheated when they informed him that he could not attend school out of state for the first year.

After completing his freshman year at CMU, he was all set to transfer to Columbia University and even attended orientation. Touchette then realized what he wanted from his school of choice: A program based on academics and leadership.

“I am most happy and most impressed with our professors,” Touchette said.

He liked that CMU Apparel Merchandising and Design professors were well-known from their extensive academic research and eagerness to learn about the industry. Touchette decided to further his education at CMU because he wanted to inspire students and make a difference.

Touchette is majoring in apparel merchandising with a minor in retailing, and wants to pursue a masters degree and a PH.D. He has already made an impact on the apparel program by starting the Central Michigan Chapter for American Association of Textile Chemist and Colorist, which is the second largest University Chapter.

“Everyone was there to support me being crazy,” Touchette said. “This year is going to be insane.”

He is most excited for this year’s charity, the Clothing Closet. The Clothing Closet is a non-profit organization that provides the Detroit Medical Center with casual clothing in good condition for children, teens and parents.

FAMD members who volunteer to design for the organization are required to complete a children’s outfit including a top, bottom and accessory.

“We have amazing students here,” Touchette said. “Our creativity is off the charts, we need to expose it.”

FAMD will be hosting a charity banquet on November 18, where the winner of the contest will be announced. Friends and family will be entertained by performers and will be able to look at all the garments that are on display.

The e-board then plans to spend a day at the hospital with the kids, donate all the designs and present the organization with money raised from the semester’s fundraisers.

Touchette has a clear focus here at CMU: To build relationships, maintain leadership roles and inspire people in the fashion field.

He described it as keeping the passion flowing. Touchette said it’s important to always put his name out there and for future apparel students to be involved in organizations such as FAMD to build contacts.