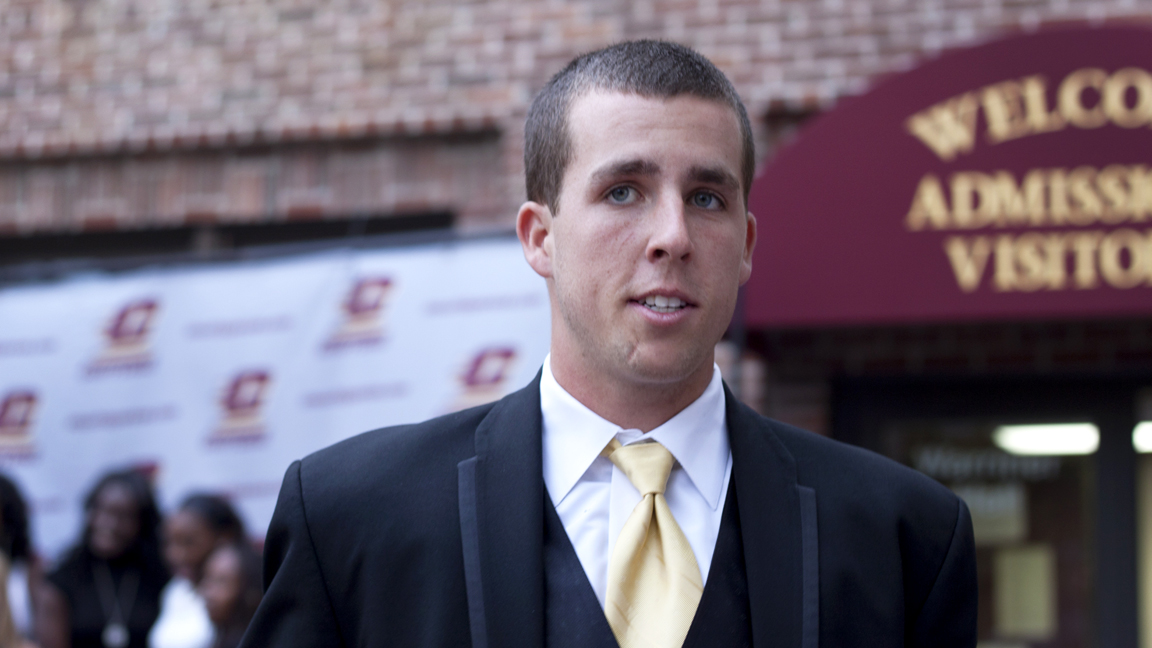 There are typical award banquets for athletics and then there are the CHIPY awards. With so many different emotions wrapped into one night, it truly is an event that everyone should experience.

Central Michigan baseball players Reid Rooney and Sam Russell co-founded the event in 2010. This was second straight year that the event was held and it was a special night for everyone involved.

As of Tuesday Sept. 20, the guest count was figured at an impressive 755 guests and $5,100 dollars had been raised, a total that will grow by month’s end. All proceeds from tickets and donations went to the V Foundation for Cancer Research,  which included an extremely generous donation of over $3,000 by the Putting for a Cure Foundation.

The V Foundation is named in honor of former national champion basketball coach Jim Valvano. Valvano was more than just a coach however, and is best remembered for delivering one of the more inspirational and tear-jerking speeches in recent memory.

He was in the last stage of his life when he gave that memorable speech at the ESPYS, needing help to get on and off the stage. It would leave a lasting memory, as he passed away just two months later.

His words still echo through the minds of those who have heard the speech, “Don’t give up, don’t ever give up.”

“To me, there are three things we all should do every day, we should do this every day of our lives,” Valvano said. “Number one is laugh. You should laugh every day. Number two is think. You should spend some time in thought. And number three is, you should have your emotions moved to tears, could be happiness or joy. But think about it. If you laugh, you think, and you cry, that’s a full day. That’s a heck of a day. You do that seven days a week, you’re going to have something special.”

Cancer affects so many lives every day and Rooney and Russell should feel proud of what they’ve accomplished. They didn’t do it for recognition or to improve their image, they did it simply to help because they could. They knew they had the resources to put an event like this together and they followed through with their plan to help, the best way they knew how.

Former Michigan State University standout and NFL player T.J. Duckett attended the CHIPYS, supporting the Special Olympics. Duckett gave an incredibly inspirational speech and gave his full support and acknowledgement to the founders of the event.

“Central Michigan is very lucky to even have two young men like them (Rooney and Russell) even (attending) this school and not just here to play baseball,” Duckett said.”When I was in school I was worried about me and doing a lot of the wrong things. It was all about yards and touchdowns, what these two young men have accomplished is very special because I know how busy their schedules are.”

Rooney and Russell did away with the label of the typical collegiate athlete. People tend to think that athletes only go to a school to focus on their respective sport and that their education is a completely second tier issue.

“These kids are more than just athletes, what they have done is truly special,” Duckett said.

Duckett was also at the event to present the first annual Phil Kaiser Courage Award. Rooney was thrilled that Duckett could present an award that meant so much to him.

“I was very excited for the courage award as a new aspect to the show, it was a very emotional, special time,” Rooney said.

The award holds a place very close to Rooney’s heart because the award was named in honor of someone who meant a great deal to him.  Kaiser was a baseball player at Bradley University and a very close friend of Rooney, who even played baseball for his father Rob Rooney. There were no signs of illness or disease but Kaiser’s life was taken before anyone knew why.

Kaiser lost his life due to an undetected heart disease that served as the cause for him going into cardiac arrest.

“His heart was so big that you wouldn’t be able to tell there was anything wrong with him,” Rooney said.

The show itself was a great success, as Plachta Auditorium before and after the show was packed full of student athletes, coaches and many other guests. Central wrestling coach Tom Borrelli took home Best Coach of the Year and expressed his gratitude for the award and the event as well.

“I think it’s a nice event for the student athletes to celebrate the past year while helping out with a great cause,” Borrelli said. “There’s nothing more important than being recognized by your family (Central Athletics).”

This is an event that only seems to get stronger and Rooney and Russell hope that the show can carry on after their time at Central is gone. It would be an injustice to not continue this event for years to come. Raising money for a great cause while recognizing the standout athletes from the past season is an honor for anyone to be a part of.