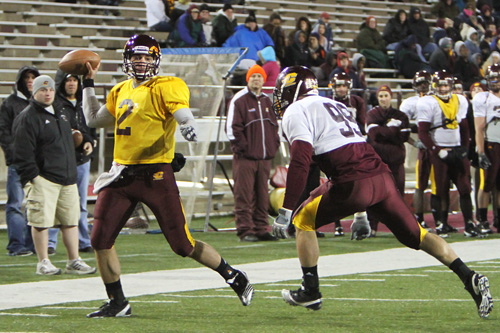 For Central Michigan freshman quarterback Alex Niznak and junior wide receiver Jerry Harris this spring has been a learning experience.

Head coach Dan Enos had nothing but good things to say about Harris, and said the wide receiver has rededicated himself to the game.

“As the entire spring goes, not just tonight, Jerry Harris is a guy who had a great spring,” Enos said. “He really excited our entire staff with how he’s progressed.”

Harris started eight games last season, catching 30 passes for 332 yards and three touchdowns. He had the best game of his career against Virginia Tech in 2010, when he caught five passes for 101 yards and two touchdowns

“He’s been healthy the entire spring, he’s had a great attitude and he’s made plays,” Enos said about Harris. “We need a guy who can make plays and stretch the field and Jerry Harris has that ability.”

The junior wide receiver said he’s looking forward to this season and will look to take on a bigger role in the offense, next to fellow junior wide out Cody Wilson who caught 83 passes for 1,137 yards and five touchdowns.

“I plan on (playing) a big role and contributing to the offense this year,” Harris said. “My expectations for this team (are that) we want to compete for a MAC championship and bring that winning tradition back to Central Michigan and I’m going to do anything I can to help this team reach that goal.”

Entering his second season in Enos’ offense, Harris is more comfortable with the scheme and that is due in part to his dedication to studying his playbook and learning the nuances of the the offense.

“I feel very comfortable now it being my second year, I study even more in my playbook,” Harris said. “We have great coaches so they make sure we know what we’re doing, so it’s easier to learn offense this year.”

NIZNAK IS ADJUSTING DURING HIS FIRST YEAR ON CAMPUS

While Harris, a junior has started to grasp the offense, Niznak is trying to adjust to new surroundings and a thicker playbook in his freshman year. Enos said Niznak will come along as the year progresses and will be a much better quarterback once he puts together the terminology with the offensive scheme.

“He’s overwhelmed with everything but he’s going to be a very good player, he’s a big, strong, athletic guy, he’s smart,” Enos said. “And the spring has been great for him because now he kind of understands the terminology and he’ll have a whole off-season to kind of sit back, take a deep breath, digest it all and I think we’ll see a much improved Alex Niznak when we report in August.”

Niznak proved to be physically capable in the spring practice making several eye opening plays with his arm and his feet. The freshman said the difficulties he’s having are from the mental aspect of the game.

“What you really don’t know coming in is how much mental it is and how much the defense knows it’s mental,” Niznak said. “So, if they know what you’re looking for whether it’s rotation or fronts, they can roll and play with that. So it’s just mental and getting into the playbook, it’s obviously a lot thicker here than it was in high school.”

The transition from high school to college can be a difficult one for any student, so Niznak’s strong relationship with his parents and friends have helped him adjust.

“When you go to college I think everybody figures this out, especially athletes, that your relationship with your family and your close friends grows because it’s by choice, not just that you’re in the same area,” Niznak said. “I feel thankful that I have that relationship with my parents and friends but at the same point it’s not a huge deal because I only live 40 minutes away or whatever it is but I don’t go home too much. So in essence I could be on the other side of the country but after I made my choice, that was definitely a blessing.”

Following the spring game Niznak said he had plenty to work on but he’s main focus will be catching up with the rest of the team in the playbook and simply has to take time to relax as he learns the offense.

“I need to get into the playbook and out here on the field and working with coach (Rick) Perry in the weight room and just try to catch up a little bit,” Niznak said. “Everybody kept telling me don’t worry, you’re so much farther ahead but you get here and you feel like you’re behind. I just need to take a deep breath and relax, you know the spring has been like a blitz.”

Enos said the staff has not made the decision on whether Niznak will redshirt his freshman year and the team will address that issue in the fall. The Chippewas will open up the season at Kelly/Shorts stadium against South Carolina State Sept. 1.