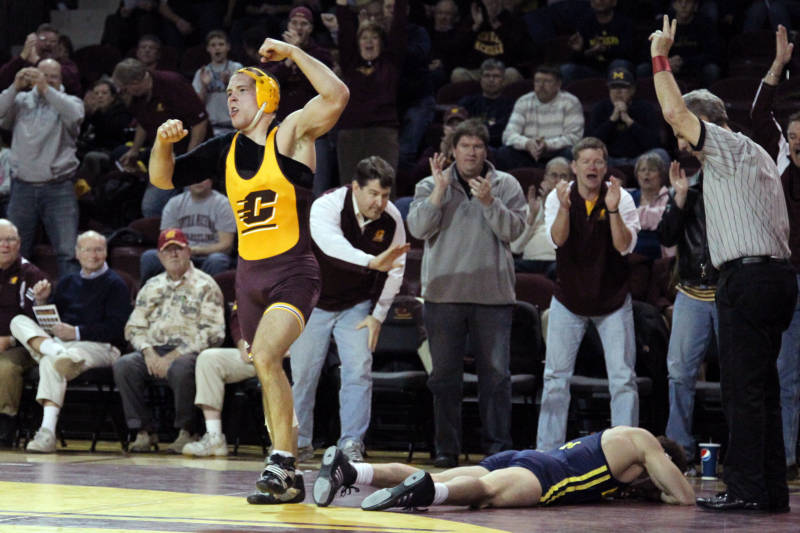 He moved to the edge of his seat. His hands cupped around his mouth as he encouraged his teammates on. He never got this nervous, even for his own matches.

Mike Miller, a sixth-year senior on the Central Michigan University wrestling team, sat up in the stands to watch the 2011 Wrestling Division I Championships. The crowd is not the place Miller was used to being during the third weekend in March; he belonged on the mat.

“That isn’t where I expected to be,” Miller said. “But I wanted to be there for my four guys and help those guys anyway I could.”

It turns out the Chippewas successfully made the trip to Philadelphia without veteran Mike Miller by bringing home a tie for 13th place at the national tournament.  Four Chippewas competed in the tournament: Sophomore Donnie Corby, sophomore Ben Bennett, junior Scotti Sentes and junior Jarrod Trice.

Bennett captured eighth place, while both Sentes and Trice brought back fourth. All three All-Americans earned the honor for the second time in their careers. Two-time All-Americans, a title they share with another teammate, Mike Miller.

“It is heartbreaking to see a kid like Mike end his career like that,” CMU head coach Tom Borrelli said. “Mike is the type of kid you want to reach all of his goals.”

Miller hails originally from Uniontown, Ohio, a small town in northeast Ohio. There he won three state titles along with a school record 165 matches. Miller came to Central Michigan in the fall of 2005.

During Miller’s first two competitive seasons as a Chippewa he earned All- American honors. His freshman season he placed eighth at nationals and won the MAC conference earning Freshman of the Year as well.  His sophomore season Miller won 30 matches on his way to All-American status for the second time. This time Miller fell just short of the national title by losing 8-4 in the finals and claiming second.  Miller’s junior campaign was riddled with shoulder injuries and qualified for the national tournament but failed to reach the podium.

Miller made himself into the great wrestler he is through pure unfiltered hard work. If you were to look at Mike Miller you would never see him as a wrestler, let alone an All- American one. He doesn’t boast bulging muscles. He doesn’t have amazing speed. But what he does have is a heart the size of the Grand Canyon and a gas tank about that size, too.

“Whenever I was trying to get a hold of Mike I knew where I could find him,” Borrelli said. “In the (wrestling) room.”

“I remember when Mike wrestled in high school,” Tom Miller, Mike’s father, recalled. “People around me would go, ‘That’s Mike Miller?’ then he would go out and beat the kid by 20 points and then they would say ‘OOOH’.”

For Miller’s sixth and final year as a Chippewa he planned to finish up his career right. Miller opened up his season with a major decision against Cody Yohn, Minnesota’s 165 pounder. Unfortunately, the next weekend while wrestling a tournament in Las Vegas Miller injured his knee.

While practicing over Christmas break Miller again separated his shoulder, except this time it was his right shoulder. Miller took time to get healthy and came through in front of a raucous crowd by beating his University of Michigan opponent, Dan Yates, in overtime. It wasn’t all roses though.

During the match he popped the cartilage in his ribs, a painful injury. By the end of the season Miller was wrestling like a patchwork scarecrow with braces on his knee, both shoulders and ribs.

“I dealt with the pain because I knew that this was my last shot to wrestle,” Miller said. “I didn’t want to have any regrets.”

His goal was the podium but it never materialized. At the MAC tournament he suffered two losses while taking third. So as he took off his Central Michigan singlet for the last time he had to make a decision, feel sorry for himself or help out his team. Miller finished his career by lending a helping hand to his teammates. He offered all his experience and success at the national tournament.

“Mike really helped me relax and get in the right mindset for Nationals and it paid off,” two-time All-American Ben Bennett said.

When Miller leaves Central Michigan to chase after new dreams and goals he will look back at his time in Mount Pleasant with a smile on his face.

“My career has been tough especially lately,” Miller said. “But I wouldn’t trade my time here for the world.”