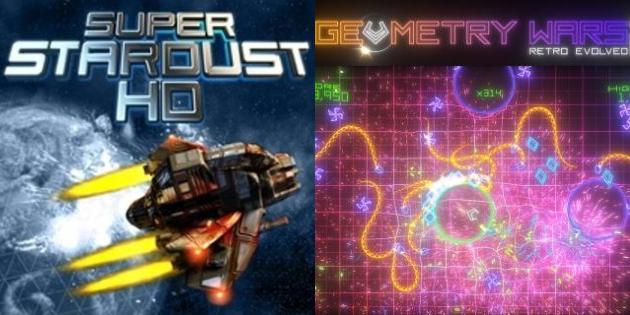 If you were to ask me what my undying game is — what game, no matter how old or tired it may become to others will still be considered when I want to play something and search through my veritable game library — I’d say “Halo.” Many would respond, “Duh. What game other than the obvious choice is your evergreen game?”

Then I’d ponder for a moment and respond, “Super Stardust HD” or “Geometry Wars 2.”

Both of these games make the cut because they are, in a sense, the same game. Players control a small spaceship with the left thumb-stick and fight off enemies using the right thumb-stick to fire, simply by pointing in the desired shooting direction. Enemies kill if they touch the player, and the main job is simply to survive as long as possible.

These two games, however, differ in one major way. “Super Stardust HD” is exclusive to the Play Station 3 and “Geometry Wars 2” was created for the Xbox 360.

These games are everlasting because no matter how good game developers get at storytelling and no matter how lifelike characters or game worlds become, these games will be unaffected by those advances. Graphics also do not matter. Characterization and engaging stories are irrelevant. These two are just as fun and engaging now as they were the day they came out.

Gameplay: In “GW2,” also known as “Geometry Wars: Retro Evolved 2” (an incredibly stupid and excessive title), there are six different modes ranging from “kill everything, all the time, don’t stop!” to “dodge and avoid enemies.” Team-play is also available to gamers. Players can work together and survive the hordes or can try to beat frienemies by snagging power-ups and getting the highest score.

One seemingly minute difference between the two games is the play zone area taking up the TV screen. In “GW2” the fight area is a grid — a 2D graph paper world that doesn’t fit entirely on the screen and there are often areas players are unable to see. In “SSHD” players fight on a planet, a 3D world designed to fit entirely onscreen. Because “SSHD’s” planet doesn’t take up the entirety of the screen, it feels claustrophobic.

Visuals: There’s a reason why the word “geometry” is in the title. Players fight off hordes of squares and other various shapes, which would be boring if the colors weren’t so bright. It’s like a playable acid trip. Shooting an enemy causes them to explode in a random, bright color. Where blood would be, bonafide rainbows exude.

In “SSHD” the meteorites have detail. They will split apart at the exact place you shoot them. The planet beneath has actual visual fidelity. There’s a realism to “SSHD.” Not an exact realism, but a certain believability about it. Players can imagine the game play happening somewhere far, far away. It is the kind of thing gamers don’t realize on the first play through, or second, but once the thousandth game is reached, it’s something they will appreciate.

Sound: To make a short story even shorter, the two games sounds are exactly the same. The ship goes “pew pew pew” while fun techno music plays in the background. It’s appropriate, but not interesting enough to hold a huge interest.

Overall: When it comes to arcade games, where story and characterization do not matter and gamers play in small bits, gameplay is the most important thing. Ultimately “GW2” supplies everything “SSHD” does and then some. Even though “SSHD” may be the more impressive graphically and apparently the higher budget, “GW2” is just more fun, and that’s what matters most.

Winner: “Geometry Wars: Retro Evolved 2” (whoever came up with that title needs to be fired)