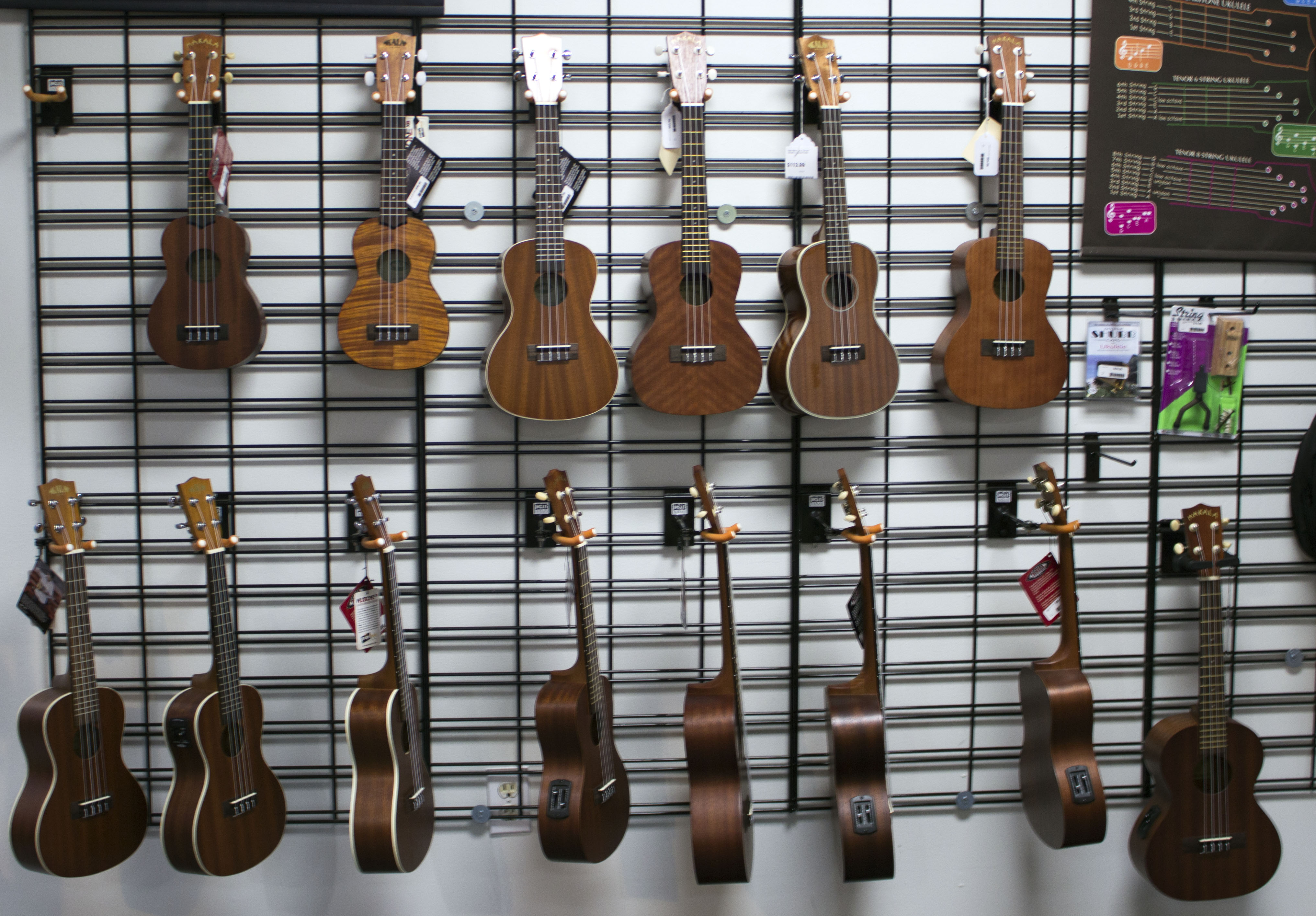 The slightly off-tune, lighthearted strums of multiple ukuleles mixed among the other plinks and plunks created by various other stringed instruments greets your ears when you enter B’s Music Shop and approach the back corner where the Ukulele Club meets weekly.

A small group of four students gathered in a neat, semicircle of chairs facing an elevated platform, with a look of anticipated excitement pasted on their faces, eagerly awaiting instruction.

“I have played uke for about, seven years, and I have loved every second of it,” Sara Jamison said on why she had decided to start the club. Originally having started on guitar in high school, Jamison attempted to find interest in the instrument, but after several attempts put it down and played sports. It wasn’t until years later that she received a ukulele for Christmas that rekindled her interest in the musical world and helped her discover her passion for the ukulele.

Jamison said she had formed a ukulele club at a different music store. The difference was that her first attempt was only an occasional workshop style of class that would be held for only beginning level players on Saturdays. The class was meant to be for those who were trying to learn the basics, so after teaching it for a while she said that she got burnt out after having to constantly teach the same four basic musical chords and strum strokes.

When Jamison moved to Mount Pleasant and started to work at B’s, the shop attempted to host musical workshops of various types for free guitar, ukulele, finger position and stroke technique lessons that were hosted on Sundays. After trying this for a trial period attendance started to falter and fall to lower and lower numbers each week. The ukulele class, however, was the only one that would consistently have students coming back each weekend.

Jamison had been teaching two ukulele clinics at the shop but she had felt that after a while of trying this out, her interested pupils never seemed to have enough time to further expand into the material and truly learn the instrument. After they had stopped the clinics for a while, Jamison noticed that she would regularly have customers who had attended her classes come in and ask her advice on how to play certain chords or perform a certain song.

The amount of demands by customers coming in and asking for advice on playing took too much time out from the sales floor during regular shop hours. This is what then prompted the creation of Uke Club. It started as a group lesson style where everybody who came would work on and learn one song and practice that until the next week’s meeting took place. This format was kept for several months until the varying playing levels of students prompted the need for two clubs, a beginner’s and an intermediate level club.

The beginner level is hosted on Wednesdays and intermediate/advanced is held on Thursdays; this helped better meet the learning level of the various students. The popularity of the club continued to grow and bring in more business to the shop. Austin Wirgau, an employee at the shop, commented on how there has been a noticeable increase in sales on ukuleles after the club was put into regular practice. “I feel that a lot of people get overwhelmed by the guitar to start with and that the ukulele takes everything that guitar has and makes it a lot simpler. It has less strings, and it’s very similar,” Wirgau said. Jamison said that prior to the formation of the club that there had only been one small section of wall of about eight to ten displayed ukuleles.

“Now I have this whole wall that is rather empty now because we’ve been selling them all summer and haven’t restocked yet. We sell so many ukes now that we have uke club,” Jamison said. Next to the wall of ukuleles are two displays with ukuleles hanging from them in the shape of a palm tree, with a plethora of color choices and brands. Jamison went on to say how she felt that ukulele is gaining more and more popularity. In Lansing, there is a ukulele festival every year in May, called “Mighty Uke Day,” which she went on to explain is based on a documentary called, “The Mighty Uke.“

Tanner Schudlich, a student in the club, expressed how ukulele got him back into the musical world after having played the trumpet in high school but deciding to put the art down. “I had stopped after senior year because it’s not a very portable or quiet instrument, so I decided I wanted to continue on with music but not in a class sort of way so I felt that ukulele would be a good fit for me,” Schudlich said.

He also expressed how ukulele club has created a unique friend group and bond between those who regularly attend. “I have friends I live with in the residents halls but none of them play ukulele so there’s this connection I have with a bunch of people, that I share with through music,” Schudlich said. This was the general response and feeling expressed by most of the students who attended the club that night and the energy and love for the instrument was present on all of their faces throughout the course of the hour long club meeting.

The ukulele club is free to anybody that chooses to attend. This is a rare case for those who have taken music lessons before. In most circumstances music lessons can be tedious and a great expense to those who do not choose to regularly practice or fully immerse themselves into the work. Music lessons for any instrument tend to cost up to $20 an hour, if not more. The variety of songs that are taught also vary and are tailored to the students, Jamison explained.

The students have choice of what songs they care to learn and the group will try a new song just about once a week. The pieces varied from anything ranging from oldies, to more modern music such as Bruno Mars. The amount of music out there that can be adapted to play on the ukulele is mere endless.

If you or anyone you know that may be interested in picking up a new musical hobby, ukulele may just be worth trying out. The cheapest ukulele that B’s sells is typically $50-$100, or if you are looking to upgrade to a newer model they have instruments that range nearer to the $150-$200 price range.  The ukulele club runs regularly year round, except for limited hours during the summer. B’s is located off of Mission Street, right here in Mt. Pleasant.

The ukulele according to Jamison is an instrument that is both rewarding and enjoyable to play. Jamison even accredits the ukulele for allowing her to discover more about herself, such as her love to sing and perform while playing the ukulele. Jamison in a cherry tone said, “The ukulele was responsible for my love of music, I just light up when I talk about it.”