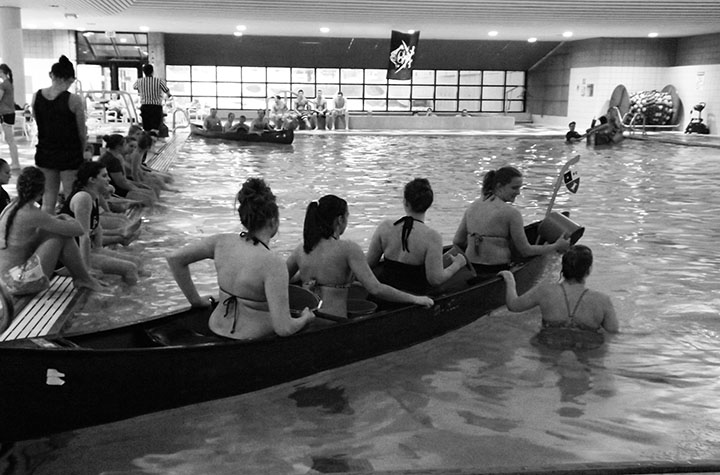 The goal was simple for “Aquatic Battelship.” You have to sink opponents’ boats and be the last team remaining.

The Student Activity Center pool was filled with teams on Wednesday, March 26. Among the teams participating were the P.I.C.’s (Partners In Crime). Freshman Jessica Schweihofer heard about the event through her email and thought it would be fun to do it with friends.

“I got an email through IM Sports and then called some of my friends and said, ‘Hey guys we should do this!’ and we did,’” Schweihofer said.

There were 12 teams comprised of four students each during the sporting event. Each team had the opportunity to play two times, making the competition last a total of six rounds.

Every player had a bucket, which was their ‘weapon’ used to sink opponents’ boats. Four teams were able to play at a time and the rounds didn’t end until all boats besides one remained un-sunk.

Sophomore Becky DalSanto who was also a member of the P.I.C. team said she had an awesome experience. Schweihofer and DalSanto admit at times it could be a little frustrating, but they had to remain calm.

“Especially when you couldn’t bail and you’re in the middle of the water without knowing what to do,” DalSanto said.

The most challenging thing about sinking other’s battleships was getting the water reach far enough so it actually goes into the other teams’ boats.

“It was also difficult with water constantly splashing in your face so you can’t see,” Schweihofer said.

On top of that, there is no way to prepare for the battleship competition. No teams were able to practice prior to the beginning of the game.

“You just kind of wing it,” DalSanto said.

The event sparked memories for sophomore and teammate Allison Doss. She said she had some similar experience and practice with this game in the past.

“We kind of did this in high school, but we had cardboard boat races,” Doss said.

After completing the first round, the P.I.C.’s were able to think of a few strategies to win the next round. Schweihofer suggested for them to be toward the outside of the pool and not in the middle.

“Also to have a system of bailing and throwing,” Schweihofer said. “Having two people do the bailing and the other two do the water throwing.”

Schweihofer said the team would definitely do “Aquatic Battleship” again and hope the event will turn into more than just a one-day tournament.

Instead, the team would like to have more teams and multiple game days to make it more of a long-lasting completion.