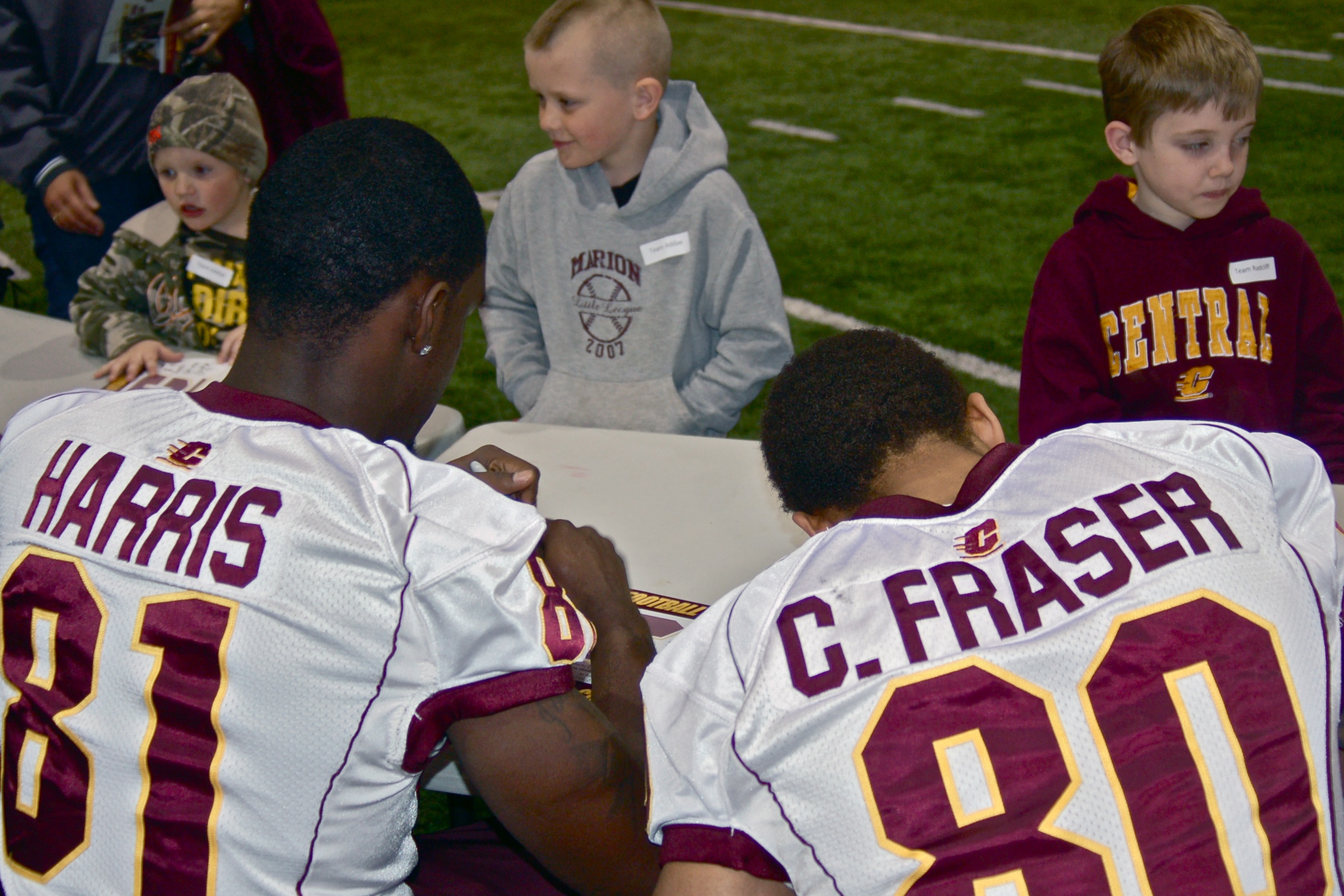 Spring practice is over for the Central Michigan University football team and local youths get to celebrate its ending.

For the third consecutive year, the football team has hosted a free youth clinic—a chance where kids can run around and learn the basics of football.

The clinic began with an autograph session with the team in the Indoor Athletic Complex and a tour of the locker room by head coach Dan Enos.

Once everything was set, the kids ran onto the field from underneath the fog-covered balloon helmet; simulating how the football team marches onto the field before each home game.

Kids of all ages were divided into groups led by players and they experienced the thrills of football while parents watched from the sidelines.

The clinic is done right before the spring game, which gives the young fans an opportunity to meet players and interact with their favorites.

Each year during operation, the clinic has been hosted in chilly weather. Sophomore linebacker Kyle Zelinsky enjoys the youths but can’t stand the weather conditions.

“It sucks that it has been this way the past two springs,” Zelinsky said. “It’s great that the kids have fun but we’re freezing by the time we have to get ready for the game.”

The clinic is used to attract families to spend time with one another before the spring game. Which is a big reason why this event is important to senior defensive lineman John Williams and his family.

With his parents watching from the crowd, Williams works with kids while his wife, Kim, watches their son, Jaylin, who is five-years-old, run around with the rest of the kids. Kim said that Jaylin loves football because it’s a physical sport.

“I tried to get him involved with other sports but he doesn’t like them because you can’t hit anybody,” Kim said. “I guess that’s what makes him happy.”

Jaylin has high aspirations to play football when he gets older and wants to be just like his dad.

“I want to play football just like my dad,” he said. “I want to tackle everybody.”

Former defensive end Larry Knight came to visit his old teammates prior to spring practice. What he remembers during his football days was that the headcount where parents are concerned wasn’t all that high at the clinic.

“When I was here doing the clinics, we didn’t have too many parents come out,” Knight said. “Though somehow we still ended up with a bunch of kids.”

Here’s a rundown of what the kids were doing at each station.

Each participant lined up behind one of the backs as if they were in a real game. Paris Cotton handed them the ball and quickly had to make a move while a pretend Central defender was waiting. Once they got past the defender, a red mat was clear for landing as the participants dived over a stack of agility pads into the end zone. Don’t forget the touchdown dance.

Connor Gagnon, David Harman and Richie Hogan all held footballs as each kid attempted to kick an extra point from 20 yards away.

Armond Staten held a tackling dummy and the participants have to tackle the dummy and fall onto a mat where they recover the football.

Participants lined against wide receiver Jeremy Wilson, who would defend them. Once they passed Wilson, A.J. Westendorp and Brandon Fricke were waiting to throw the touchdown pass from the five-yard line.

With the ball in their hands, the kids weaved in and out of metal standing hoops on their way to the end zone; the hoops are used to train wide receivers to stay low while running a route. The drill was ironic due to the fact that it teaches the runners to stay low, but the kids were too short to even duck underneath the bar.

As John Carr held the tackling dummy, each kid sprinted towards the dummy and pounced through it in order to recover the simulated fumble. After recovering the fumble, the kids had to weave through cones, followed by a 10-yard sprint.