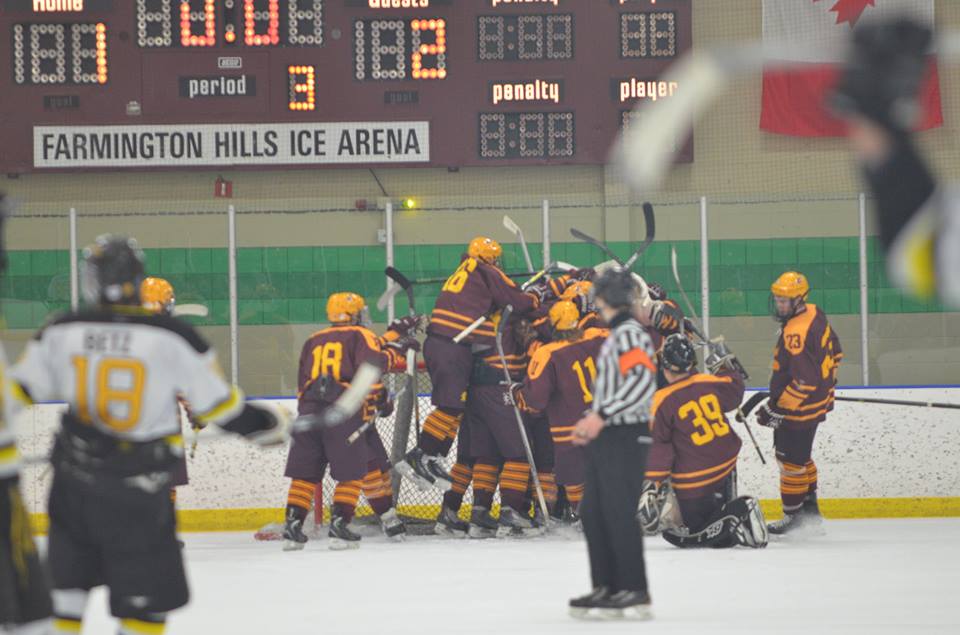 After a heartbreaking 5-4 home loss on Jan. 23, Central Michigan hockey had to fight for a spot in the American Collegiate Hockey Conference regional playoffs.

This past weekend in the ACHA regionals in Farmington Hills, CMU showed its guts, upsetting Adrian College Gold  and Hope College.

Adding to the testament of their playing ability of late, the win over Hope was CMU’s first shutout of the season, with Senior Goaltender Tyler Everlove making 31 saves.

With wins over the ranked 4 and 5 teams in the country, CMU is no longer club hockey pretenders, but National Championship contenders.

“The two wins, they’re huge. That puts Central Michigan on the ACHA map,” Head Coach Tyler Cataline said. “Teams around the country are going to start noticing what we’ve been doing.”

Senior Forward Nathan Allgaier intercepted a pass from Hope with 2:10 remaining in the third period and scored on a breakaway to put the game away at 3-0.

“I was so happy. I didn’t know what to expect. I knew there wasn’t much time left in the game so when I scored I knew that it was pretty much over,” Allgaier said. “It was an awesome feeling, and I’m happy that I could be a part of our teams history.”

Senior Forward Nolan LeClaire started the scoring for CMU in the second period and finished off with his first hat-trick of the season.

In their third season as an ACHA Division 3 program, CMU Hockey has gone from hapless club team to a national contender in no time at all, thanks to the direction of the coaching staff, spearheaded by Cataline.

“We have a real solid core, and have had great captains the past two years,” Cataline  said. “[My two assistant coaches], Travis Gosselin and Michael Desnoyer, have been great doing all the behind the door stuff. If we didn’t have that stuff our program would have failed.”

There was plenty of discussion for the Division 3 team coming into this season, with a massive addition of players, and their first year in the MCHC, the premiere conference of the ACHA. After a hot, undefeated start for the club at 5-0, the team started to have trouble, and they were in need for something to bond them.

A trip to Florida to face off against Florida Gulf Coast University would be exactly what this team needed, as they played with heart and emotion against the previous season’s national runner up.

As fate would have it, they’ll get a rematch against Florida Gulf Coast in their national tournament pool.

“This team has gone through so much adversity this season with the merge of the teams and the players who left and came in, the fact that they can go through all that and is still able to make a national championship is incredibly impressive,” Tyler Marcotte said.

Marcotte is the Director of Video and Media Content for CMU Hockey, and covered the Division 2 team last year as a member of CMU’s Sports Central, and this year has experienced all the highs and lows of the Division 3 squad.

“It all starts with the core – the guys who were there from day one. They made a commitment to make this team one of the best in the country, and it’s that dedication that makes this a great program,” Marcotte said. “That core recruits the players who buy into the system, and hire coaches that believe in a common goal – winning a championship.”

The troubles that ailed the Chippewas early in the season are what have brought them so close and made their ultimate goal more of a reality – winning a national championship.

Allgaier was a member of the Division 2 team for four years, and has seen the culmination of years of effort.

“It’s unbelievable. We have gone through so much the last five years that it is crazy,” Allgaier said. “We have worked so hard for so long. This is the time we’ve been waiting for.”

For this Chippewa team, they have a chance to win the Vezina Cup this weekend, starting Friday, Feb. 26 against the No. 1 team in the country, Oakland University, and then the chase for a National Championship starting March 8.