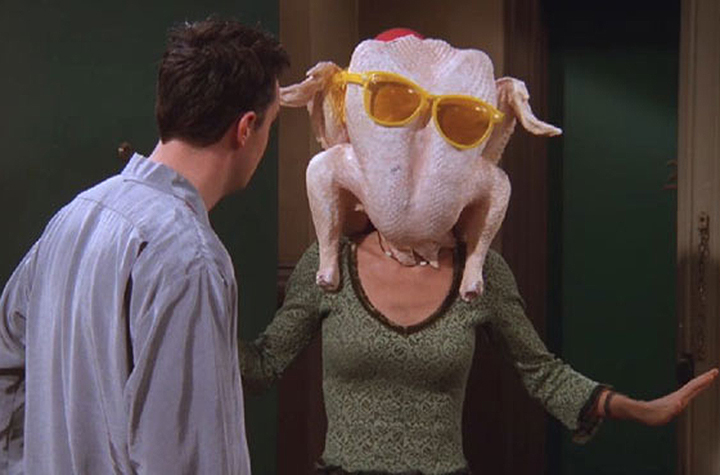 That’s pretty much what Thanksgiving boils down to for most people.

While some of us watch the Macy’s day parade, others watch football and, even still, many stay tuned for the numerous Thanksgiving Day marathons on TV (ahem, Mystery Science Theater 3000).

Luckily, if none of those options float your boat, there are still tons of specials from previous years to watch – most of which are readily available on YouTube.

Before you take your annual turkey-induced nap this year, check out our eight favorite television specials to watch this Thanksgiving.

The episode centers around siblings Bart and Lisa Simpson getting in a fight during Thanksgiving dinner which leads to Bart running away from home. When the family realizes he is missing each of them begins to feel bad about things they’ve said to him in the past. Pretty heart-warming for a Simpsons episode.

Who didn’t love “Sabrina the Teenage Witch”? Okay, maybe not the boys. An interesting “Sabrina” fact is that they had only one Thanksgiving episode, and it happened to be the fourth season premier. At the end of the third season, Sabrina is caught kissing her coffee-slinging co-worker Josh by her boyfriend, Harvey. Harvey subsequently breaks up with Sabrina and, as a result, Sabrina’s aunts plan a traditional, mortal Thanksgiving dinner to cheer her up.

Many of you probably haven’t seen “The Waltons” because it aired in the early ’70s, but I’ll tell you what the show isn’t short on: holiday specials. “The Waltons” was about a rather large family living during the depression-era in a rural town in Virginia. This two-hour Thanksgiving special followed the different members of the Walton family around Thanksgiving one year; specifically, John-Boy, the oldest son, preparing for his love interest to return for the holiday.

Felicity’s “Thanksgiving” episode came long before Keri Russell cut her beautiful curls off. During season one, this group of freshmen were still getting to know each other, and the Thanksgiving special is a particularly heart-warming episode because Felicity decides to stay in the dorms instead of going home and leaving Julie alone on Thanksgiving. With the help of friends, they put on a thanksgiving dinner in the dorms.

Another series with only one Thanksgiving special to its name, Full House’s Thanksgiving episode happened during season one and was a real tear-jerker. It is Danny’s (Bob Saget) first Thanksgiving without his wife and the girls want a traditional holiday at home instead of going out to dinner. Hilarity ensues as the three men try to put together a turkey dinner and tears follow as they try to come to terms with their loss.

Having a rough time during the holidays? That’s exactly what this episode is about. The “Friends” cast members try to comfort Ross in light of his recent divorce and eviction. He is convinced he is having the absolute worst Thanksgiving ever, and it leads to the group telling stories (and having flashbacks) from previous Thanksgivings. Monica is reminded of something hurtful Chandler said and tries to get back at him. It all ends up with Monica apologizing to Chandler by putting a big turkey on her head.

Everyone’s favorite foul-mouthed fourth graders join in on the Thanksgiving action with this holiday special. The kids are putting on a musical about Helen Keller’s life and decide to replace Keller’s dog with a turkey in the spirit of the season. Timmy picks out a disabled turkey and names him Gobbles. When Gobbles isn’t performing well, they threaten Timmy that they’ll have animal control come take him. Timmy gives him up but eventually ends up going on a journey to find Gobbles.