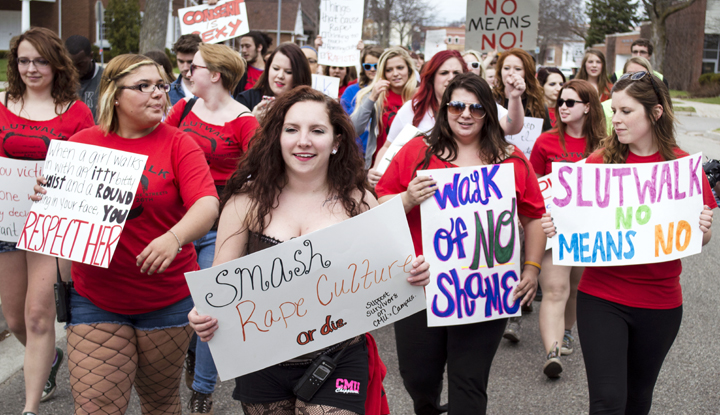 The Organization of Women Leaders held the second annual Slutwalk on Saturday. Survivors of rape, individuals affected by sexual aggression, and people who simply feel passionate about ending rape culture gathered at the University Center before taking their message to the streets.

Participants were encouraged to wear whatever they felt comfortable into the event, some dressed casually while others were clad in fishnets and corsets. Nobody seemed uncomfortable with the wide range of clothing choice — it made sense with the message Slutwalk promotes: a person’s outfit, or the person wearing that outfit is not to blame when it comes to rape. One of the chants during walk was:

This idea of wearing whatever you want goes back to how the first Slutwalk started. During a Sexual Assault Prevention training at a University in Toronto, an officer named Michael Sanguinetti said, “If you want to avoid getting raped, don’t walk around dressed like a slut.”

After the Slutwalkers finished their planned route, everyone reconvened back at the University Center for the keynote speaker, Andrea Bredbeck. Three-time rape survivor, therapist, mother, writer, film-maker and visionary, Andrea has dedicated much of her life to ending rape culture by starting the conversation about rape in order to cause social change.

When discussing the history of Slutwalk, Bredbeck explained how Sanguinetti’s charged statement about ‘dressing like a slut’ was what spurred a movement.

“He inadvertently stumbled into something that rocked the world,” she said.

With many Slutwalks under her belt, Andrea says a participant’s experience in the walk will depend on their point of origin.

“If the individual is a survivor, and for example a survivor that’s never told their story, I would imagine and hope that people would feel supported — because they could assume that they are in a large group of people where a pretty high percentage of them may well be survivors,” Bredbeck said.

“My hope is that people do experience an increase in their adaptions to the traumas that they’ve lived, and they find support in this group to go and get some help. I’ve never seen it do harm.”

Intentionally controversial, the Slutwalk carried the common theme of Slutwalks worldwide: to end rape culture, but with a focus on supporting rape survivors.

“At the very least, it gets people thinking,” Bredbeck said. “And if people are thinking, it gives us the potential for a conversation. And change doesn’t happen without those conversations.”