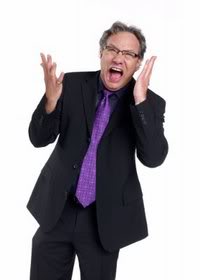 You wouldn’t think it’s easy to speak on the phone with a man like Lewis Black. He has a reputation of plunging the depths of uncharted fury like few comedians. Fans of his stand-up plug in to his rage to recharge their batteries. These days it’s in no short supply.

Twenty-five days before he’s set to take the stage at Soaring Eagle Casino and Resort, Black shows no signs of slowing down the rage machine. His special is titled “In God We Rust,” but he says it’s not as religious as the title implies.

“We’re rusting,” he said, emphasizing that there are many more political undertones than religious ones.

That rust is something he’s accustomed himself to. When I tell him about the recent work stoppage with CMU’s faculty, he hardly seems surprised given the recent union wars in Wisconsin.

“You can’t treat people the way they’re treating people,” he said of the CMU administration and the American business system at large.

Black has stressed in other interviews that he does not wish to be a pundit; his job is to be “Skippy the Clown,” as he puts it.

“A comedian is more worried about the joke,” he said.

However, during the conversation, he tended to shy away from punch lines and really laid into issues. When he says something like, “You have to really not care about people,” to refer to what America’s politicians did with the debt ceiling issue, it gives away more than his disdain. As much as Black proclaims he has given up hope, lines like that show undercurrents of caring and disappointment.

Black tours roughly 200 days a year, letting equally bewildered if more emotionally restrained crowds of all types make a spectacle of their collective fuming. He is also noted for his scathing monologues on “The Daily Show,” in his “Back in Black,” segment, where he rails on everything from Fox News to things like Harry Potter Camp.

“We go back and forth depending on my schedule,” Black said. “Usually they make the decision as to what we’re gonna do because Jon (Stewart) likes the show to have a certain thread that runs through it.”

Despite the wild personal success that has followed Black’s career- a special at Carnegie Hall, three books, a TV show of his own on Comedy Central- he doesn’t think comedy as a profession has changed much since he started. He does concede that, “Our taste for comedy has gotten a bit darker,” following September 11th.

Headlines have been so rapid-fire since then that Black’s act has had no shortage of fuel. In fact, there’s so much material rampaging through his brain that he may have an entirely new special configured by the time his Soaring Eagle date rolls around.

“My special is changing… and so is America, for the better I’m sure,” he said, pitch-Black sarcasm well in tact.