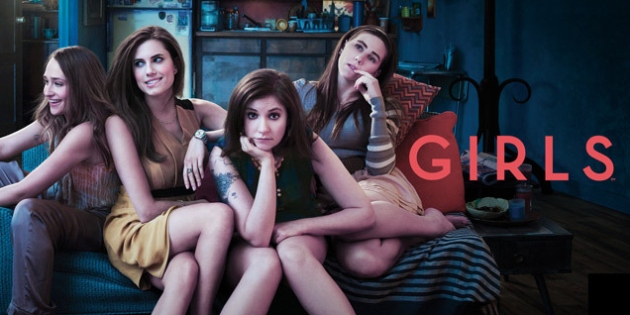 “Girls” is similar in that it is a story about four privileged young white women making it in New York City.  Their degree of success (and their access to name-droppable fashion items) is decidedly different, though.  Though “Girls” features a lot of sex in the same city, intrinsically it did not start off as a show about sex.

As Willa Paskin wrote in her recent recap of season two of the show (which ended on Sunday) in “Salon,” “The initial episodes of ‘Girls’ presented the experience of regular, flawed, affluent chicks, a subject some people adored (this writer included) and some people hated.”

Paskin goes on to criticize the depressing string of episodes near the end of the second season, saying that “Girls” turned into a twenty-something female narrative that “our culture is comfortable seeing,”  which is that of breakdowns and mild catastrophe.

Hannah Horvath (played by Dunham, who also writes and directs most episodes) is no longer simply stubborn, eccentric and insecure, but a full-fledged, OCD-ridden depression case.  What made “Girls” such an interesting show was its blatant attempt at redefining the body politics of television.  Even if it was on a sexually freer network like HBO, with shows like “True Blood” and “Game of Thrones” as equally devoted to fantasy mythology as nude fantasies of a different kind, the female gaze has been decidedly absent until now.

This sudden mental condition is something the show, which is to say Dunham since she is the show in almost every sense of the word, is trying in vain to sell as realistic.  It is a blatant attempt to add dramatic weight to a show that has been criticized (and often rightly so) for being an overtly privileged work.  “Girls'” responses to the complaints have often left the show worse off.  Addressing them was crucial, and missing the mark has been somewhat detrimental to the quality of the show.

For everything that “Girls” is criticized for, though, it is also praised for in almost equal measure.  Are we hailing it for capturing a “specific zeitgeist of twenty-somethings” or criticizing it for being too specific?  What’s more important about these critiques isn’t that different people of different backgrounds disagree about the show, but how Dunham chose to respond to them.

“Not enough minority representation?” the first few episodes of season two seemed to be saying.  “Did I mention I’m sleeping with a black Republican?”

That season two opening salvo of faux race relations was perhaps this season’s most troubling outing.  Not only did Dunham deliberately force a black character to the foreground, but she discarded him (Donald Glover) as soon as she’d made her half-point.  He was never an actual character but rather a point to be made after an attention-getting sex scene.  Even if the show’s responses to certain critiques were somewhat anticipated as co-showrunner Jenni Konner said in an interview, they still chose to respond to them in this very shallow way.

From this troubling subplot an entertaining but somewhat mediocre second season continued on; it was more of the same, just heavier and, as a result, not as interesting.  However, it did stop at episode five, midway between its decline to full-on depression, to give perhaps the show’s best episode so far.  Almost the entirety of this episode, titled “One Man’s Trash,” takes place inside a middle-aged man’s brownstone while Hannah stays over a few days.  Joshua (Patrick Wilson) is the antithesis of nearly everyone else this show is so fascinated with, which basically means he’s got his shit together professionally. This episode truly showed Hannah as disillusioned and somewhat pitiful, something the rest of the show can’t seem to do without making her full-on crazy.

“One Man’s Trash” was as formally and narratively advanced as many of the latter episodes of the season were not.   The second best episode was the seventh one, “Video Games.”  This was mostly because of the terrific performance from Jemima Kirke, who plays Jessa, probably the freest spirit of the bunch.

The main crux of this episode is that Jessa is visiting her dad in northern New York and brings Hannah along to make things less uncomfortable, which for those who know Hannah is in and of itself a deep irony.  This episode may just seem good in the context of the many others that take place in city life, but the trip to the country and the presence of nature really added to the effect of the writing.

“Video Games” was one of the few times this season that the girls of “Girls” spent any real, quality time with each other.  For a show that started off being about the bonds of friendship, that really is saying something.  The other two main characters, Marnie (Allison Williams) and Shoshanna (Zosia Mamet) continued to grapple with relationships, the latter being much funnier and the former being much more conventional.  For the most part, though, they did it with out each other.

The series’ main testosterone producer, Adam (Adam Driver), spent most of the season trying to get over the season one heartbreak with Hannah by getting into bed with other women.  By Sunday’s finale, though, they were together again, her with mental issues that manifested in a grotesque haircut and him with the sudden urge to kick down a door and play Prince Charming(ly slimy).

With this season two finale, “Girls” has morphed into a different beast entirely.  It is a show that seems obsessed with addressing its critics in increasingly less effective ways.  Its answer to race is to showcase Donald Glover for a few episodes; it addresses millennial work ethic with surprise mental problems and “lucky” people who get deals to make smart phone apps.

If the absence of these certain self-critiques was the most troubling thing about the first season of Girls, then their “resolution” (as if there is a tangible one to race in America) is even more troubling.  The dialogue and the humor remain as strong as ever, but what exactly the characters are saying has become darker and as a result, kind of boring.