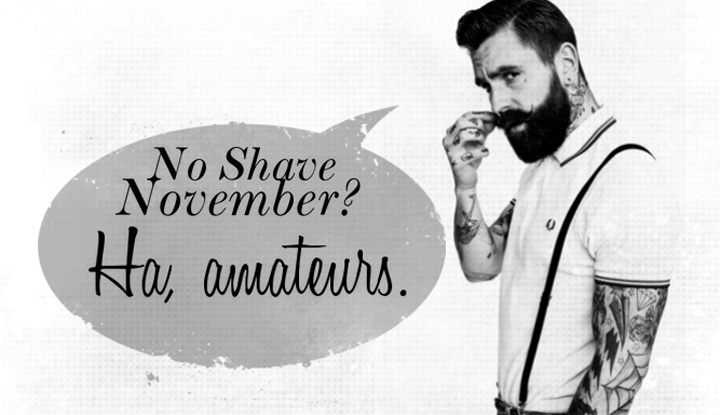 I hate No Shave November.

I know it’s for a good cause and all, but couldn’t guys show their support another way?

No Shave November just seems to drag on and on and for what? None of the guys I know actually donate or raise money for the cause (which is cancer awareness, by the way). They just do it for the sake of doing it and all you get at the end are a bunch of hairy guys (and a few hairy girls.)

I guess the thing is, I’m not a facial hair person to begin with. I love a good mustache (who doesn’t?), but not on college guys. Sorry for my judgment, but you all look a little like pedophiles to me. Mustaches and middle age both start with an ‘M,’ people. Think that’s a coincidence?

Beards I don’t mind as much. The right guy can rock a good beard, as long as it’s clean and well-maintained. (In case you couldn’t guess, Duck Dynasty is not my thing.)

But in No Shave November, a clean-shaven guy is about as hard to find as a parking spot in the Moore lot at 2 p.m.

To be honest, it’s the middle of the month that gets me. I don’t mind the beginning, when guys have that cute scruffy thing going for them. And I can tolerate the end, when they all look like lumberjacks. But it’s now, the middle two weeks of November that I absolutely hate.

For one, this is the awkward stage of beard-growing. During the first week of November, guys have that adorable “It’s been a few days since I’ve shaved, I kind of look like Brad Pitt if you squint your eyes” look. It’s cute. I’m not completely against facial hair — I can dig it.

But after about a week, guys progress into the super scruffy, untrimmed “I seem to have lost my razor” stage. The worst part of this is not just the way it looks (bad), but the way it feels. Halfway grown-in beards are super scratchy and for girls, this is downright uncomfortable. Not only do our boyfriends look terrible, now they feel terrible, too. No more kissing for you, pal. Not ’til you shave.

And this continues for a whole month.

I mean, it’s for a great cause. But the whole point of No Shave November is to donate the money you put toward shaving and facial grooming to raise awareness for cancer and who actually does that? Most guys just grow out their beards for fun and then shave them off in December, which is completely and utterly pointless.

If you ask me, the original goal of No Shave November has been lost in the forest of facial hair. And that’s why I hate it.