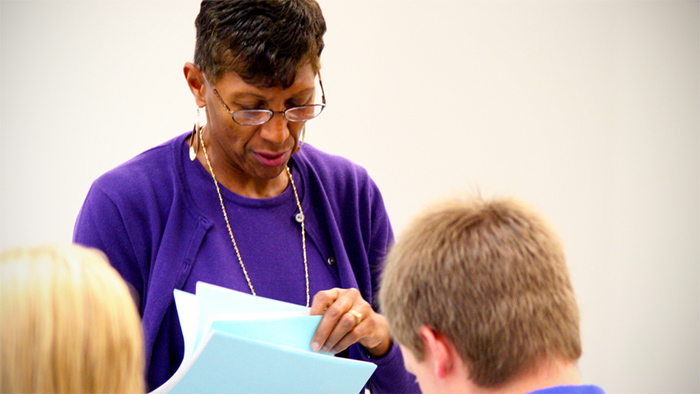 Dr. Joyce Baugh strolls into her political science class with time to spare, time to organize and time to answer any questions posed by students. This is her third class of a day teaching constitutional law, American government and the Civil Rights Movement. After shuffling her papers and reviewing this session’s plan, Dr. Baugh looks out into the classroom, observing her student specimen. She watches through glasses as thick as her notebook, as her students fiddle on their phones, blast music through to their headphones and update their Facebook statuses. She knows it’s going to be a tough crowd again today.

Apart from her physical appearance, there’s a lot students don’t know about Baugh. They see a tall, slender, African American woman a little older than their parents. They see a poker face that means business but a warm smile that welcomes them in. 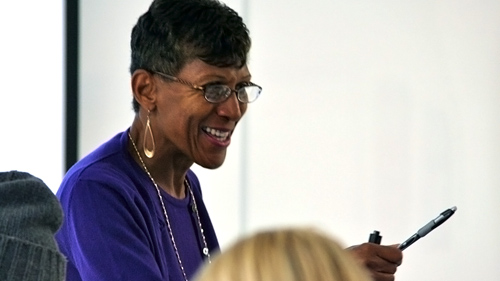 For some of them, there are a lot of conversations they’ve never had with her.  But if they’d ask, she’d tell them what she thinks. She grew up in Charleston, South Carolina. That’s South Cackalacky if you ask her, and she lived in a time of segregation and racial turmoil.

“When I grew up you just knew there were places you could go and places you couldn’t go,” Baugh said. “One of the strongest memories I have is the feeling of being deathly afraid of the police.”

The nation was in a battle of wills over integration compliance. So for most African Americans, authoritative figures didn’t evoke a sense of security. In the beginning of her fifth-grade year and nearly 15 years after the 1954 case of Brown v. Board of Education, Baugh’s school integrated. It was only after the federal government threatened to pull public school funding and offered reward for compliance that the school cooperated. This is what Baugh calls the “carrot and stick approach” in which schools were rewarded with extra funding or punished with a cease in monetary support. And it’s the only reason our nation’s schools are legally desegregated. Numerous schools in the nation and particularly states in the South refused to open their doors to an integrated student body until their bread and butter were placed in peril.

After high school, Baugh attended Clemson University as an undergraduate. As the years of explosive disturbances and overt racism became less prominent, subtle prejudice and passive aggressive behavior took hold. To Baugh this was never more apparent than during Clemson’s football games as some students–particularly a fraternity–boasted and wildly waved the Confederate flag in line with the university’s flag.  The Confederate flag is a persistent and largely misunderstood symbol and for those who feel its implications of racism, it can provoke negative emotions.

“You’d be cheering for the team and getting excited about the game and then that flag would come in and it was just a knowing in my gut,” Baugh said, tapping her stomach. “That I was to be an outsider.”

After moving north to attain her master’s degree and doctorate at Kent State University, that feeling of exclusion persisted.

“The big difference in the North is rather than laws that separate races, you have extreme residential segregation,” Baugh said.

And when she began teaching at Central Michigan University in 1988, this residential segregation proved powerful in Michigan, and extremely obvious in metropolitan areas like Detroit.

Baugh’s interest in race relations in Detroit strengthened and became her work. In February 2011 she released a book titled The Detroit School Busing Case, which explains the Milliken v. Bradley court case and its continued significance. Because of her expertise, she’s been asked to speak at conferences like State Bar of Michigan’s Legal Milestones. Extensive research and observation have led her to not only recognize problems in the past, but connect them to problems in the present–and the innability to do this is what Baugh believes hinders today’s generations.

“It seems that people have become a-historical.” Baugh said. “They fail to make connections and fail to ask how things came to be.”

This failure to recognize problems and therefore create solutions could be attributed to the disconnect of students more concerned with their personal social sphere. Perhaps to end prejudice students need to talk to each other, get involved and shape the world around them. Political activism among the youth today is a far cry from students during the Civil Rights Movement Baugh witnessed.

“This generation sees government as the problem not the solution but the truth is, without government intervention, I wouldn’t be sitting here teaching today,” Baugh said.

While CMU’s required diversity classes help students learn about cultural history in the United States, Baugh believes the key to progressing and eliminating racial prejudices political engagement and joining organizations like The Michigan Roundtable for Diversity and Inclusion. She insists that legislation should evolve with generations. These rulings are not carved in stone and should be a jumping off point for advancement.

“With public policy, you can change anything you want to change,” Baugh said.

As she watches her students before the start of class she wonders if their generation will grow into their britches. She wonders if they’ll make changes like the ones she witnessed as a child. Where did the efficacy go? She ponders if her students would put their lives on the line for freedom, for equality, for integration, for education. She’d let you know what she’s seen and what she thinks if you’d ask her. But for now, it’s time to teach.