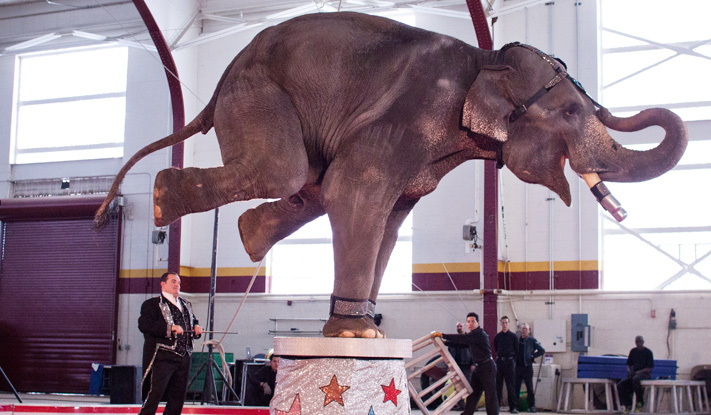 Finch Fieldhouse was the host of the Jordan World Circus on Sunday, March 9, where rare white tigers, acrobats, aerialists, clowns, artists and gentle giants were all on display.

Decorated with cages, ropes, and three huge circles spread out side by side on the ground for the animals and aerialists, the building quickly started to get crowded as spectators began filing in and children outnumbered adults.

The scent from the variety of animals — ranging from small poodles to the massive elephants — was in the air, and it was a clear sign the show was about to begin.

The circus brought out the rare white tiger and two African lions to start the show. They showcased their skills by jumping through flaming loops and hurdling over barriers, receiving big applause from the audience.

Several poodles appeared, showing off their amazing leaping abilities by jumping through hoops. One poodle became the crowd favorite as he walked around the center circle on his hind feet and drew “Aw’s” from the audience.

It was now the elephants’ turn to amuse the crowd.

One elephant displayed his musical talent by playing instruments like the trumpet and harmonica. Other elephants stood up on their front legs and performed a handstand while doing synchronized tricks like having a hind-leg and front-leg up at the same time.

The acrobat team of six (known as the “Chicago Boyz”) put on an incredible show, exhibiting an array of acrobatic jumps and astonishing jump rope tricks involving multiple ropes.

“I love performing with the skills I have,” Williams said. “One a scale of one-to-10 it’s definitely a 10 because we do it for the kids and a lot of kids love us.”

Seven members of the audience volunteered to go perform with the “Chicago Boyz” at their request. The acrobatic team then jumped over the audience members as they bent down in a straight line.

Dennis Nalor, one of the volunteered audience members, said he loved every second of it.

“It was a thrilling experience,” Nalor said. “Each time a Chicago acrobat guy would jump over us, they would then have to go to the end of the line, which made it that much further for the next acrobat guy to jump.”

Intermission offered a time where kids got the opportunity to interact with the circus animals. That included elephants, pony rides, and pictures with the poodles. There also was a place for kids to get their face painted.

Kimberly Young, a mother of two, let her children participate in the intermission interacting.

“I enjoyed the way the kids were allowed to have some time with the animals.” Young said. “I know for sure my kids enjoyed it.”

The Jordan World Circus concluded with a motorcyclist jumping from one ramp to another performing numerous mid-air tricks which also drew roars from the audience.

“It was great,” Hoffmeyer said. “Everything was great. I enjoyed all the performers, including the animals.”