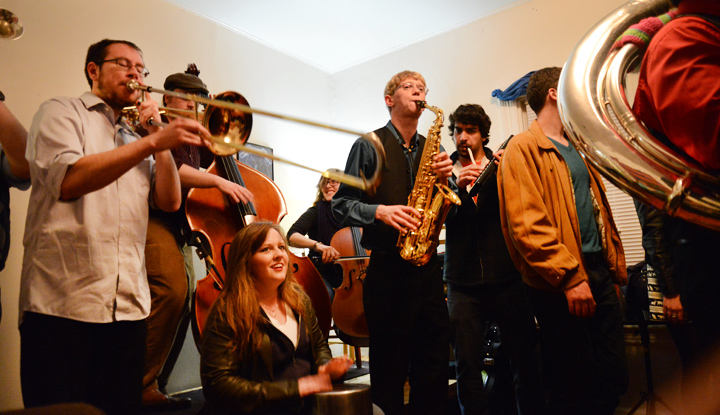 As local Mount Pleasant band Kavazabava parties on stage, the audience parties on the floor while dancing to the high-tempo music.

Kavazabava, formed in 2012, is made up of 20 people playing music with Eastern-European roots, specifically Serbian, Romanian, Ukrainian and Hungarian, with a variety of genres including klezmer, gypsy, and folk.

“They have something for everyone,” junior Grace Ronan said after their show at Kaya Coffee House’s Open Mic Night.

The band formed when several band members heard Mike Romaniak playing his sopilka, a Ukrainian flute, and wanted to learn what he was playing. After several of these encounters, the group decided to get together once a week to learn Eastern-European folk music.

Once the band learned enough songs, they took their talent to Kaya for their Open Mic Night and have since been spreading their love for music, tradition, and energy to the Mount Pleasant community.

After their premiere at Kaya, the band came up with the name for their group: Kavazabava (“Kava” meaning coffee and “zabava” meaning party).

As the band has grown and developed in not only numbers but in friendship, Romaniak has found that everyone brings something different to the band. With improvised solos, musical jests, and harmonic deviations, the band has been able to spur their audiences into dance and laughter.

“You can watch the same show twice, while watching someone different, and each time you can see something new,” Romaniak said.

Because the band follows the aural tradition of learning music by ear, band members have the freedom to create a unique relationship with each other and improvise when tempted.

Throughout Kavazabava’s show, group members exchange smiling glimpses as they notice when someone has improvised a part of the song and when they added their own twist to the song. This musical relationship has also shifted to the member relationship as well.

While some students went to Florida to enjoy the beach during Spring Break, Kavazabava went on a state-wide tour going to Montague, Muskegon, Grand Rapids, Detroit, Flint, Ann Arbor, Detroit and Lansing.

While it proved to be a very busy week for Kavazabava, Romaniak said “the tour has definitely brought us together.”

Throughout the tour, the band was able to play with other bands, perform at local venues, and spread their unique sound with people from all over the state.

“I’ve seen bluegrass and I’ve seen klezmer music, but I’ve never seen them together,” Shelly Jarenski, a University of Michigan professor, said after Kavazabava’s show at The Yellow Barn in Ann Arbor.

To learn more about Kavazabava, visit their website or stop by Kaya Coffee House on Wednesdays during their “Open Mic” Night when they play at 10:30 p.m.