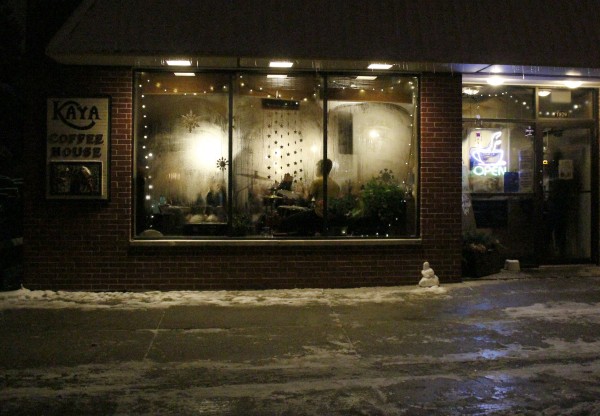 The windows fogged on the other side of a cold winter night. They condensed as coffee steam rose and the artists breathily delivered their chorus. It’s a Saturday night at Kaya Coffee House and this is something new. Mount Pleasant music veterans Joe Hertler and Kevin Thibodeau took the stage underneath the pillow-like coffee sacks covering the ceiling for Kaya’s Mid-Month Music Series kickoff.

Along with a whir of grinding coffee beans and the hiss of foaming milk, music is nothing new to bounce off the coffee house’s walls. In a weekly event, Wednesday’s Open-Mic Night gives way to artists of all walks eager to share their creations with the crowd. These events are great for beginning musicians to sing, strum, scream, pound and do whatever it takes to relay their message. But Kaya’s music manager Ryan Heisler wanted something different; something more professional.

“We wanted to have something a little more official and make Kaya more of a music establishment in Mount Pleasant,” Heisler said. “This is going to be a more serious musical endeavor than we’ve ever had before.”

The Mid-Month Music features a handpicked feature artist and an opener who applies and undergoes a screening process. If Kaya hears something they like and like the way an artist performs, the band gets to open for the feature artist. Something else that strays from Open-Mic Night is the cover charge associated with the event, which results in musicians getting paid for their performance. All cover proceeds handed over at Kaya’s door go to the musicians of the night. On the second night of the fresh event, these musicians were Kevin Thibodeau and Joe Hertler. They encouraged people to support the recent innovation of the concert series.

“Drink the coffee and support the local business and possibly a local musician,” Hertler said.

Thibodeau and Hertler played separate acts but they met each other as frequent Kaya attendants, both playing guitar, harmonica and keyboard to the rows of mismatched chairs. The personalities between the two of them and the music they performed matched the venue well; they were comfortable and candid among the Easter-egged turtles — Kaya’s symbol. It’s Heisler’s job to quilt these small factors and quirks together to prove the coffee house’s venue potential.

With curse words, muffled lines, and guitar strings curling beyond the neck, they were far from flawless. But in some sense, they were perfect.

As the Mid-Month Music Series’ maiden voyage came to a close, it proved that another venue is on the rise.