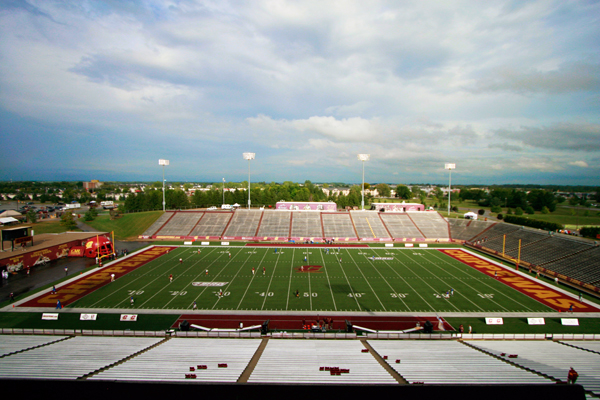 The team’s home stadium, which was awarded finest in the Mid-American Conference by Sporting News in 2009, is actually named after two people.

“Shorts” comes from Perry Shorts, a 1900 Central graduate who was a distinguished banker and generous donor to the school. The stadium was originally named after him when it opened on Nov. 4, 1972.

“I’ve always wondered what the slash in the middle of Kelly/Shorts was for,” Hartland junior Zack Cooper said.

Many students seem to overlook the stadium’s historical aspects, understandable considering the traditions surrounding other football programs in the state.

However, the history of Kelly/Shorts stadium extends beyond its namesakes.

The assistant athletics director for facilities and events at Central, Greg Kigar, can point out several distinguishing moments that have taken place on the Chippewa’s football field.

“It’s the site of the first collegiate game to be played on Astroturf in Michigan,” Kigar said.

That was accomplished when CMU faced Illinois State in 1972, a 28-21 victory. Central also won the NCAA Division II National Championship in 1974 with Kelly/Shorts as their home field.

While football accomplishments add to the lore, the history and tradition of Kelly/Shorts also relies on the students and fans of Central. Kigar was a student at Central in the 1980s and he has fond memories of Kelly/Shorts.

“My favorite memories were my days as a student,” he said. “When we all couldn’t wait to come to the stadium for games.”

Due to that reason, Kigar works to make football games enjoyable for all.

“I think Kelly/Shorts is the best stadium in the MAC,” he said. “There are some great game day atmospheres around the country, but I think its pure numbers, that make the larger profile games seem that much greater.”

Cooper said football games are some of his best experiences at Central as well.

“I think the stadium’s pretty sweet,” Cooper said. “The changes they’ve made recently are nice, too.”

While money continues to be spent on the athletic facility, not just football games take place at Kelly/Shorts.

Kigar pointed out that a tunnel also runs from the Turf Bay into the Indoor Athletic Complex to the field. This helped allow the stadium host the school’s May 2010 graduation ceremony.

New opportunities to create good memories at Kelly/Shorts are on the mind of the facilities staff.

“We are always looking for subtle ways to provide and create positive customer service,” Kigar said.

With graduation ceremonies like the one held this year, and Michigan State and Navy due to arrive for home games in 2012, it appears the history of Kelly/Shorts will continue to be made.