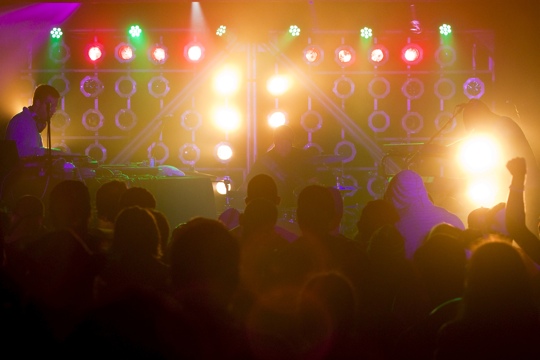 With four of the five Double JJ Ranch stages being subject to harsh weather, the one indoor venue became a point of refuge. The Wagon Wheel, located on the southeast corner of the property, gained attention not only for its dry comforts, but the act that provided the soundtrack.

Keys N Krates is a Toronto trio capable of starting any party. Jr. Flo, Adam Tune, and Matisse – a DJ, a drummer, and a keyboardist/vocalist.

“It’s less about the setup and more about how we use it”, Flo said.

Keys N Krates, known for their house-banger mixtape, ‘Almost 39 Minutes’, performed Thursday night in wake of a missing opening-act. The set list enticed crowds with familiar favorites, with a twist.

Pop samples taken from the last two decades were pounded with new rhythms, transformed into new melodies, and created with new technology. This 90s hybrid-genre encourages active participation and a well-polished musical memory.

Thursday’s 10p.m. performance was a melting pot of jazz, hip-hop, and rock samples. Jay-Z’s “On to the Next One” was transformed from its chugging tempo set by its lyrics, into an elastic break-beat groove.

In addition to hip-hop classics such as Jay-Z and Dr. Dre, the group mixed electronic staples such as “D.A.N.C.E.” by Justice, accompanied by original instrumentation. The construction of the group’s playlist is determined by its trial run at rehearsal.

“Flo may hear a sample and bring it to rehearsal. Sometimes it’s shit, and sometimes it’s good”, Tune said. The percussionist uses varieties of both traditional and synthetic means of measure. Multiple modifications help to make this unique level of volume possible (loud!).

Keys N Krates are expecting their first EP as soon as this fall, assures Matisse. This will be available for download upon release.