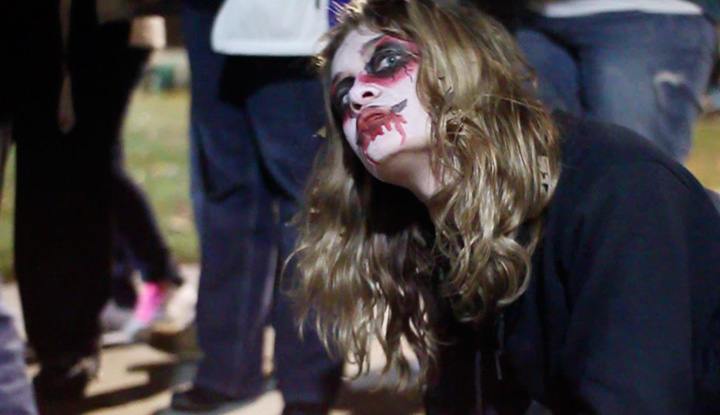 Trout Hall hosted their 18th annual Legends of the Dark tour, as numerous Central Michigan students left with at least one new ghost story to tell.

The haunted campus tour was held Oct. 23 through Oct. 25. Trout Hall put a lot of work into making the event as spooky as possible. There were 125 volunteers to bring the tour to life as either a “scarer” or a storyteller.

Thirteen of the volunteers were storytellers that acted as tour guides, taking a group from one end of campus to the other, to hear each haunted campus story and entertaining the audience.

“Legends of the Dark was a blast,” freshman Blair Albert said. “I loved hearing the different stories from all around campus. I never realized how many there were.”

The volunteers, face-painted and putting on a show, had just as much fun as the participants.

“The best part about being a scarer is getting great reactions,” freshman Mia Mannella said.

The scarers followed participants around, peered out of waste bins and gave those on the tour goosebumps.

“I wanted to be a scarer because I love creepy makeup and Halloween,” freshman Jean Esch said.

Trout Hall’s liaison, Ally Fuhs, worked hard to put the Legends of the Dark tour together. She started in the beginning of September with director Kortnee Henski.

This year was Fuhs’ first time helping organize the event, but she has always been a past goer.

“I love how professional everyone is and that the tour really is like a haunted house,” Fuhs said.

Fuhs believes the tour is not just entertaining, but tells a story of the Central’s past in a spooky way. The tour tells over 10 stories of hauntings on campus, beginning at Warriner Hall.

“Our tour begins here at Warriner Hall, which was built in the mid-1920s after being burnt down,” the tour guide explained. “Now, in 1937 it was reported that a food service worker was working late at night and for some reason, stuck her head in the elevator, not knowing that it was stuck between floors. Unfortunately, she suffocated and died when the elevator came crashing downwards.

“From that day on, there have been reported sightings of lights flashing on and off from the sixth floor, which is impossible since the room has been locked off and hasn’t been used in decades. The only individuals who have a key are the custodial staff. Even still, there have been reports of lights in the rooms, sometimes static, sometimes moving; never are they explainable.”

The unexplainable phenomena that the tour revealed makes people wonder, are parts of Central Michigan University’s campus haunted by those of the past?