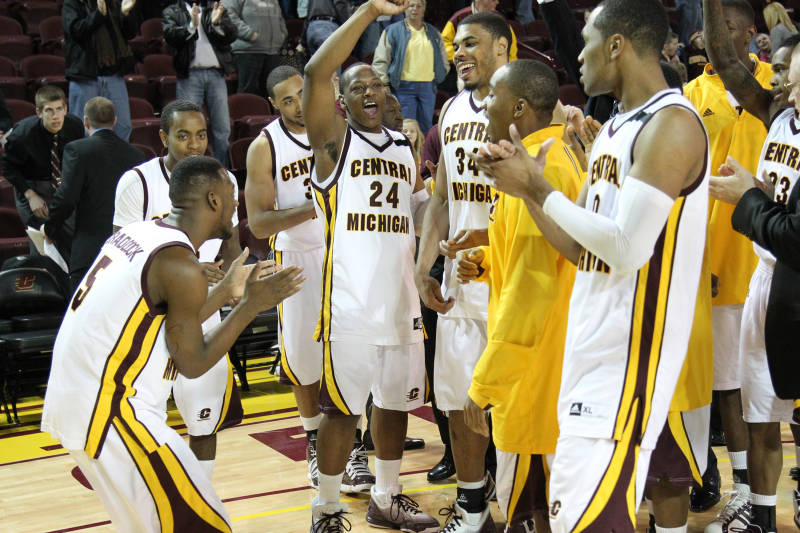 The Central Men’s Basketball team has entered into what is widely known as the “stretch” portion of their schedule. With just a game remaining, wins have an increased importance, as teams look to better position themselves for conference tournaments.

The rival Eastern Michigan Eagles came into McGuirk Arena on Feb. 16 with the same record as Central. Central was looking to right its previous wrongs following an embarrassing defeat at the hands of Eastern down in Ypsilanti on January 23 when the team only scored 38 points, including just 13 in the first half.

Central would need to look for a hero early in the first half as Eastern raced out to a 12-4 lead six minutes into the game. While Central fans could expect the usual heroics from freshmen phenom Trey Zeigler, Central would get a standout performance from an unlikely source, a walk-on and now starting point guard John Morris.

Morris finished with 11 points but would hit two three pointers in the first half to help surge the Central offense.

“I always feel pretty comfortable out on the floor and (Eastern) was sagging off of me so I was shooting the ball with a lot of confidence,” Morris said. “It has been feeling really good to be playing and taking part in the games with these guys and helping them as much as I can.”

As for Trey Zeigler, Central fans may be seeing his best performances come at just the right time. Zeigler would finish 11-14 from the field, including a game high 24 points.

More importantly, Zeigler was able to play the role of closer as he would score the game’s final four points from the field to put away Eastern, 66-60.

For Zeigler, the previous game against his rival from Ypsilanti gave him all the motivation to make sure the second meeting had a different outcome.

“It got real personal down the stretch. (Eastern) had said some things last game and they were talking this game. It was back-and-forth and I had to let them know (we weren’t going to lose),” said Zeigler.

The youth-infused Central team is learning how to win down the stretch and in the process is starting to show some of the potential that so many Central fans had hoped and dreamed of from this team at the start of the season.

“I think you saw the continued maturation process of our young guards tonight,” said Head Coach Ernie Zeigler. “We had a great team effort tonight.”

Learning how to close out games and picking up wins is just one part of the maturation process of a basketball team. Central finally looks like and is playing the part of the back- to-back Mid American Conference West Division Champions that they are.