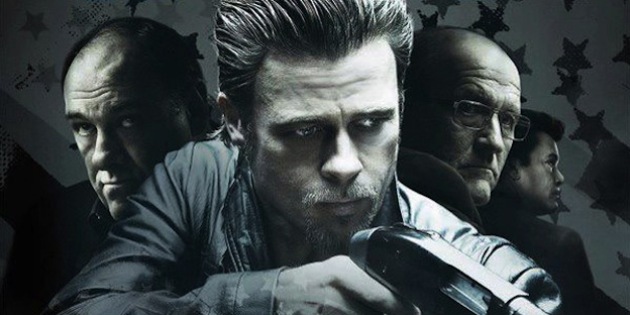 “Killing Them Softly” is a blunt critique of modern American society set against the backdrop of the 2008 elections.  It takes place inside an organized crime syndicate whose true power is never really revealed.  What is revealed is that Brad Pitt is an enforcer, and that he is very good with a shotgun and telling people he’s going to kill them.

This movie is directed by Andrew Dominik, who also collaborated with Pitt in the much better 2007 movie “The Assassination of Jesse James by the Coward Robert Ford.”  Their latest endeavor is too vague to be revelatory and enjoys showing violence too much to say something with it.  It is highly stylized and wonderfully filmed, but ultimately empty.  It hinges on Pitt’s on-screen charisma, which is as intact and tongue-in-cheek as always.

James Gandolfini, Richard Jenkins and especially Ray Liotta provide terrific supporting characters in an otherwise weak men’s club of a cast.  Liotta takes one of the most brutal beatings in recent movie memory after it is suspected that he set up the robbery of one of his own illegal poker games.  In fact, it was two beginning lowlifes (Scott McNairy and Ben Mendelsohn) looking for a quick payday, as it often is in these kinds of movies.

Injecting snippets from coverage of the 2008 elections does little to heighten the story above its own self-made constraints.  Once the initial robbery occurs and the major characters are set up, it turns into Pitt killing the various people involved with reckless abandon.  The only time the political angle pays off is in the terrific last conversation between Pitt and Richard Jenkins, where they discuss his payment for all the killings. Surely this scene ties together plot strands, but the whole thing seems thrown together rather recklessly.