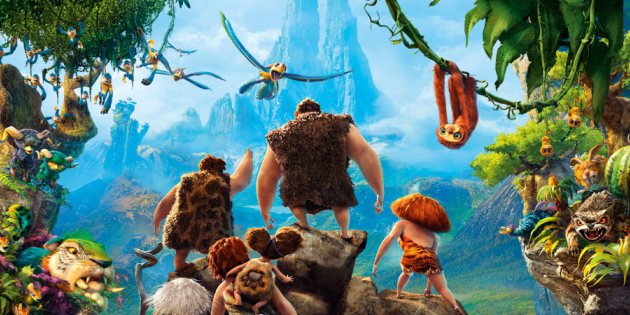 Audiences expecting “The Croods” to be another overdone, recycled, family-fun, cliché kind of movie are slightly right. There are many clichés in the film including the whiny teenage daughter and the overprotective father. Despite this, using very common storytelling techniques, “The Croods” offers viewers a good-hearted, charming adventure with beautiful animation.

The film is centered around a teenage girl named Eep Crood (voiced by Emma Stone) and her cavemen family. They are the only family to have survived their harsh environment because her father Grug (voiced by Nicolas Cage) keeps his family mostly hidden in a cave, constantly warning them to never trust anything different or do anything new.

Not surprisingly that doesn’t sit well with the strong-willed Eep and one night she decides to leave the cave. She meets a boy (of course) named Guy. Guy warns her that the world is ending and suggests that she leaves. After refusing to do so, he gives her a conch in case Eep needs help. The next morning, the Croods’ cave is destroyed in a landslide.

After the dust of the landslide settles, the family discovers there is a whole other environment beyond their cave filled with animals and plants they have never seen before. The desperate Croods call Guy to teach them how to manage and survive without the security of the cave and Grug must learn how accept his family taking direction from Guy.

Although there are many clichés in the film, it does make a few choices that set it apart. One important choice was altering the emphasis from the teen relationship of Eep and Guy. There is never a great big kiss scene and they never run off into the sunset together. In fact, it seems that Guy can’t decide if he is completely infatuated with Eep or put-off by her. This, in turn, makes their relationship seem more realistic.

Another good decision was to not have a villain in the storyline. The antagonist of the film is nature. The Croods are simply trying to survive their surroundings and it makes for a more interesting movie, helping the film from feeling cheap and calculated.

“The Croods” does a great job of making all the characters entertaining and charming. Each of the side characters is given a gimmick to make the audience entertained. It might be a simple way to create humor, but creates humor nonetheless.

However, the crowning achievement of “The Croods” is the animation. Although some characters are drawn a tad strangely, the rest of the movie can only be described as gorgeous. Filmmakers used the prehistoric environment to their advantage and backgrounds look so incredibly realistic that audiences may find themselves forgetting it is computer generated imagery. Despite it being early to predict awards, it would be disappointing if the animators don’t receive an Oscar nomination.

The film is cute, enjoyable and visually stunning. “The Croods” probably won’t become an animated classic, but its likeable characters and magnificent animation make it worth seeing.