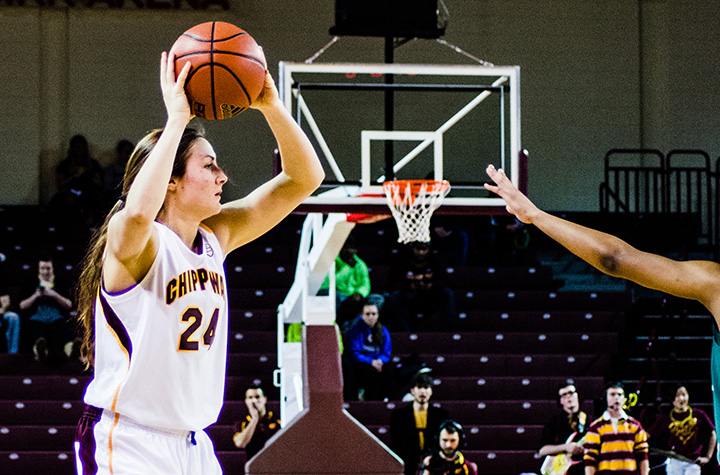 Senior guard Niki DiGuilio scored a game-high 24 points and converted eight of 12 3-pointers, as Central Michigan (16-8, 12-0 MAC) remained undefeated in the Mid-American Conference with a 88-47 victory against Miami (OH) (7-16, 3-9 MAC) on Saturday at McGurik Arena.

“I only have a few more games left,” DiGuilio said. “This is my last hurrah, so if I have a poor game I have to let it go. I wasn’t letting it go. I want to finish the season how I want too. My game is my teammate’s game and without them I wouldn’t have had those 24 points.”

Saturday’s performance by DiGuilio moved her into second place in the CMU single game record book for 3-pointers made. Coach Sue Guevara said she was happy to see DiGuilio’s game come together today.

“She has a great deal of confidence and has ice in her veins,” Guevara said. “I just hope when she gets the ball she keeps shooting it.”

In the second half, Central Michigan shot 63.3 percent from the field compared to Miami’s 31.0 percent. Limiting turnovers from 10 in the first half to three in the second allowed for a brilliant performance after halftime.

Guevara said the Achilles’ heel of the team has been free throw shooting as of late.

“If you don’t make free throws you don’t win championships,” Guevara said. “You have to go to the line with the same routine every single time and you have to say I’m going to make this free throw, not I hope it goes in.”