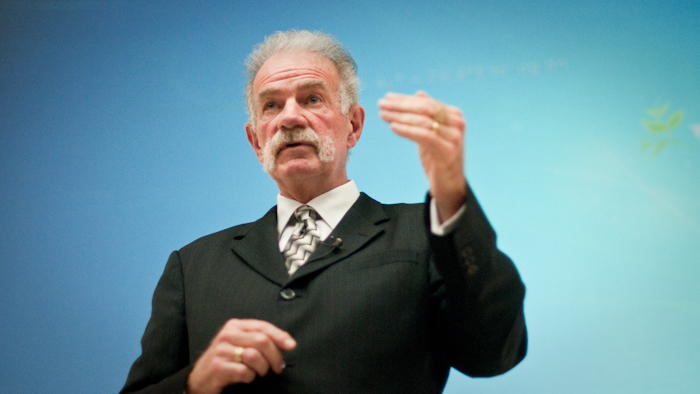 Terry Jones is a reasonable man. In his presentation in Pearce Hall on Nov. 9, he was willing to listen, debate, and even encourage free thought among students. Jones is a pastor at the Dove World Outreach Center in Gainesville, Fla., and intends to run for president.

He has also set flame to the Quran, suggested “monitoring” of all mosques across the country and on many occasions has denounced the entire Muslim community. His two daughters have disowned him. Jones claims he has received nearly 400 death threats, and anyone willing to follow through reportedly would pocket a swift $2.4 million from the Muslim political party Hezbollah.

So, why in the world would we need more Terry Jones’?

It’s simple, really. The world doesn’t need another Terry Jones, it needs more people like Jones — people who are not afraid to stand up for something with opposition from the masses; people who believe in freedom of speech for everyone and don’t shun those who exercise their rights in an offensive manner.

Quran burning not your thing? Well, (surprise!) mine either. I certainly do not agree with it nor do I support the specifics of Jones’ oftentimes contradictory approach toward Muslims, but recognizing the rights of individuals guaranteed by the First Amendment is something we should all take part in.

Sure, his ideas seem outrageous and have even been the cause of death overseas, but does this mean Jones must be silenced?

The fact is that censoring Jones would be a restriction of his First Amendment rights — the same basic, essential set of rights that we all enjoy. Simply because his speech offends does not mean that he should be censored nor should his rights be compromised.

Still, wars have been fought and an infinite amount of lives have been lost due to conflicting theological differences put into motion through freedom of speech. Jones’ effect on Muslims in Afghanistan has only worsened the image of the U.S. in the eyes of the Muslim community. It may even be argued that his actions have jeopardized the safety of the nation, which can be noted in the attacks on the U.N.

But to quote Ben Franklin: “Those who would give up essential liberty to purchase a little temporary safety, deserve neither liberty nor safety.”

And that’s exactly the issue here. To suppress Jones without good reason may grant possibly the entire nation with a sense of safety, but the cost of sacrificing essential rights to obtain that safety is not worth paying.

So critique, disagree, reject, protest, ignore or share any opinion you have on the man. Call out his incongruous philosophy. Recognize the inconsistencies within his approach. But silencing someone like Jones is not the answer. Consider him a demonstrator of the extent of your rights to speak freely.

Let liberty prevail and freedom apply to everyone and know your rights — but also know that everyone else possesses the same rights you do.

Including the right to grow a wicked ‘70s-esque mustache.