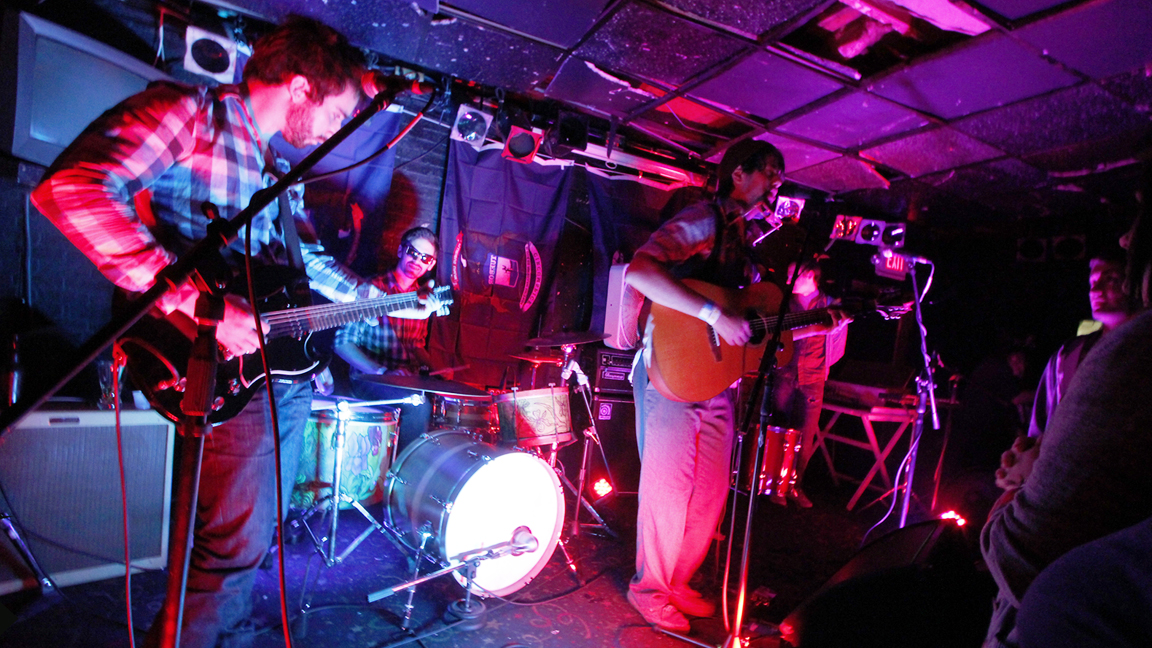 Joe Hertler once wrote a short story in which a husband and wife die in a car accident. The couple is fighting when the narrative shifts from their argument to imagery of their bodies being tossed around the vehicle. They eventually land on the hood of their car as their souls leave them, and as Joe describes, “fly into space.” The piece didn’t thrive as fiction, but it did inspire the song “We Are Everything” off his sophomore album On Being. It’s the kind of influence reflective of the many creative mediums and concepts that encompass Joe Hertler & The Rainbow Seekers.

“I kept it on the record because it went along with the ‘what it means to exist’ kind of theme,” said Joe on the song that’s become the album’s catchy cover. The Central Michigan University student is in his fifth year of college, but third year of producing music that’s made his band a household name in venues from Mid-Michigan to East Lansing. His new album On Being spans the topics of religion and existentialist philosophy, making for pensive lyrics with a folk-meets-orchestra sound.

Joe started singing when he was “about three, in the shower,” but wasn’t always drawn to the folksy tunes he’s producing now. He played standup bass and cello in high school, with plans to pursue music education at Central. But his rejection from his preferred orchestra in the School of Music proved opportunity in disguise—Joe used graduation money to pursue a seemingly opposite genre. He bought an acoustic guitar.

“Folk music just kind of fell in my lap,” he said. Joe was originally influenced by the likes of Sufjan Stevens and Tim Kasher of Cursive, but admits it was the acoustic guitar that invoked his pull toward folk. He produced his first album, the Hard Times LP, during his sophomore year in 2009. He recorded the bulk of the self-release in his dorm room. “It was just me and a couple microphones,” he jokes. The first album was freshman in both rank and context—the lyrics were written when Joe was just coming to college. “A lot of the songs are soppy breakup songs and it’s hard for me to even listen to them now—it just makes me feel like a little kid,” he said.

Joe says On Being reflects his growth in maturity, both personally and musically. “Sonically, it’s much, much cleaner,” he said. “It’s a fully produced record. It sounds professional. It sounds full.” The album is released through the record label Bigger Brush Media.

And Joe isn’t the only one who thinks the album is cohesive. Ryan Hoger, also a student at Central who plays electric guitar and sings backup vocals for The Rainbow Seekers, said recording involved input from each band member. The pair met in 2009 after Joe saw him perform with his other band Jetpack On! Ryan recommended Joe come to Kaya Coffee’s open-mic nights and the friendship turned into a two-man show: Joe singing and Ryan playing the banjo and accordion. The first song they ever played together was “Devil, Don’t You Steal My Bicycle,” which is on On Being. “I wrote it and he had a banjo and just picked it up and played it—and he’d never touched one in his life, but he’s a good musician,” Joe said.

Ryan and Joe met their other bandmates at a small show in Lansing—Kevin Pritchard and Rick Hale, both graduates of Michigan State University, had been playing in the band Loon. They eventually recorded the Quilted Attic Sessions with them and made their collaboration official on New Year’s Eve 2010 during Mittenfest. “This record release is like our marriage,” Joe said.

The band members recorded On Being individually, but bounced ideas off each other. “I kind of go in there with a song—kind of a skeleton and they throw the meat and bones on,” Joe said. The composition, lyrics, and structure of each song are Joe’s corner of their music. Kevin plays bass and backup vocals, Rick plays the drums, and their newest member Shawn Henry Adams is what the band refer to as their “ox guy”—the force behind the tambourine, banjos and other instrumentals that compose the band’s quirky sound.

But the core of On Being isn’t just the Edward Sharpe-like symphonic touches, but the meaty lyrics that make its listeners think—not just hear. The album doesn’t feature any love songs, but was written after another kind of falling out. The record deals with religion in a psychological sense and from an agnostic perspective.

“I would hope the questions that are being asked in the album are questions that people ask themselves,” Joe said, after citing what he’s learned in religion and philosophy classes as the root of the album’s motif.

Joe’s favorite song on the album is “J.L. Hudson.” It’s a narrative centered on the old Hudson building in Detroit—but figuratively about the convoluted metaphors of Joe dealing with faith and the idea that “all great things come to rest.” The flagship store on Woodward Avenue that once stood as an iconic piece of the city was eventually imploded.

The song “Carbon C14,” which he admits gives religion more of a negative connotation than he’d liked—“it’s not a song to be played at church”—is the most provocative. “No one wants to admit that they’re just an animal,” he said. “We don’t want to believe that we’re going to die and that’s it.” Joe recalls the first law of thermodynamics and musingly adds, “Matter is never created nor destroyed.”

Though he may not be the next Sartre, the album does its role in conjuring meaning—and attention. John Bee of American Opera, who has played with Joe Hertler & The Rainbow Seekers, says Joe is one of the best songwriters he’s heard hailing from Michigan. “His lyrics have substance and you can tell he means what he sings,” he said.

The professor and poet Robert Fanning at Central, who has taught Joe in several creative writing courses and has invited him to play at Mount Pleasant’s Wellspring Literary Series, says Joe is on his way to major recognition. “The power of Joe’s voice, his melodies, his lyrics—he has the stuff to launch a successful music career, for sure,” Fanning said.

Though Joe has the reputation and resume, don’t just call him a “music person.”

“It’s my talent, but I think I’m just more of a creative person,” he said. “I think my talents lie in being proactive creatively.” Folk may exist as Joe’s main outlet, but it’s not his only form of expression or taste—his favorite album is Illmatic by NAS, he was in a metal band in high school, he’s currently delving into spray-painting, and not to mention his popular electronic project, DJ Dry Bones. “I just try to surround myself with different creative mediums because I think they all—even if they may be totally different—can inspire each other in this weird way,” he said.

Joe wants to be known in Mid-Michigan for his own music, but isn’t ousting the idea of an electronic element someday entering Joe Hertler & The Rainbow Seekers. Ryan says the folk orchestra fusion on On Being—the confection of violins, trumpets, and acoustic guitar on certain songs—represents the experimental nature of their music. “I can already tell that things are starting to get weird,” he said. “I have a feeling whatever our next album releases is going to be way… crazier.”

And their shows are a spectacle in themselves. From fog machines and kaleidoscope lighting to confetti canons blasting and sword props, there’s never a dull moment on stage.  “It’s just fun for us—we get all these ridiculous ideas,” Ryan said. “Why not just have a bubble machine?”

Extravaganza aside the band’s performances also create an energy Joe calls “cathartic”—the moment he has on stage when nothing else matters but the music. “There’s no past, there’s no future, there’s only you,” he said, referring to the performance high. “And that’s kind of what art is–why I think art is important to me—because I do have that chance to fucking lose it and I love that.”

Joe hasn’t been the only one in a trance. Ryan says one of the reasons he encouraged Joe to play with with him was because of his performance power. When the group played at a heavy metal festival earlier this year, Ryan says the raucous crowd suddenly fell silent and stared—in a good way—during their entire performance.