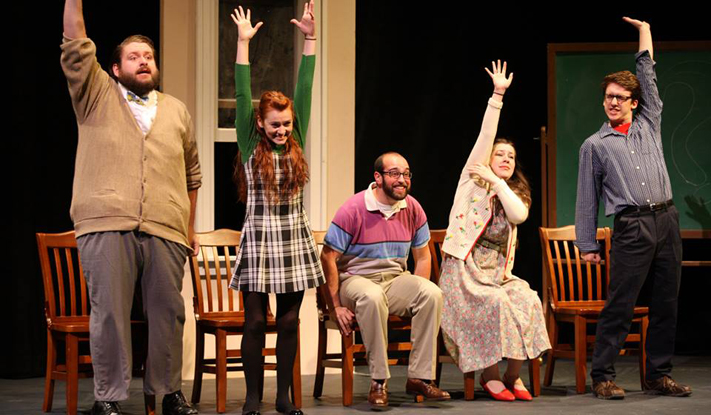 “That’s what you’re going to school for? What’s your backup plan?”

“You just signed that major so you can goof off.”

“I can’t believe you’re pursuing that career. I hope you’re okay with waiting tables the rest of your life.”

These are a few comments that I’ve heard over the past four years of college. I’m pursuing a Bachelor of Science in Theatre and Interpretation with a concentration in acting because I have been in love with the performing arts since I was in elementary school. While I wasn’t originally going to go to college for theatre, I couldn’t fight it any longer and signed my major after taking an acting class at CMU.

To me, it doesn’t make sense to do anything other than follow my dreams. Sure, it’s going to be difficult and very few people actually “make it big,” but that’s not my goal.

Being successful in theatre means so much more to me than earning a fat paycheck. I would rather fall asleep at night knowing I’m doing what I love and not making a ton of money, than working a job I absolutely despise being a millionaire. Most people don’t believe that.

I sincerely believe my job will affect every aspect of my life. If I don’t enjoy my job, I’m going to have a tough time being a happy person.

It’s amazing to me how many people will encourage students to follow their dreams — until their dreams seem out of the ordinary.

Theatre students aren’t the only ones who consistently get ridiculed either. Billy Mathis, an English major and speech minor for secondary education at Central Michigan, said he usually gets comments about not making any money or being a lame teacher.

“The whole ‘those who can’t do, teach’ really upsets me and belittles the process of teaching,” Mathis said. “It makes educators seem pathetic and that is so far from the truth.”

Brian McKnight is part of another field that receives constant judgment. He is a fifth-year student at Central, where he is pursuing a Bachelor of Applied Arts in film production with a minor in cinema studies. He said, “film is one of those fields that either you have the skills to succeed or you don’t.”

Sure, he could spend years teaching himself how to shoot and edit a film, but getting a degree in film production provides him with the necessary skills he needs and puts him in an educational setting where he can get more experience. Film production isn’t limited to Hollywood feature films either. With a B.A.A., Brian can film weddings and concerts or work with musicians to make music videos. The possibilities are endless.

I’ve remained positive about my career choice because I know I can do so much more than anyone expects with a theatre degree. I can pursue acting, designing, directing, teaching, and playwriting. My degree requires excellent skills in communication and public speaking, not to mention the ability to work well with others. The skills I’ll take away from college will assist me for the rest of my life — even if I choose to pursue something other than theatre later on.  As McKnight put it, “If you really have the passion, then a career is out there for you.”

Here are a few pieces of advice for those of you who are still unsure about pursuing your dream career:

Do your research so you know what jobs pertaining to your degree are out there. Senior Maggie Herrinton is earning an English degree and plans to work in legal research and writing when she graduates. She hopes to eventually graduate from law school and maybe one day run for office. In Herrinton’s case, she gets to use her love for literature and reading to pursue a job in law.

2. Talk to people around you

Your parents will certainly have advice for you, and that advice might be to consider all other options first. By talking with my friends who are in theatre and meeting with my advisor, I was able to reassure my parents that getting an art degree doesn’t mean I’ll be living on the streets and starving the rest of my life. Theatre is everywhere, and once I knew that, my parents felt relieved and continue to fully support me.

You’re young, you’re smart, and you’re talented. You have your entire life to change your mind. No matter what degree you pursue, someone will think it’s a bad idea, so go ahead and do what you want. This is your life and you need to be happy. After all, you’re the only one who will have to live with the regret of not chasing your dreams.